Last week, the Telecom Regulatory Authority of India (TRAI) issued a consultation paper on promoting local telecom equipment manufacturing in India and invited comments from readers.  I believe that this is a great opportunity for all stakeholders to provide their comments to the TRAI.  The paper may be downloaded from here or by going to the TRAI site and then at publications / consultation papers.

The deadline for submitting comments is 16.OCT.2017 and may be emailed to arvind[AT]trai{dot}gov{dot}in and bharatgupta{dot}[email protected]{dot}com

I extract the questions related to patents and FRAND for readers convenience below:

While we are disscussing TRAI, I would take this opportunity to comment on the ongoing turf wars between the TRAI and the CCI.

In my personal view, inter agency cooperation is the name of the game and there is no room for clashes or strict jurisdiction boundaries between government agencies.  if this does not happen, we may have the equivalent of roads like in Delhi: In the past multiple agencies dug up roads at their convenience without asking other bodies, resulting into perennial chaos. 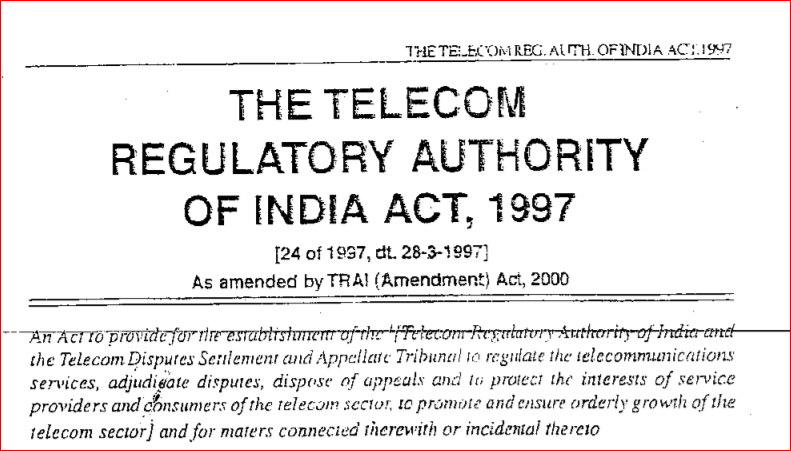 From this view, it is natural that agencies co-operate to serve the consumer interest.  Consumer interest may be determined much differently between agencies.  For example, the TRAI may not view cost of capital for a company for obtaining spectrum as being a factor.  I am discussing the case of Reliance Industries where cost of capital for Reliance is (much) less than for Airtel or Vodafone etc.  However, the question is should the TRAI or CCI take a view on this question?  As mentioned, a joint view may be issued by the agencies.

Let us take another example: Recently the Bombay High Court reversed the CCI order to investigate cartelization between Airtel, Vodafone, Idea, on a plea brought in by Reliance Industries.   The Bombay HC viewed that only the TRAI had authority to determine any issue related to telecom.

The Authority under the Competition Act has no jurisdiction to decide and deal with the various statutory agreements, contracts, including the rival rights/obligations, of its own. Every aspect of development of telecommunication market are to be regulated and controlled by the concerned Department/ Government, based upon the policy so declared from time to time, keeping in mind the need and the technology, under the TRAI Act.”

This view taken by the Bombay HC is incorrect:  Cartelization is defined under the Competition Act and not under TRAI Act. Similarly predatory pricing is defined in the Competition Act, not TRAI Act.  Hence, even if TRAI has the mandate to decide the issue of cartelization in telecom, it must necessarily rely on the skill set of the CCI.  If one can borrow definitions, definitely, it can take the view of people who have experience in the domain.

The TRAI not approaching CCI to discuss / decide in my view, is wastage of public money.

Given the recent paper issued on IUC by the TRAI, I suspect that the above ruling may be challenged soon.  TRAI may have filed caveats in as many as 15+ High Courts across the country, it will be a tough case:  How can TRAI defend IUC without resorting to show that pricing is / or is not predatory pricing.

As an end note,  I believe that Reliance Industries should have brought in the case at the Delhi High Court rather than at Bombay.