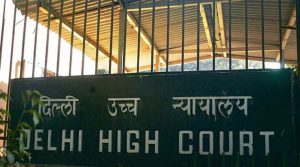 The Delhi High Court, in its judgement in Icon Health And Fitness, Inc vs Sheriff Usman And Anr., delivered on September 12, has held that the presence of the Defendant’s business on online portals such as Amazon or Google Play is sufficient to establish the court’s jurisdiction over the defendant, in a suit for passing off of a trademark.

The plaintiff, a US-based company, filed a suit against the defendants, companies based in India and the UAE, alleging passing off of their trademark, iFIT, which was used, among other things, in the plaintiff’s online fitness software and sold through Apple’s App Store and Google’s Play Store.

The defendants did not appear, nor did they file their written statement in response to the plaint. Therefore, the suit was proceeded with ex parte. The court framed two issues for determination –

The Court made a bare reference to the fact that the defendant’s allegedly infringing products were available online and could be accessed from ‘all over the country, including from Delhi’, and then went on to hold that the defendants could be said to be ‘carrying on business’ in Delhi, for the purpose of territorial jurisdiction of the Court under Section 20 of the Code of Civil Procedure, 1908. In support of its conclusion, the Court cited its own judgement in the case of World Wrestling Entertainment, Inc. v. M/s. Reshma Collection & Ors. (Which we reported on here)

The Court briefly touched upon the requirements for trans-border reputation of a trademark by referring to its judgement in Prius Auto Industries Ltd. & Ors. v. Toyota Jidosha Kabushiki Kaisha, and then went on to hold that the plaintiff had established cross-border reputation without providing any reasons for the same.

Online Disputes and the Floodgates of Forum Shopping

The Delhi High Court has continued its trend of assuming jurisdiction in online disputes, notwithstanding tenuous connections between its jurisdiction and the parties or actions involved in the dispute.

Section 20 of the CPC states as follows:

“20. Other suits to be instituted where defendants reside or cause of action arises – Subject to the limitations aforesaid, every suit shall be instituted in a Court within the local limits of whose jurisdiction—

(a) The defendant, or each of the defendants where there are more than one, at the time of the commencement of the Suit, actually and voluntarily resides, or carries on business, or personally works for gain; or

(b) any of the defendants, where there are more than one, at the time of the commencement of the suit, actually and voluntarily resides, or carries on business, or personally works for gain, provided that in such case either the leave of the Court is given, or the defendants who do not reside, or carry on business, or personally work for gain, as aforesaid, acquiesce in such institution; or

(c) the cause of action, wholly or in part, arises.”

In ICON, the Court assumed jurisdiction under Clauses (a) and (b), stating that the defendants ‘carried on business’ in Delhi. The entirety of the Court’s reasoning for the above is contained in two sentences –

“Though the defendants are not residing in Delhi, however, the defendants are offering their fitness apps and bands through App Store, Google Play Store and e-commerce portals like www.amazon.in which can be accessed and operated from all over the country, including from Delhi. Thus, it can be said that the defendants are carrying on business or working for gain at Delhi and this Court has territorial jurisdiction to try and decide the present suit.”

The above extract gives absolutely no indication as to how the Court arrived at the conclusion (that it has jurisdiction) from the premise (the defendant’s products being available online). The Supreme Court in the case of Dhodha House v. SK Maigni laid down three conditions for determining whether a company ‘carried on business’ in a particular jurisdiction:

In ICON, the Court cited its judgement in WWE v. Reshma Enterprises to support its conclusion on the issue of jurisdiction. The merits of that decision notwithstanding, the facts in ICON can clearly be distinguished – in Reshma, the Court found that the plaintiff carried on business in Delhi by selling their goods directly through their own website, and not through an agent, thereby seemingly satisfying the third condition laid down in Dhodha House. However, in ICON, the Court was concerned with the defendants selling their products through online intermediaries including the App store and Amazon. Without coming to a conclusion as to whether these intermediaries acted as agents while offering the defendant’s products, the Court appears to have lifted the proposition from Reshma, that “…the availability of transactions through the website at a particular place is virtually the same thing as a seller having shops in that place in the physical world.” and therefore selling products on any of these intermediaries would also constitute having a place of business wherever they are accessible. Further, the Court in Reshma considered evidence of the plaintiff selling its products in its jurisdiction before coming to its decision, which was not the case in ICON.

The implications of the ICON judgement are far-reaching. While Reshma’s ratio was limited to intellectual property disputes under the Copyright Act and the Trademark Act, ICON can potentially be used to justify any court in the country assuming jurisdiction in any kind of online dispute, wherever the defendant’s content can be accessed. This is important, as the business models of several intermediaries (including amazon.in) do not always place geographical limitations on sellers who use the platform, particularly in the case of digital products. As the internet is necessarily universally accessible, the implication is that any defendant in any part of the world can be brought to any court in the country, as long as their content or product is accessible within that jurisdiction – which sets a dangerous precedent.

This kind of broad and vague limitation on jurisdiction paves a clear way for unscrupulous litigants to engage in forum shopping, a practice where a plaintiff would approach a jurisdiction not because of any real connection to the dispute, but because of a greater likelihood of success. Unfortunately, this judgement regresses on a trend where the Delhi High Court has been attempting to restrict forum shopping, which we recently wrote about here.