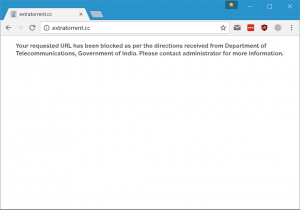 Online piracy, that bugbear of copyright owners, has received significant attention from courts in India and abroad, which hope to craft an elegant solution to protect rightsholders interests in a digital economy, who face inherent limitations considering the manner in which data sharing and information flows over the internet work.

The Delhi High Court through its judgement in UTV v 1337x.to, delivered on April 10, has made a significant contribution to this jurisprudence in India, particularly by crafting a new remedy of a ‘dynamic injunction’, whereby rights-holders do not need to go through the ‘cumbersome’ process of a judicial order in order to issue blocking orders to ISPs. Instead, as per this ruling, the plaintiffs have been allowed to approach the Joint Registrar of the Delhi High Court (an administrative position), to extend an injunction order already granted against a website, against a similar ‘mirror/redirect/alphanumeric’ website which contains the same content as the original website.

Mr. Justice Manmohan’s order is important for its detailed consideration of the issues involved in issuing website blocking injunctions, (at least compared to similar blocking injunctions we have seen in the past) as well as for the unique final remedy crafted to secure copyright holders’ interests in the form of a dynamic injunction.

The plaintiffs, including UTV Software Communications Ltd., are companies engaged in ‘creating content, producing and distributing cinematographic films around the world including in India’. The defendants are, inter alia, thirty identified websites, along with John Doe defendants, the Ministry of Electronics and Information Technology, the Department of Telecom and various ISPs.

The plaintiffs contend that the defendant websites host and provide access to their copyrighted works, in a manner which infringes their rights under the Indian Copyright Act. The plaintiffs provided access to a sample of such infringing content as evidence that the websites were primarily engaging in online piracy.

The principal defendants (the websites) did not respond to the summons, presumably since they are hosted outside of India. However, as the issues were deemed to be questions of law ‘of general public importance’, the Court appointed an amicus curiae, Mr. Hemant Singh, to assist the court with its determination on the questions of law.

The Court outlines seven issues for determination, which are dealt with point by point –

The court answers this in the negative, holding that the distinction sought to be made by ‘internet exceptionalists’, between online and offline infringement is an artificial one, and states that “there is no logical reason why a crime in the physical world is not a crime in the digital world especially when the Copyright Act does not make any such distinction.”

Once again, this strangely-framed issue is answered in the negative. According to the Court, “…the key issue about Internet freedom, therefore, is not whether the Internet is and should be completely free or whether Governments should have unlimited censorship authority, but rather where the appropriate lines should be drawn, how they are drawn and how they are implemented.”

This issue is at the crux of the case, since the injunctions are directed against supposedly ‘rogue websites’ or, using a term the Court borrowed from the Singapore Supreme Court, Flagrantly Infringing Online Locations (FIOL). The Court states that such websites are those ‘which primarily or predominantly share infringing content’. The Court then outlines some indicative factors which can be used to determine whether a service is an ‘FIOL’, including the volume of traffic received by the website, or whether it contains indexes or categories which provide the ‘means’ for infringement.

Strangely, the Court sidesteps the issue of determining whether any of these rogue websites are liable to intermediary liability protection, an issue which, in my opinion, is central to the case, and which I will come back to in my next post.

However, the Delhi High Court pitted this against its own composite bench judgement, which applied a ‘qualitative’ view to blocking injunctions, and held that such injunctions should be granted where there the ‘rogue websites’ are ‘overwhelmingly infringing’. The Court held that, requiring the copyright owner to identify each infringing element would place too onerous a burden on copyright owners, particularly in instances where these websites can easily change a URL which has been taken down or blocked.

The Court answers this in the affirmative, after looking into the ‘factors’ outlined regarding when a website can be termed a rogue website, including whether the owners mask their ownership details, whether there is ‘disregard’ for copyright, whether the website provides indexes and databases leading to infringing content, and, importantly, whether other jurisdictions have treated such websites as infringing websites. Considering all these factors (as per the plaintiffs affidavits), the Court held that all of the defendant websites are rogue websites.

Stemming from its determination above, the Court held that “…This Court is of the view that while passing a website blocking injunction order, it would have to also consider whether disabling access to the online location is in the public interest and a proportionate response in the circumstances and the impact on any person or class of persons likely to be affected by the grant of injunction. The Court order must be effective, proportionate and dissuasive, but must not create barriers to legitimate trade. The measures must also be fair and not excessively costly.” The Court notes that any website blocking must be necessary and proportionate and commensurate with the nature of the infringement, as well as whether legitimate content is being blocked. However, it does not proceed with analysing whether these conditions are being met in each of the specific cases, proceeding on the concluded assumption that these are rogue websites, and that blocking the websites in their entirety is both necessary and proportionate to the needs of the rights holders.

Finally, perhaps the most significant aspect of this judgement is that it creates a new procedure to extend website blocking injunctions beyond those specified in the court order, to those websites which are ‘mirror/alphanumeric/redirect’ websites created after the injunction orders, known as a ‘dynamic injunction’. The Court referred to the Singapore High Court’s decision in Disney v M1, where the Court, considered the issue of websites with different domain names or IP addresses providing access to a website which is the subject of an existing blocking order. The Singapore Court, in this case, crafted a ‘dynamic injunction’ whereby a plaintiff could file an additional affidavit stating to the court why a new website fell within the purview of an existing blocking order, and forwarding the same to an ISP, which could dispute the merits of the blocking order.

The Delhi High Court in this case notes that the ‘dynamic injunction’ stemmed from specific provisions of Singapore law. However, the Court held that it was within its inherent powers under Section 151 CPC to craft a solution of a similar nature, and that the plaintiffs could avail of a similar injunction by impleading additional websites under Order 1 Rule 10 of the CPC.

However, the court considers that the judiciary itself should not be burdened with constantly monitoring such affidavits and adjudicating upon their validity. The order therefore delegates the power to adjudicate upon the issue of additional websites being added to an existing blocking order to the joint-registrar of the Delhi High Court, who functions in an administrative capacity (mostly in dealing with matters of purely procedural importance). In this case, the power is delegated under very specific provisions of the law, namely Section 7 of the Delhi High Court Act, 1966 read with Chapter II, Rule 3(61) read with Rule 6 of the Delhi High Court (Original Side) Rules 2018. The same rules also allow an aggrieved party to appeal against the joint registrars’ orders.

Finally, the Court ‘directs’ the MeitY and the DoT, who are also defendants in this case, to consider a suggestion whereby they can come up with a policy for a graduated response scheme, where individuals who access ‘pirated content’ can be notified of the same by ISPs, and if they do not refrain from continuing such actions, they may be fined.