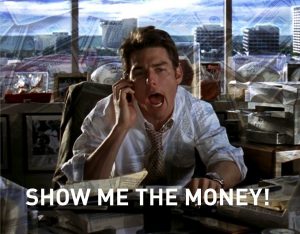 The World Intellectual Property Organisation (WIPO) was created in 1967 as an international, multi-stakeholder body to ‘encourage creativity and protect intellectual property throughout the world.’ It’s a matter of concern, therefore, when a body ostensibly meant to represent diverse interests in matters of intellectual property development chooses to develop a private, arbitrary and non-transparent ‘blacklist’ meant to target advertisement funding of websites.

WIPO’s latest proposal, known as the “Building Respect For Intellectual Property Database Project”, is described as – “a secure, access-controlled online platform, to which authorized agencies in WIPO Member States may upload lists of websites which deliberately facilitate the infringement of copyright. Legitimate players in the advertising industry are permitted as authorized users to employ the data contained in the lists to inform the placement of advertising on the Internet. By checking with the Building Respect for Intellectual Property Database (BRIP Database), advertisers can ensure that their advertising does not accidentally appear on copyright-infringing websites.”

The intention, according to WIPO, is to endorse a ‘follow the money’ approach to combat online infringement, namely, to starve funding to websites which are flagged as copyright infringing, and points to several jurisdictions where a similar approach has been followed. The WIPO points to the complex nature of the online advertisement system as a cause for infringing websites continuing to receive advertising funding, and sees this blacklist as a means to automate and streamline how advertising service providers, as well as advertisors, can effectively identify and block funding to ‘illicit’ sites, citing, among other reasons, the ‘brand dilution’ that takes place when an advertisors product ends up on an illicit website. 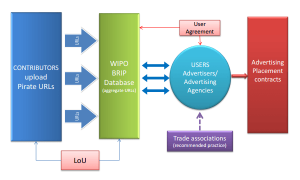 Schematic of the Operation of the BRIP Database. Source: WIPO

While happily endorsing the creation of a blacklist which could result in the shutdown of several websites, the WIPO proposal is startlingly silent on ensuring that legitimate websites and resources are not arbitrarily starved of funding by this automated and unverified system. Sample this paragraph where it nonchalantly washes its hands off any responsibility to ensure the authoritativeness of this list, and states that the inclusion is based on the mere suspicion of private parties –

“The operation of the BRIP Database is not based on any assertion by WIPO that any particular site has, as a matter of law, infringed copyright. Rather, the qualification for inclusion of a national list on the platform is that the list contains “sites of concern”. A site of concern is defined as “an online location which is reasonably suspected by an Authorized Contributor of deliberately infringing or facilitating the infringement of copyright and related rights, whether in its country of establishment or elsewhere”.

As for ‘Authorised Contributors’ who are allowed to submit proposals for inclusion on the list? It will be based on a secret User Agreement between the contributor and WIPO, the terms of which the proposal is silent upon. Ditto for the ‘Authorised Users’ allowed to access to the database. The proposal is silent on procedural or substantive safeguards, and there is no mention of due process or transparency requirements for the blacklist, and no manner for blacklisted websites to challenge (or even know about) their inclusion. (A similar ‘private blacklist’ has also been endorsed by India’s draft E-Commerce Policy, which we raised concerns about here.)

Two examples would indicate how absurd and inequitable this system could be in practice.

First, YouTube and similar major online platforms like Facebook, have significant amounts of infringing material, from which they also gain significant advertisement revenue. If this model were to operate equitably, it would mean that these websites in their entirety should also be blacklisted by advertisers, which all stakeholders would undoubtedly consider an absurd situation. Instead, it is likely that the blacklist would operate against smaller websites which do not have the international presence to resist the operation of such a blacklist.

This blog, for example, which to an extent relies on advertising revenue for its operations, was recently served a false copyright notice under another arbitrary and opaque scheme – the Digital Millennium Copyright Act in the USA. However, even that law provides certain redressal measures for affected parties. Following the procedure of the private system created by the WIPO BRIPS Database, we would be unable to know, let alone challenge, our arbitrary inclusion in such a blacklist, and could consequently be starved of funds.

The BRIP Database is another indication of the global trend of moving away from takedowns of specific-instances of copyright infringement which takes place through online intermediaries, towards the wholesale blocking of websites. The Delhi High Court recently endorsed similar approach through its proposal for dynamic injunctions of ‘Flagrantly Infringing Online Locations’, and courts across India have issues wholesale website blocking orders in lieu of URL or resource-specific takedown orders, an issue which we have repeatedly flagged. Over-blocking of online resources is a problem which has consistently arisen in the context of weakened protections for websites and online intermediaries, and poses immense challenges to an open internet’s vision of access to knowledge and information.

This shift subverts the common law and statutory concept of intermediary safe harbour for third party content, which protects innocent intermediaries from actions of third-party users. Further, by endorsing an ‘international’ private standard for what constitutes infringement and ‘piracy’, the WIPO is denigrating from its responsibilities of ensuring international comity by being cognizant of national copyright protections and exemptions which are specific to particular member-states of the TRIPS treaty, which provides leeway for member-states to define the contours of copyright protection granted in their jurisdiction.

Under the garb of tackling piracy, the WIPO is endorsing and facilitating a secretive, global system for removing funding from internet resources which are deemed ‘suspicious’ by private actors. The WIPO should introspect on whether this is the appropriate role for an international body meant to represent the interests of the international community as a whole.