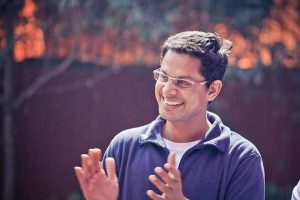 In several traditions, including those followed by Prof. Shamnad Basheer’s family, the 40th day after passing is a day of remembrance and marks the end of a mourning period. As posts, tributes and celebrations of Prof. Basheer’s life and work have poured in, some of the current and past team members of SpicyIP have written fond remembrances and eulogies, which we are publishing here today.

“The last 40 days have made me realize that some wounds are too difficult to heal, especially when they have come about as a result of someone very dear leaving your life. In a world which is full of skepticism and sorrow, Shamnad Sir was a beacon of hope and happiness. Although I do not think that I will ever make sense of Shamnad Sir’s passing, maybe, much like his wonderful personality, it is meant to be that way – an enigma.

Although in my five years at NUJS, I only saw him from a distance and we never even spoke once, our paths crossed later as I ended up becoming a SpicyIP Fellow. His ability to constantly encourage his fellow bloggers and the willingness to engage with each of us is a trait that is hard to find, and epitomized the man he was – someone who believed and invested in others.

Later on, as I quit my law firm job and was looking to transition to public law, Sir took me under his wings and made me a part of the P-PIL initiative he had set up at IDIA. It was there I had some of the best time in my professional career. As we worked together on the Aadhaar data security petition, he would make me revise the draft innumerable times to the point where I started to doubt my ability to finish it. I opened up to Sir about how I was overwhelmed by the task. Rather than shooing me away or berating me for not being able to work under pressure, he would gently ease me back into the task, throwing in a Rumi quote or two in the process!

Once LL.M application season started, I started hounding him for recommendations, and every time, irrespective of how last minute it was, he would be always there to help out. I will also never forget the numerous meals he treated me to at his house and outside.

I can go on and on. But, nothing that I will say is going to do justice to who he was. I think I will close by quoting one of his favourites, Rumi: “Death has nothing to do with going away, The Sun Sets and the moon sets, but they are not gone”. You will never be gone from our hearts, Sir.”

“I am Shan Kohli and I was Professor Basheer’s student at NUJS Kolkata. I would not normally write about someone I knew on a public platform but how could I not for someone who always encouraged and inspired me.

I knew Professor Basheer in various capacities – as his student at NUJS, his IP research associate and in more recent years he was a mentor, friend, guide and a towering presence in my life who always had my back. Though I did not eventually become a full time IP lawyer, he mentored and advised me throughout my professional career. I always felt I could approach him for anything and he would always be there to help me in every possible way. In college in his IP class, I remember how the entire class of approximately fifteen of us paid rapt attention and hung on to his every word as he broke down complex legal concepts and not only made them easier to understand but placed them in the larger context of the world view. We sat enthralled as the hours passed by and weren’t the least bit tired even though sometimes our classes stretched for as long as four hours in one sitting. That was one class I remember no one ever skipped their readings for! In fact it was the one of the few classes we looked forward to eagerly each week. Later on as his research associate, the rigour of his research tasks honed my skills and set the foundation which I would later rely on throughout my career. After law school, when I was shifting to the UK and needed help amidst some bureaucratic inefficiencies around paper work and finding a place to stay, he helped me without my even asking for it. For his students, Professor Basheer was always someone very approachable and someone you could always talk to about anything under the sun. Those of us like me who were fortunate enough to have been invited to his home in Bangalore will fondly remember how he would regale us with stories from his life or tell us about the latest books he was reading amidst his deliciously cooked organic home fare followed by a range of exotic teas. Professor Basheer has always been a guiding presence in my life motivating me to work harder and aim higher. With his loss I feel as if my safety net and guardian angel has gone. Like everyone who knew him, I cannot believe that he is really gone. Although this may seem painfully obvious, it will take quite some time for me to fathom that there will be no one on the other end of his Whatsapp number or email address anymore. I have very briefly recounted all the small but significant ways in which he helped me and changed my life but this is not my story alone. Multiply this into a 100 or 1000 or 10,000 stories and you will realise the impact Professor Basheer made across the lives of each of his students and the difference one person can make. He inspires me to be a better human being each day.”

“…After a lifetime of struggling to reform systems and processes that do not serve the objectives for which they were set up, it would be natural to expect a person to become disillusioned and embittered. So many such people that one meets experience a certain hardening of the heart, their emotional energy and vitality getting demented by the years of struggle and effort. Not Shamnad Basheer. He always imbued everything that he touched with so much warmth and compassion, energy and interest. Last year, even as he was not keeping well, he made it a point to have a detailed conversation with me before I left for Oxford. In that conversation, he told me, “Rahul, I often tell people that you will be India’s first visually challenged Supreme Court judge.”

Like the rest of us, Shamnad Sir was not free from imperfections. Those of us who have worked closely with him on any project vividly recall being on the receiving end of his inexplicable flashes of anger, his mood-swings and rigidity in adhering to certain views, once he had made his mind up about them. If you learnt how to negotiate these patterns of behavior which he sometimes exhibited, however, you would not get bogged down by them and be able to fully appreciate all his wonderful qualities which I have described above. In that sense, he was not a saint, in Nelson Mandela’s famous words, unless you think of a saint as a sinner who never stops trying.

They don’t make ‘em like Shamnad Basheer anymore. I will close this post with a few lines of tribute that I have written for Shamnad Sir, which I am confident he would have appreciated, given his love of poetry.

You left us too soon,

Courageous and bold and gifted with a heart of pure gold,

You got taken from us,

You were our lodestar, the person we aspired to become,

Through your effort and vision, courage and determination,

Which for most of us were only an aspiration –

We will miss your warmth and kindness,

Your fearlessness and the fire in your belly,

But we can pay no greater tribute to you,

Than to try and embody those values, no matter where we find ourselves, in whichever life alley –

The light has gone out of our lives,

But we will continue to endure,

For only then can we help take forward All that you stood for.”

I hope you are well, wherever you are now. There was a ringing in my ears as I read the deluge of messages announcing that you were ‘no more’. I was in denial that evening and adamantly remain in denial still – there is no erasing the mark you have left on this world through the institutions you have built and the people whose lives you have bettered.

I was an obscure novice, with a directionless ‘interest’ in copyright law when we first met. You had, incredulously, invited me to be your teaching assistant for a remarkable course at Nirma University, on AI and Copyright Law. Not only was the subject one which I hardly expected to be broached within the restrictive confines of our academic systems, but over and above that, you had deployed a fascinating pedagogical exercise to keep the students involved. Fascinated as I had been for years by the legendary Shamnad Basheer, I knew you only through your amazing work. What I didn’t expect was that the legend would treat me like a friend, and I have the fondest memories of discussing Hong Kong cinema with you while watching Enter the Dragon. Bruce Lee doesn’t hold a candle to you.

That brief stint teaching with you sparked an affair with the law of copyright and creativity which I have not looked back on since. It led to my involvement with SpicyIP and a lasting love for intellectual property law – moving beyond the law as abstract concepts, to using it a tool for empowerment and justice. From access to medicine to access to education, your life was dedicated to practicing the law as an instrument of social empowerment, something we tend to forget in our classrooms and offices. Your faith and encouragement in my work has left an indelible imprint on my approach towards the law – to not be afraid to speak truth to power, and to use the law to fight for a more just and equitable world – something I continue to aspire to, even though I stumble often. I suppose I will have to close my eyes and imagine the inevitable mail from you proclaiming “fantastic work, divij, you showed them!” after I hesitatingly publish my next pieces on this blog.

Your illness was tremendously concerning, but I never saw you without a beaming smile and kind eyes, and your strength in adversity will remain a constant reassurance in difficult times ahead. I was looking forward to meeting you next week, after your retreat, to discuss the future of this blog and innumerable other affairs. To have you unexpectedly leave this way has been tragic, but I promise to celebrate your life and work, and live up to your legacy and expectations. Thank you, from me, and from the countless other lives you have touched, for teaching us to fight and to create the world that ought to be.”