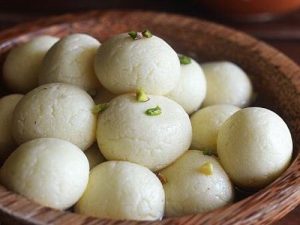 We’re pleased to bring to you an interesting guest post by Jupi Gogoi on the ongoing dispute between West Bengal and Orissa over the GI tag for rasgulla, which we’ve covered on the blog earlier here, here and here.

Jupi is an Assistant Professor at the Faculty of Law, University of Delhi. She was formerly associated with the Indian Law Institute, Delhi. Jupi has guest blogged for us in the past as well (see here).

The sweet taste of Rasogolla/ Rasagola took a bitter turn when the two states, West Bengal and Odisha started their fight on who owns this popular sweet under the Geographical Indications (GI) law. GI is an indication identifying a good as originating in a particular country, region or locality of that country. The reputation, quality, or characteristics of such goods are attributable to their geographical origin. On registration of a GI, registered proprietor of the GI and the authorised user or users can file for infringement of GIs. A registered geographical indication (GI) is infringed by a person who is not an authorised user but uses such indication in his or her goods that it originated in a geographical territory which is not the true place of origin. Such use misleads the consumer as to the origin of the good; uses GI in a manner that constitutes an act of unfair competition and passing off in respect of registered GI.

Decision of the GI Registry

In November 2017, West Bengal State Food Processing and Horticulture Development Corporation Limited got the GI registered as ‘Banglar Rasogolla’. It was reported that Bengal won the dormant fight between Odisha and Bengal on who would own the famous sweet. The legal fight for the GI registration began when an objection to the GI Registration was filed citing that the origin of this famous sweet was in the Jagannath Temple of Puri in Odisha (see the document numbered 11 here). An application for removal of the registration of the GI status was filed in February, 2018 which is still pending. In the meantime, in July this year, the GI Registry notified that Odisha got the GI registered as ‘Odisha Rasagola’, following which there were many reports stating that Odisha did not lose the race but got a tie. It is very important to note that the GI Registry has not given registration to the term ‘Rasogolla/ Rasagola.’ It has specifically prefixed two words to the GI tag, one is ‘Banglar’ and the other one is ‘Odisha’, thereby, implying that ‘Rasogolla/ Rasagola’ is a generic word which can be used by anyone in their trade and business. Thus, so far as the law is concerned, neither of the states has got a monopoly on the word ‘Rasogolla/ Rasagola’. So, it is free for anyone in the trade to continue selling the sweet as Rasogolla/ Rasagola or any other synonym. What is prohibited is the usage of the word ‘Banglar Rasogolla’ and ‘Odisha Rasagola’ by anyone other than the ‘authorised user’ under the law.

Was It Right to Give GI Registration to ‘Banglar Rasogolla’ and ‘Odisha Rasagola’?

This brings us to an interesting question that whether the GI Registry was right in granting registration to these GIs considering the fact that Rasagola/ Rasogolla has fallen in common use throughout the country? The sweet finds place in almost all sweet stalls throughout the country. The GI Act under section 9(f) states that GIs which are determined to be generic names shall not be registered as GI. Coming to what is a generic word, explanation to section 9 of the GI Act states that “generic names or indications”, in relation to goods, means the name of a goods which, although relates to the place or the region where the goods was originally produced or manufactured, has lost its original meaning and has become the common name of such goods. In determining whether the name has become generic, account shall be taken of all factors including the existing situation in the region or place in which the name originates and the area of consumption of the goods. The fact that West Bengal State Food Processing and Horticulture Development Corporation Limited filed for ‘Banglar Rasogolla’ and not just ‘Rasogolla’ and that in its application for the registration of ‘Banglar Rasogolla’ under the column ‘specification’, it has stated that it is a “syrupy desert/ sweet popular in all over West Bengal as well as India and abroad” (see the document numbered 22 here) clarifies that this sweet is not limited to the state of West Bengal. Besides this, the formality check report (see the document numbered 20 here) given by the GI Registry asked the applicant to show the uniqueness of the ‘Banglar Rasogolla’ along with comparison or differences with other Rasogolla (prepared in other Places of India) but in the reply given to the formality check report, the applicant was not able to properly (see the document numbered 13 here) distinguish the uniqueness of the Banglar Rasogolla to other Rasogollas of other places.[i] This was also covered in an earlier post on the blog. In the same way when an application was filed before the Registry for cancellation of registration of Banglar Rasagolla (citing that the sweet originated in the Jaganath Temple in Puri, Odisha and if at all a GI registration is to be given to this sweet variety, it is the state of Odisha who is the true claimant), the applicant also mentioned that Rasagola differently spelled as Rasgulla, Rasogulla, Rasogolla, etc. and known as Rasbhari or Rasbari in Nepali is a syrupy dessert popular in the Indian subcontinent and regions with South Asian diaspora (see the document numbered 11 here). Should the GI Registry have altogether rejected both the applications on the aforementioned ground that this sweet variety has fallen in common use and is generic now?

Although the removal of GI status of ‘Banglar Rasogolla’ is still pending, in the event that both the states continue to have their GI registered, the success of these two GI registration will lie upon the fact if the registration is able to provide a platform for better protection of the GIs (the second part of the Preamble of the GI Act). Better protection here means the product fetching a premium price post registration thereby developing the socio-economic conditions of the people who are associated with the production of these goods (that is, the workers, producers, sellers, etc.). Ironically, in India, the entire pomp and show including the media coverage is before the GI registration and once registered, it falls into oblivion. So, the question that lies ahead is how the people associated with the production of ‘Banglar Rasogolla’ and ‘Odisha Rasagola’ be able to utilise the GI platform to fetch a premium price for their goods? Only if these GI registration helps them in fetching a premium price for their versions of Rasogolla/Rasagola, thereby, improving their socio-economic condition, it can be considered a true win.

[i] They did provide a distinction as a formality but it remains a mystery on what grounds they were accepted by the GI Registry. For instance, under the Organoleptic features analysis it was mentioned Banglar Rasogolla  has Spongy feature which makes the product unique among all whereas other rasogolla absolutely Lacks spongy Character. Smooth & delicate basic mouthfeel is the characteristics of Banglar Rasogolla whereas Other Rasogolla is found to have rough & chewy features. The question is the applicant did not mention from where this other rasogolla sample was collected. Personel experience of many people and the author reveals that rasogolla not originating in west Bengal too have spongy characteristic and the second characteristic that is smoot and delicate basic mouthfeel is too subjective a term which should not have been recognised by the GI Registry. Likewise, they mentioned no starch is used in Banglar Rasogolla but it is used in Rasogolla of other states. How did they come to this conclusion and basing on what datas is missing in the reply to the examination report.