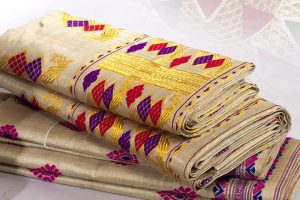 We’re pleased to bring to you a guest post by Jupi Gogoi. Jupi is an Assistant Professor at the Faculty of Law, University of Delhi. She was formerly associated with the Indian Law Institute, New Delhi.

The Need to Look Beyond Wines and Spirits: GI Law in India and the Woes of Muga Silk

Muga is a silk variety endemic to the state of Assam. Attires made of Muga Silk are reflection of the culture and heritage of the people of Assam. One of the most famous attire made out of this silk, Muga Mekhela Sador is mostly recognized outside the state of Assam as the dress worn by the Bihu dancers, but for the women of the state, owning a pair of Muga Mekhala Sador (Mekhela Sador is the traditional attire of Assamese women) is considered a matter of pride. Besides this, Muga Silk is now increasingly used for making other garments, furnishing materials and decorative items.

Muga and its Assamese Identity

The history of usage of Muga silk in the valleys of Assam goes centuries back. It has found mention in Kautilya’s Arthashastra and famous historian Edward A. Gait’s A History of Assam as one of the finest silk in the world. Recognizing the importance of the silk, it was registered as a Geographical Indication (GI) of Assam in 2006. The initiative for registration was taken by Assam Science Technology and Environment Council (ASTEC) with the help of a firm called Corporate Law Group based in New Delhi. Law of GI limits the usage of the indication/tag to the authorized users belonging to a specific territorial area. The Geographical Indications of Goods (Registration and Protection) Act, 1999 under section 21(1)(b) gives exclusive right to the ‘authorised user’ to use the geographical indication in relation to the goods in respect of which the geographical indication is registered. Use of the indication by anyone beyond authorised users is considered infringement under the law.

However, what has been observed recently in various textile exhibitions especially around Delhi NCR is that a silk called ‘Moonga’ is sold on a huge scale.[1] The sellers mention[2] that this silk is produced in Jharkhand, Chhattisgarh, UP and Bihar. Moreover, many websites[3] also advertise Moonga silk, some with the image of traditional Muga Silk embodying traditional Assamese designs and some with other textile images. Interestingly, most people are not aware of the characteristics of the Muga silk (the simple fact that the uniqueness of Muga Silk is its natural golden yellow colour) and hence have been buying ‘Moonga’[4] considering it to be synonymous with Muga. Inspite of Silk Board of India confirming that there is no silk variety called Moonga, the sellers have been selling Moonga silk without fear. It is important to note that such incidents are not only confined to Muga silk. Another textile item that faces such challenge is the Banarasi saree. It is reported that Banarasi saree weavers face tough competition from cheap silk fabric from China and in order to sustain in the market, cheaper material and synthetic fabric are used substituting silk in which traditionally the Banarasi saree is woven.

GI Registration Is Not an End in Itself

In India, currently, there seems to be a competition amongst states on who can have the highest number of GI registered products, completely ignoring the main purpose of the GI law, i.e, to fetch a premium price due to the GI tag eventually benefiting the producers and other stakeholders of the GI product. To view registration of a GI product as an end in itself is wrong and extremely shortsighted. There is a serious lack of strategy post registration. Advertisements, creating awareness about the specialty of the product and other brand building tactics are lacking. The GI proprietors do not have a plan after registration and commonly cite[5] lack of funds as an impeding factor.

There are also very limited instances of infringement suits filed by GI proprietors or authorised users in India. The two major hurdles cited are lack of awareness of GI law by the enforcement agencies and lack of ‘additional protection’ to products beyond wines and spirits. Article 23 of the TRIPS Agreement provides for Additional Protection for Geographical Indications for Wines and Spirits. The aforementioned provision states that “each Member shall provide the legal means for interested parties to prevent use of a geographical indication identifying wines for wines not originating in the place indicated by the geographical indication in question or identifying spirits for spirits not originating in the place indicated by the geographical indication in question, even where the true origin of the goods is indicated or the geographical indication is used in translation or accompanied by expressions such as “kind”, “type”, “style”, “imitation” or the like”. It means that that the additional protection of wines and spirits is absolute and unqualified, and, unlike right holders of other goods, the proprietor of GI relating to wines and spirits do not have to prove that incorrect use of the geographic origin is misleading as well.

In the instant case, textile does not fall under the category of ‘additional protection’ and in the event that an infringement case is filed in future, it will be difficult for the proprietors and registered users to prove the infringement. The burden of proof in absence of additional protection lies with the plaintiff (in this case the proprietors and users of Muga) that the usage of ‘Moonga’ is able to dilute the image of Muga and hence substantial losses are incurred by them. Moreover, the defendant party can easily bring the defence that the word ‘Moonga’ is sufficiently dissimilar and is not an act of unfair competition including passing off in respect of registered geographical indication.

This is just one of the numerous instances where GI law ‘seems’ to be failing to provide adequate protection to the GI registered products. Till the above concerns are taken care of, infringement of GI products will continue unabashed. Steps have to be taken immediately to deal with them. It is time that the GI authorities wake up and take concrete steps for effectuating the GI law, thereby, providing an opportunity of socio-economic benefit to the GI producers and other stakeholders. The proprietors and registered users have to be pro-active to deal with such infringements. In the case of the Muga, the GI proprietors, the registered users as well as the government of Assam should take steps so that Muga and its identity with ‘Assam’ and its people remain intact.

[1] The visit to the exhibitions were a part of the author’s doctoral research. Also see, https://www.meraevents.com/event/Weaves-of-India-Delhi wherein an event called Weaves of India was advertised to be held from 11th April, 2019 to 16th April, 2019. The write-up of the advertisement stated, “The Bhagalpuri stall has saris made of Tussar, Kosa and Moonga silk.”

[3] There are many websites such as (i) https://www.utsavfashion.in/saree/muga (ii) https://www.utsavpedia.com/textiles/muga-silk-the-golden-silk/ (which uses the word Muga and shows pictures of other sarees); (ii) https://www.luxurionworld.com/products/saree/fabric-sarees/moonga-silk (luxurion interestingly sells Moonga from Assam, Bhagalpur as well as Banaras); (iii) https://www.exportersindia.com/m-r-handloom-fabrics/moonga-silk-fabric-1322041.htm provides pictures of Muga silk and traditional Assamese designs and markets it as Moonga silk fabric based in Bhagalpur, Bihar; (iv) https://www.holyweaves.com/collections/fabric-muga-silk/fabrics shows Muga having olive green, beige and rosy brown colour (Muga is a silk which is naturally golden yellow).  There are many other such websites who are fraudulently using the GI tag of Muga and selling other products. There are others who are using the word ‘Moonga’ but shows Muga fabric. There are many who are trying to create a new silk called Moonga from different states including Assam whereas such a silk does not exist. There are others such as https://www.tradeindia.com/fp5384828/Handloom-Moonga-Silk-Sarees.html who are trying to state that Moonga and Muga is same (It states, “We are locally popular manufacturer of Handloom Moonga Silk Sarees in Bhagalpur, Bihar, India. Muga silk is a variety of wild silk geographically tagged to the state of Assam in India.”) It is basically an act of passing off in respect of registered GI.

[4] The abovementioned sources in footnote 3 also indicates that sellers are trying to dilute the distinctiveness of Muga and Moonga is portrayed as synonymous to Muga. Moreover, the author during her doctoral research enquired if people knew about a silk variety called Moonga. The people who said they knew about a silk called Moonga were not able to differentiate between the two and said that Muga and Moonga are most probably the same.  Many even tried to authenticate Moonga by sending links such as: https://www.thehindu.com/features/metroplus/fashion/drape-a-piece-of-pride/article4481756.ece which actually had images of Muga.