We’re pleased to bring to you a post by Niharika Salar. Niharika is an Assistant Professor at the NALSAR University of Law, Hyderabad.

Is it Kurta? Is it a Kaftaan? It’s GUCCI: Why GUCCI May Not be Accountable This Time Too 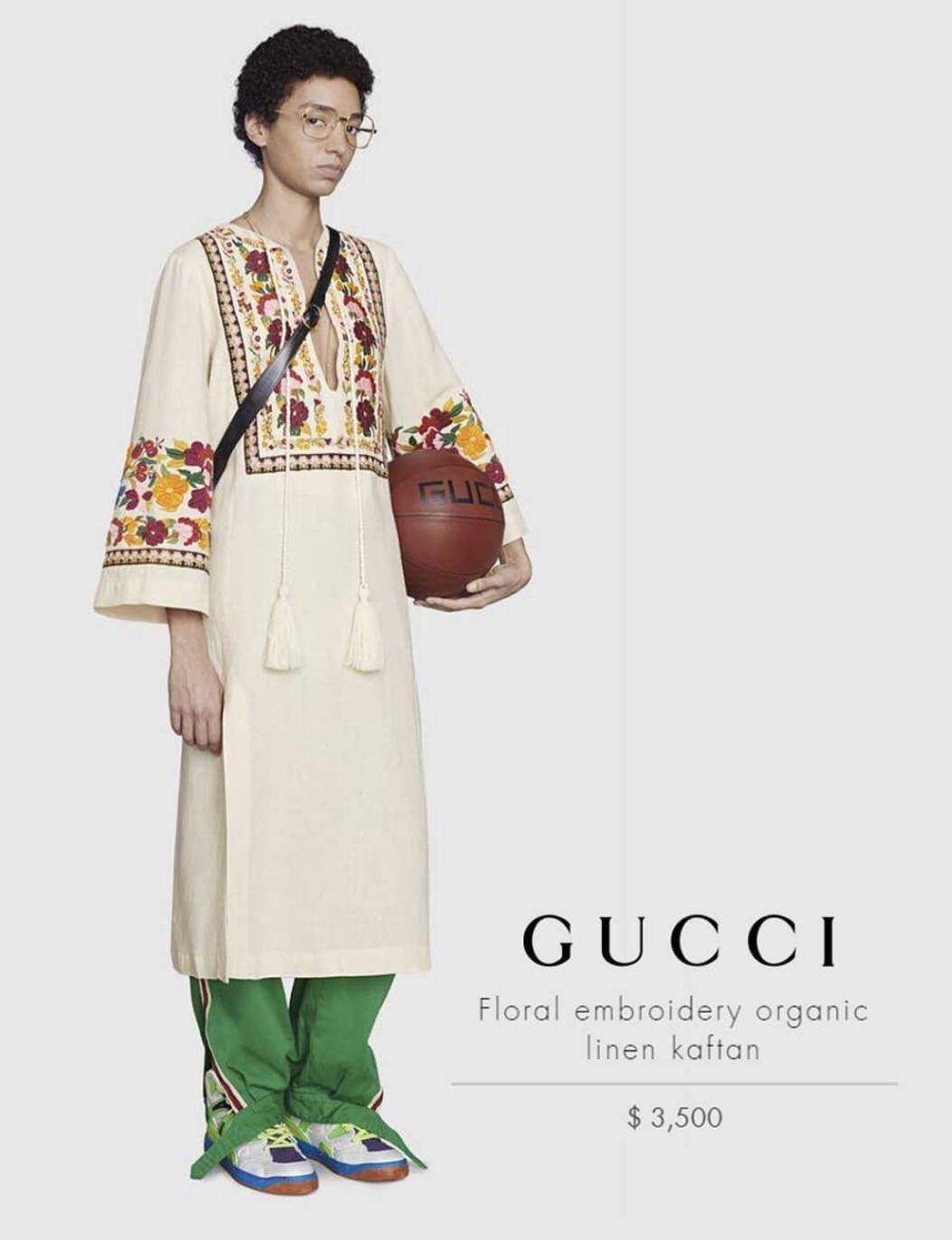 A few months ago, Gucci was found selling a peculiar outfit named “organic linen kaftan”. Following this incident, news of Zara selling lungi as ‘check mini skirt’ a few years ago had resurfaced on social media. This isn’t the first time Gucci and other fashion houses have been involved in such an act, but an interesting question remains: what are the available legal remedies and attached limitations?

Defined as “the act of taking or using things from a culture that is not your own, especially without showing that you understand or respect this culture”, cultural appropriation is a growing phenomenon through mediums including but not restricted to apparel clothing. Blogs on similar themes in music and apparel have been written earlier arguing for reformation in the legal system to hold such acts accountable, especially from a Traditional Cultural Expressions or TCEs perspective. However, it is important to revisit these themes from a holistic social approach to bring justice to legal analysis.

Anything which may bear cultural significance to a community is no longer restricted to the respective community itself. More people are willing to exploit such attached meanings and intellectual property law is trying to keep up with such conflicts, but with boundaries getting blurry with each step. Typically, it is the dissociation of the garments from their traditional roots that lead people to label cases as those of cultural appropriation. A previous post on SpicyIP has covered the issue in detail.

Many have suggested that cultural borrowing turns into cultural appropriation when the items are utilised without consent or without informing those whose culture is being appropriated, or that it is when originators of the cultural expressions do not get credit or remuneration for their creations. Similarly, others have argued that context, particularly as it relates to power relationships, is a key factor in distinguishing borrowing from exploitative cultural appropriation.

Kurta or Kaftan alike garment? Does it matter?

The Indian subcontinent gave birth to the popular traditional attire – the Kurta. The dress is commonly worn in countries such as Nepal, Pakistan, Afghanistan, and Sri Lanka along with India. Considered a part of ethnic wear, Kurtas have different varieties depending on their design and fabric. No community or individual per se have any protection over the kurta. However, certain types of embroidered kurtas, such as Kasuti kurta from Karnataka (India) and Chikankari kurta from Lucknow, are GI protected due to the embroidery. But even here, it’s only the embroidery which is protected and not the silhouette of the Kurta per se.

The Kaftan, on the other hand, was initially worn as a robe or a tunic and can be traced back to Morocco in the 16th century, although the Kaftan has been worn across the Middle East and Persia long before this time.  To the western world, Kaftan-like dresses were introduced by designers such as Paul Poiret and Mario Fortuny in the early 20th century. In the 1950s/1960s, this style was adapted by French couturiers such as Christian Dior and Balenciaga and appeared in the world of high fashion. By 1966, Vogue had described the kaftan as an essential garment for every member of the jet-set crowd. From the mid-1970s, the kaftan shifted from the runway to being associated with resort wear. Tom Ford also reanimated and shortened it to a micro-mini length for the Gucci Spring 1996.

A mention of Kaftans can be found under the Indian Geographical Indications Journal no.37 and Journal no. 19 where applications for protection of a certain work can be found and the apparels include a Kaftan. Yet, this may not be enough to ascertain any claims over the concept of a Kaftan itself. Mention in the Journal No. 37 is with respect to traditional Bagru Hand Block Print of Rajasthan, which is to be applied to Kaftans, and the one in Journal No. 19 is with respect to Nakshi Kantha, traditional embroidery art from Bengal. What these mentions protect with respect to Kaftans are the prints which are applied to it. If Gucci were to apply any of these prints to a kaftan, then they may be held liable, but without that, they cannot be held accountable.

Here, the discussion of some previous instances of cultural appropriation is relevant. Navajo (a Native American tribe) reached a settlement with Urban Outfitters after the tribe’s name was illegally used for a collection that included “Navajo hipster panties” and a “Navajo print flask”. The tribe registered the name Navajo as a trademark in 1943 which helped their stance in the litigation. Last year in November, French fashion designer Isabel Marant had to apologise after the Mexican government accused her of appropriating traditional indigenous patterns in one of her garments during a display.

The last few decades have seen an increase in the activities around seeking international protection for traditional cultural expressions. In 2007, the United Nations General Assembly adopted the United Nations Declaration on the Rights of Indigenous Peoples (UNDRIP), which seeks to provide protection against any discrimination and contemplates the intellectual property rights protection to indigenous people. Further, the World Intellectual Property Organization (WIPO) has also created an Intergovernmental Committee on Intellectual Property and Genetic Resources, Traditional Knowledge and Folklore (IGC), in order to contemplate upon an international legal instrument or instruments for the protection of TCEs. Despite attempts like a push for a sui generis protection (covered in a previous blog) there has not been a concrete solution to the situation of cultural appropriation.

The other side of the coin?

It is clear from the literature referenced above that appropriation occurs when a member of a dominant culture in a position of power or art is able to take aspects of a marginalized culture, rakes away them from their original meaning, and use them for entertainment value without considering their original context or having to deal with the negative consequences that someone from that culture would face as a result of that same action. Usually, replicating designs without taking into account their cultural importance always comes with a potential risk of dilution of a community’s identity.

However, in the interest of a more holistic approach, it is only fair to also consider the other side of the argument. Most times, huge fashion house brands consider themselves worthy of credit for reinventing an otherwise “lost” piece of culture. It is difficult to ignore the predominant role played by global brands in refocusing the spotlight towards such expressions. Kaftan is an example in itself of how it was reintroduced and made popular in the western world by playing around with the idea of the silhouette. Authentic Kaftans were rarely worn in parts where the dress was unknown. It was not until the 1950s and early 1960s that this style of dress began appearing in high fashion when it was adapted by French couturiers—including Christian Dior and Balenciaga—as a new form of loose-fitting evening gown or a robe over matching trousers. Earlier known only to some parts of the Middle East as traditional attire, now Kaftan started emerging into a global outfit, associating itself with comfort and high fashion.

Designers have also contended that such reproduction is nothing but an act of good will with an intention of “promoting a craft and paying tribute to the aesthetic to which it is linked”.  While it is important that communities are granted rights to control the use of their cultural expression, there is also a need to strike a delicate balance with the necessity of preserving the dynamic nature of culture which seeks inter-culturality, artistic freedom and freedom of expression.

One may, however, argue that the cost of such reintroduction may not be proportionate to the potential monetary loss and theft of cultural identity borne by the concerned communities. One way out is definitely having a legally binding contractual understanding between such communities and fashion houses. The Cultural intellectual property rights (CIPR), proposes the 3 C’s Rule, i.e., Consent, Credit and Compensation. Based on the recognition of cultural intellectual property rights for artisans, as guardians of traditional cultural expressions, CIPR believes in a more benefit sharing business model providing legal protection against misappropriation. The concepts of 3C’s are universal and can be used in every jurisdiction, providing a momentary solution to the lack of universally recognised framework for protection of traditional cultural expressions. However, much too often many of these communities are not aware of such rights. In such a case scenario, it is really difficult to say whether Gucci is answerable to anyone for the “Organic Linen Kaftan”.