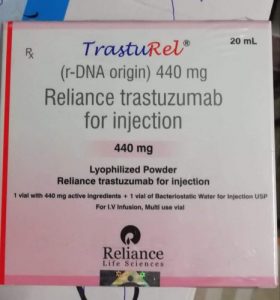 An appeals bench of the Delhi High Court finally heard and disposed, last month, an appeal filed by Reliance Life Sciences in 2016, against an order that Justice Manmohan Singh had delivered in a lawsuit filed by Genentech. Since this is a strange case, it is necessary to recap the origins of this lawsuit.

Around 2013, Biocon, Mylan and Glenmark were circling around Genentech’s patents and pending patent applications over the biologic Trastuzumab, that is sold under the brand name Herceptin®. The drug which is primarily used for treating a particular type of breast cancer, HER2+, has earned a reputation of being a wonder drug in medical circles. The drug earns Genentech and its parent company Hoffman La Roche, an estimated US $ 7 billion a year – yes, you read that right – those figures are per year. In its last Form 27 filing for the Indian patent no. 205534 covering this drug, Genentech revealed that it had earned Rs. 130 crores in a year from the Indian market.

In 2013, as we first reported, Genentech had failed to pay the Patent Office a renewal fee of Rs. 12,000 for its patent no. 205534 by the annual deadline, leading to the lapse of the patent which otherwise would have expired only in 2019. Although the Patent Office, in a statement to us, had indicated to us that they would be willing to consider an application for restoring the patent, Genentech announced that it would not be seeking restoration of the lapsed patent. The next year, when Biocon and Mylan were preparing to launch their biosimilar of Herceptin, they were sued by Genentech and Roche before the Delhi High Court in a rather baffling lawsuit. The biotech giant could not sue for patent infringement since it owned no valid patents. Instead the company tried suing for some twisted version of the tort of “passing off”. Basically, it was argued that the biosimilar made by Biocon and Mylan, were not equivalent as the original product manufactured by Genentech, that these products did not comply with Guidelines for Biosimilars and hence could not claim to be as efficacious as the drug sold under the Herceptin brand. Thus, the prayer by Genentech and Roche was that all such references be deleted from the product inserts of these biosimilars and that these companies be restrained from marketing their products as equivalent to Herceptin. This would have basically made it very difficult for these biosimilars to be marketed because doctors would likely not prescribe biosimilars unless they performed in the same manner as the originator product.

As we explained earlier on this blog, the regulatory pathway for biosimilars is different from the pathway for small molecule drugs and a company launching a biosimilar has to conduct its own full-fledged clinical trials – it cannot depend on mere bioequivalence data. This makes the regulatory approval process for biosimilars far more complicated and Genentech’s lawsuit created a stir about the quality of the biosimilar manufactured by Biocon and Mylan. However, since the DCGI had signed off on the launch of the biosimilar by Biocon and Mylan and approved the packaging, it was simply not possible for Genentech to argue that the Biocon and Mylan were riding of its goodwill in a manner that was detrimental to it. In addition, there were a host of other legal issues such as whether the DCGI could even be sued in a civil lawsuit (as opposed to a writ petition) because the Drugs & Cosmetics Act provides the DCGI with certain immunity for its regulatory decisions.

Luckily for Genentech, the matter landed up before Justice Manmohan Singh, who delivered a most atrocious judgment running into 227 pages and which went against Biocon and Mylan on several issues. For an earlier post of ours, on the judgment, please click here. If I ever go back to teaching in law school, I intend to use his judgment as a prime example of what students should avoid in the course of legal writing. After a round of messy appeals, Biocon and Mylan managed to get Justice Manmohan Singh’s order set-aside. We covered that over here.

Reliance Life Sciences which got sucked into similar litigation in 2015, as it too was launching a biosimilar, was not so lucky in one aspect. Justice Manmohan Singh had compelled the company to market its drug under the name ‘Reliance Trastuzumab’ or ‘TrastuRel’ rather than just Trastuzumab which is the International Non-Proprietary Name (INN) for the drug. Apart from this condition going against the labelling requirement of Rule 96 of the Drugs & Cosmetics Rules, 1945 it was also causing trouble for Reliance Life Sciences when it was bidding for government tenders. These tenders apparently required all applicants to list the generic name or INN without indicating any proprietary elements. Since Biocon and Mylan had got a similar condition vacated by the appeals bench in 2016, Reliance Life Sciences wanted similar relief from the court.

The appeals bench led by Justice Vipin Sanghi granted Reliance Life Sciences the prayer that it sought, noting in pertinent part, that the conditions imposed by Justice Manmohan Singh were prima facie in contravention of Rule 96. The second line of reasoning was that Reliance Life Sciences could not be denied the same relief that was granted to Biocon and Mylan, especially when their drug was approved by the DCGI. The judgment however records several damaging statements made by Genentech’s counsel in court, against the manner in which Reliance Life Sciences conducted its clinical trials to get approval of its biosimilar. After having read some of the allegations made by Genentech, any doctor will think twice about recommending Reliance’s product, especially since the judgment does little to provide the counter to these allegations. I suspect, this is the true intent behind Genentech’s litigation – to cause doubt about how Indian companies carry out their clinical trials for biosimilars. I am afraid, this strategy is going to work, if judges are going to record all the allegations without providing the counter or without testing the evidence through a rigorous cross-examination. As a thumb rule, I do not think judges should record any of these allegations in their judgment unless they have examined the underlying evidence.

“The submission of the appellant that the suit is actuated by malice –with the object of stifling competition, needs serious consideration. There is no purpose to be achieved in creating unnecessary and meaningless obstacles in the conduct of its business by the appellant. Even according to the respondent/ plaintiff, the appellant is manufacturing and marketing its biosimilar drug for over three years. Thus, we find the objection of the respondent/ plaintiff to grant of similar interim relief to the appellant, as is operating in the appeals of Biocon and Mylan, to be completely unjustified.”

This is a significant observation by the appeals bench because the Competition Commission of India, in 2017, acting on a complaint by Biocon had refused to initiate an investigation on whether Roche and Genentech were indulging in vexatious litigation. We covered that order in a series of posts over here. The CCI had agreed to investigate both companies on other related issues related to their dominance vis-à-vis Herceptin. It would be interesting to see if Reliance Life Sciences could use the High Court’s observations to reopen the question of whether Genentech and Roche indulged in vexatious litigation against their competitors as a tactic to delay the launch of lower priced products.