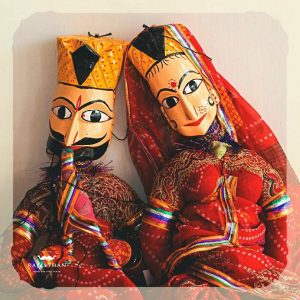 We’re pleased to bring to you an interesting guest post by Dr. Sunanda Bharti on IP protection of kathputlis and other puppets. Sunanda is an Assistant Professor in Law at Delhi University. She has written several guest posts for us in the past as well, which can be viewed here, here, here and here.

Bol Ree Kathputli [Tell Me O Kathputli], What IP Rights Do I Have in You?

The art of making kathputli was given life by the Bhaat community of Rajasthan as a form of entertainment ages ago. The word ‘kathputli’ is a combination of two words ‘kaath’ meaning wood and ‘putli’ meaning a doll. The inner body frame of the puppet is made from wood and then it is given adornments in the form of metal jewellery, clothes and some metal work. Often however, the word ‘kathputli’ is used, and incorrectly so, for any kind of puppet. This piece maps the intellectual property rights framework for both puppets of the ordinary variety and kathputlis in particular. First, let’s understand where the traditional kathputlis are placed in the panorama of IP rights.

Kathputli as Traditional Knowledge and Its Protection as GI

Kathputli, as the unique art of Indian puppetry would fall under what we now refer to as ‘traditional knowledge’ or TK. Due to the various shortcomings of protecting TK as such (for example lack of documentation, lores and processes being oral, unidentifiable creator etc), kathputlis have been protected by India under its GI regime in the class of ‘handicrafts’. The protection is available till 2026, after which its continued protection would be subject to the payment of a registration fee. The certificate declares the Development Commissioner (Handicrafts), Ministry of Textiles, Government of India, New Delhi to be the registered proprietor.

The truth that emerges does not present a promising picture if the socio-economic status of the community involved with kathputlis is taken as an indication. The registration details of the GI certificate for kathputlis reveal 6 odd authorised users, mostly based in the Makrana and Dedwana districts of Rajasthan. All are in penury. Bhaat, the community mentioned above, for instance, comes under the Dalit domain and is grappling with the change of taste amongst contemporary patrons of art and also the rebellion within the community youth who want a more economically viable profession with a regular income. Clearly, an art which has lost its patrons is a dying one and it is unlikely that the stakeholders involved would be aware of their intellectual property rights.

Kathputlis, being registered as a GI, of course, get legal protection but what about ordinary puppets? After having briefly looked at the status of kathputlis under the GI regime, it is useful to examine the copyright protection of puppets in general, which would operate concomitantly with the GI protection of kathputlis. Two statutes that may be of some relevance here are the Copyright Act, 1957 and the Designs Act, 2000.

Are Puppets Protected under the Copyright Act?

Are puppets protectable as artistic work under the copyright law? What rights does one have in a purchased puppet? What if the puppet is mass produced, ‘more than 50 times’?

Firstly, copyright would subsist in puppets if they meet the criterion of being a work with a ‘modicum of creativity’. But, if the puppets are commonplace and of ‘run-off-the-mill’ variety, they may not qualify to be original.

Copyright however, does not protect purely utilitarian aspects of a work. So, a crucial question is that  would a puppet which is nothing more than a toy, often hand-made, meant to be played with hands, strings, rods and other such props, not classify as a utilitarian object; hence not amenable to copyright protection?

We do not have any Indian case law that throws light on copyrightability of toys. Thankfully however, we do have a plethora of US cases which have held in favour of their copyrightability. In Gay Toys Inc. v. Buddy L. Corp., 703 F.2d (6th Cir. 1983), the court declared that the toy plane was not a ‘useful article’ possessing utilitarian and functional characteristics. It held that toys do not have any intrinsic function other than the portrayal of the real item and are protectable by copyright. The recent (July 2019) case of LEGO A/S v. Best-Lock Construction Toys Inc., D. Conn., No. 3:11-cv-01586-CSH, 7/25/19 also reiterates the same stand. Mini-figures of LEGO usually have movable torso and hands. This was alleged to be a functional element by Best-Lock. Rejecting this claim, the US district court declared that LEGO torso shapes were a creative element and nothing more.

It can, hence, safely be said that puppets, being toys, cannot be considered as utilitarian and their creative element can definitely be considered as artistic work meriting copyright, if found to be original.

Coming to the second question—what if the concerned copyrighted puppet is mass produced, more than 50 times? Here, section 15(2) of the Copyright Act, 1957 creates a distinct linkage with the Designs Act, 2000 to provide a clear answer. It states that “copyright in any design, which is capable of being registered under the Designs Act, 2000 but which has not been so registered, shall cease as soon as any article to which the design has been applied has been reproduced more than fifty times by an industrial process by the owner of the copyright or, with his licence, by any other person.”

Transposing the above understanding to the situation of puppets, if the outer appearance of the puppets is replicated more than 50 times, the copyright which might have subsisted in the puppets’ artistic work would cease. This would leave them unprotected under both copyright law and design law.

Would the use of a puppet for a public performance be an infringement of the artist’s copyright?

For example, if I purchase a few puppets from a maker ‘M’ and do a show (for money) with them, weaving a storyline of my own, would I be violating any copyright of the maker?

The doctrine of first sale entitles a purchaser of a copy of a copyrighted work to use or dispose of that copy freely without paying a royalty to the copyright holder. However, although the purchaser of the concerned puppet may freely dispose it by using or reselling it, they are still bound by the other exclusive rights granted to the author under the Copyright Act, including the right to communicate the work to the public under section 14(c)(ii); and to make any adaptation of the work under section 14(c)(v).

Firstly, the author of an artistic work has the right to communicate the work to the public. Communication to the public, as per section 2(ff) of the Copyright Act can be—a) directly; b) through a display; and c) through diffusion whether simultaneously or otherwise. Therefore, merely purchasing a copy of the work will not entitle the purchaser to publicly ‘communicate’ the art work (subject to any fair use rights under section 52 of the Act).

Secondly, the author also has the right of adaptation, which, in the case of an artistic work means:

1) ‘conversion of the work into a dramatic work by way of performance in public or otherwise’ under section 2(a)(ii)–this, in the submission of the author, would cover within its realm, any monetised puppet show that one does with the puppets so purchased, provided the scenic arrangement or acting form of it is fixed by me in writing or otherwise.

CAUTION: The above explanation is skeptically offered by the author, considering the unfortunate absence of any case law or comparative jurisprudence on the matter. Comments are welcome.

2) ‘rearrangement or alteration’ of any work. This also possibly forecloses any modification of the puppet in order to convert it into a dramatic work.

Additionally, if such modification is proved to be ‘prejudicial to the honour or reputation’ of the maker, the latter has a special right to claim damages u/s 57 (moral rights).

In relation to point 1 above, the author’s submission (in the hope of convincing the readers) is that while adaptation of literary works into dramatic works by way of performance in public or otherwise [as stated in s 2(a)(ii)] is easy to understand if we look at a novel being adapted into a play/nukkad natak etc; however, by contrast, the examples of artistic works being adapted through conversion into dramatic works by way of performance in public, are not easy to fathom. Nonetheless, they do exist—for example the Odissi and Bharatnatyam dance forms (dramatic works) owe a lot to the dance sculptures (artistic works) found in various Hindu temples.

In fact, Dr. Kanak Rele, Director, Nalanda Dance Research Center and a recipient of Padmabhushan Award, Fellow of Sangeet Natak Akademi maintains that “Odissi is characterised by simplicity of grace and redolent with sculpturesque poses which are reminiscent of the glorious stone sculptures of Konark and other temples”.

MF Hussain’s Gaja Gamini, the cinematograph film had an 80 feet long visual script which was in fact a sequence of paintings or artistic work by Hussain interspersed later with written words/lines here and there. The script of Gaja Gamini may serve as an apt example of adaptation of an artistic work into a dramatic work.

Likewise, kathputlis being used to give a stage performance is another example befitting the league (in the submission of the author).

Also, any alteration of the traditional kathputli puppet is also likely to invite an infringement action, albeit under Geographical Indications of Goods (Registration and Protection) Act, 1999 (GIGA). Considering that kathputlis are registered as a GI, section 22(4) of GIGA would come into play to hold any ‘impairment of goods after being put in the market’ as infringement.

Simply put, it seems that whether it’s a purchase of the traditional kathputli (as protected under GI) or a simple puppet which is a copyrightable subject matter as an artistic work – the rights that the purchaser has in them are quite limited, some even dubious.

Whether the owner of rights in those puppets would be eager to vindicate them or even have the means to achieve that, is a different matter altogether. For instance, coming back to the Bhaat community to which kathputli making is now confined, it is safe to assume that given their socio-economic status, illiteracy and lack of zeal to establish their rights, it is unlikely that any such infringement as above would ever come to light.

Indeed, the current tendency might just be to tolerate many types of infringement. Also, one must not forget that adaptation is an enabling right and not a stifling one. So any stringent reading of the rights may not find favour even legally.

The endeavour of this post was just to highlight how the world of IP interacts with puppets – both the kathputlis as well as the ‘ordinary’ ones. On a positive note, it is hoped that the Entrepreneurship Development Institute of India (EDII) which has been set up to develop entrepreneurial competencies in weavers, artisans and traders to promote hand-made art, would cover within its fold the almost lost art of kathputli making. This would not only give some respite to the Bhaat community but also give the necessary impetus and encouragement to other artisans/makers of puppets to enable them to establish their rights.