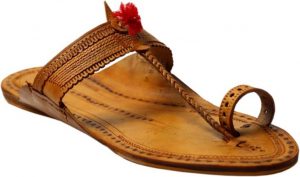 We’re pleased to bring to you a guest post by Dr. Sunanda Bharti on the GI tag for Kolhapuri chappals. Dr. Sunanda is an Assistant Professor in Law at Delhi University. She has written two guest posts for us in the past as well, which can be viewed here, here and here.

Though GI in favour of Kolhapuri was registered in December 2018 itself, the news caught the fancy of the media only recently. After 10 years of wait, the battle for legal recognition has been won by this handicraft.

Before I begin to deal with whether it is a victory yet/at all, it would be apt to highlight a strange anomaly in the records of the GI Registry regarding Kolhapuri chappals.

As per the GI registry website, the organisation that applied for the registration is Central Leather Research Institute, CSIR, New Delhi; whereas the Journal of Geographical Indications reveals the applicant/s name to be different and CSIR to be just a facilitator. Snapshots of the two concerned document portions are pasted below: 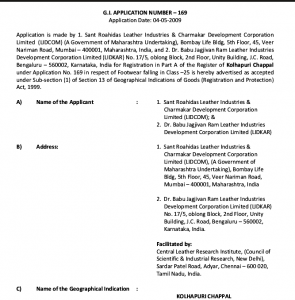 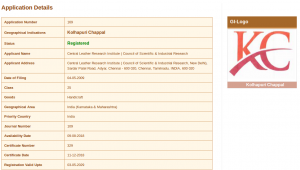 Whether it is a goof-up or actually a norm, only the Registry can tell. Meanwhile, the common understanding is that a joint bid for GI tag was made by the Sant Rohidas Leather Industries & Charmakar Development Corporation Limited of Maharashtra (LIDCOM) and the Dr Babu Jagjeevan Ram Leather Industries Development Corporation of Karnataka (LIDKAR) in 2009, which fructified in 2018 into GI tag being granted in favour of the artisans of the two states.

Let me focus on the main relevance of the post–what results from this recognition which is being hailed as a victory for the artisans involved?

The GI tag, it is believed, would open up the world market (as against local or domestic) to the craftspersons registered as authorised users in the 8 districts-4 each of Maharashtra and Karnataka. Read negatively and exclusively, it forbids the producers of footwear in any other part of the country from using the term Kolhapuris to sell their ware.

To elaborate, for these chappals to receive Kolhapuri name, they must be produced by artisans of Kolhapur, Solapur, Sangli and Satara districts of Maharashtra and Dharwad, Belgaum, Bagalkot and Bijapur districts of Karnataka and –‘one of the activities of either the production or of processing or preparation must take place in such territory’ [per section 2(e) of GIGA, 1999]. Each step in production to the final packaging would be monitored by the registered proprietor/s (LIDCOM and LIDKAR) and only they would be legally entitled to brand the finished chappals with the seal of ‘KC’, qualifying them as authentic Kolhapuris.

For those who would want to savour details, Kolhapuri for chappals is an ‘appellation of origin’ GI because if reveals the name of the place to which the good (that is chappals), its source, quality and reputation belongs. Though the expression ‘appellation of origin’ is not used by the Indian law, the international understanding of GI essentially bifurcates into 1) indications of source and 2) appellation of origin. The basic difference between the two being that the latter need not use the name of any geographical place in it. It might just be an ‘indication’, a clue or a hint to a certain region. For example Pashmina, Basmati, Alphonso—they are not geographical places but still are GIs. The Geographical Indication of Goods Act, 1999 (GIGA 1999) under section 2(e), while giving the definition of GI states in its explanation that: ‘For the purposes of this clause, any name which is not the name of a country, region or locality of that country shall also be considered as the geographical indication if it relates to a specific geographical area and is used upon or in relation to particular goods originating from that country, region or locality, as the case may be…’

So, only the artisans of the 8 districts get to rake in the moolah from Kolhapuris. But, where is the money?

Handicap for Hands that Make Kolhapuris

There are three difficulties here, not often highlighted–

1) The demand for Kolhapuris might have increased, the supply of leather—which is the basic raw material, has reduced. Historically, when only cattle were used to plough the fields, the dead ones were used by chappal manufacturers. Advent of field mechanisation replaced cattle with tractors and other machinery resulting in a drop in the supply of raw hides. It is important to clarify here that Kolhapuri chappals are ‘all-leather’, essentially hand-crafted items – with even their stitching and other ornamentations being typically in leather.

Additionally, Maharashtra banned slaughter of animals belonging to the cow progeny (bulls, bullocks, ox and oxen for meat) 4 years ago in March 2015 through an Amendment to the Maharashtra Animal Preservation Act, 1976. It clearly had a never contemplated, unintentional effect on the Kolhapuri chappal industry. It may be taken as a classic example of conflict of interests within the State—on one hand it should promote Kolhapuris (and now more so, given the GI tag) in the domestic and international market and on the other hand it is duty bound/politically inclined to enforce the cattle slaughter ban.

It may be relevant to add that sourcing the raw material from the friendly neighborhood Karnataka is possible but only after adding/tackling the prohibitive material and transportation costs.

2) The second related problem has been of change of taste amongst the youth in India and across the globe. PETA (People for Ethical Treatment of Animals) says ‘Animals are not ours to experiment on, eat, wear, use for entertainment, or abuse in any other way.’ So, the general trend has been to move away from leather because of anti cruelty concerns or availability of other more economical, fashionable, branded and sufficiently durable alternatives in footwear.

3) Rise in competition, both legal and illegal (involving fakes/knockoffs) has always been a bane for Kolhapuri chappals and it has only increased with globalization and technology. The almost proverbial threat of ‘Chinese imitation’ always looms large. The tanners and cobblers involved in the Kolhapuri chappal industry might just be ill-equipped to handle the dangers involved.

What Should be Done to Make GI Protection of Kolhapuri Meaningful ?

The above enumeration supports the fact that a mere declaration of a certain good as a GI product is insufficient per se to successfully protect the traditional knowledge it embues. Once legal rights over a GI are obtained, they have to be defended and enforced.

This entails many things—primarily, it involves assuring the artisans raw material at affordable rates. The concerned two state governments should take it upon themselves to ensure this, for after all, a GI product is national property/heritage. It acts as a brand ambassador for a nation, projecting its culture and tradition in the wake. Given this, it only makes sense that the Kolhapuri chappal industry gets State support.

Secondly, the protection mandates a continuous monitoring of the markets to determine whether counterfeit goods (Kolhapuris) are being passed off. It is suggested that a specialised watchdog agency may be set up jointly by the state governments of Maharashtra and Karnataka to achieve the above task and also to help the artisans involved enforce their GI in domestic as well as foreign jurisdictions.

The author submits that unless the above is achieved, it is futile to remain stoned by the euphoria of just fetching a GI tag for Kolhapuris. They merit and deserve much more.