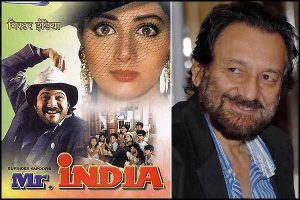 We’re pleased to bring to you a post by our Fellowship applicant, Lokesh Vyas, on the rights of film directors (or rather the absence of them) under Indian copyright law. Lokesh is a 4th year student at Institute of Law, Nirma University, Ahmedabad. This is his first submission for the Fellowship.

The Copyright Act, 1957 recognizes three stakeholders in a movie namely; producers, authors of underlying works (such as the script writer) and performers (such as the actors). It doesn’t recognise the contribution of directors and confer any rights upon them. A recent controversy over the proposed trilogy based on the iconic film Mr. India has revived the debate over directors’ rights in India. Shekhar Kapoor, the director of the film, who was not consulted on the same, has questioned if the directors have no creative rights over their films. He wishes to fight for the director’s rights, in the same way Javed Akhtar fought for the rights of writers. When asked if the producer of the film, Boney Kapoor has given away the rights of Mr India to the Zee group, he commented: “It’s not his to give away. Boney has the rights of Mr India, not its sequel or any other spinoffs”.

The issue of directors’ rights is not a novel one in India and was raised before when the Copyright Amendment Bill 2010 had proposed to make the principal director a joint author and copyright owner of a cinematographic film along with the producer.

Under Section 2(d)(v) of the Copyright Act, 1957 (‘Act’), a producer is the sole author of a cinematographic film. The director of the film is not considered as its author (or the joint author). Accordingly, being the sole author, the producer is also the sole (first) owner of copyright in the film under Section 17 of the Act. The director does not own copyright in the film. The rationale for the same can be gathered from Section 2(uu) which defines a ‘producer’ as a person who takes the “initiative and responsibility for making a work”. This provision counts on the decision making powers of a producer with respect to a movie, however, it fails to appreciate the intellectual contribution that a director makes in creating a movie, as explicated later in the post.

Further, Section 13(4) of the Act that protects the separate copyright in any work included in a cinematographic film is also of no help to a director because, unlike the work of a story writer, script writer etc., director’s work is not acknowledged as an independent copyrightable work under the Act. It does not fall within the scope of any of the other works (literary, dramatic, musical, artistic or sound recording) in which copyright subsists under the Act. Accordingly, a director does not hold any copyright under Section 17 which defines the author of a ‘work’ as the first owner of copyright.

Absence of even moral rights protection for directors

Furthermore, directors are not entitled to even moral rights (right to paternity and right of integrity) under the Act. Only performers (Section 38B) and authors (Section 57) have moral rights under the Act. Non-recognition of a director as an author of a film or the author of any other independent copyrightable work disentitles them the special/moral rights that authors are entitled to. Thus, even if the argument against need for economic rights for directors (based on that they are paid huge amounts of money under the contract with the producer) is accepted, the need for moral rights still stands. The director does not have the legal right to even be acknowledged as the director of a film or object to its distortion, mutilation or modification (for instance, in a remake or colourisation) if it is prejudicial to his honour or reputation.

Thus, the Indian Copyright Act not only fails to grant a director any joint rights in respect of a cinematographic film. It also fails to grant them any separate rights in his own contribution to the film, thereby leaving his interests entirely at the mercy of the contract between them and the producer. Interestingly, some countries such as Australia, UK and EU have acknowledged and duly protected the principal director’s contribution to a film under their copyright law.

Need for protection of directors’ rights

A director is the main creative force behind a movie. He exerts his intellectual labour and skill to visualise the script and directs all the crucial artistic and dramatic features of the film. He gives a visual expression to a script and converts it into a film. Therefore, it is the responsibility of the copyright law to protect the fruits of the director’s labour, skill and judgment.

The debate over the authorship of directors has its roots in Auteur theory, a theory of filmmaking which originated in France in 1940s. The theory considers a director as the primary creative force behind a movie and thus, its author. It highlights the importance of the director’s skills in the finality of the work and underscores the impact of director on the movie.

However, since this theory endorsed an eclectic approach to cinematic authorship and promoted the idea of singular authorship, it has been disregarded by many cinematic scholars and critics.

Interestingly, in 16 Casa Duse LLC v. Alex Merkin et al (2015), the US Court of Appeals for the Second Circuit adjudicated an issue involving a copyright claims by a director. The Court rejected the director’s claim of copyright in his contribution to the film, holding that “a director’s contribution to an integrated ‘work of authorship’ such as a film is not itself a ‘work of authorship’ subject to its own copyright protection”. Further, it also rejected his claim of copyright ownership over the film. Unlike in Indian law, there’s no provision in the US copyright law that defines an author in case of a cinematographic film/motion picture as the producer. Therefore, since both the parties claimed copyright in the film but also agreed that they were not the joint authors, it delved into the dominant‐author inquiry in order to determine the claim. It looked into three factors – who exercised more decision making authority, the way in which the parties billed or credited themselves, and who executed the relevant agreements with third parties – and came to conclusion that in this case, the producer was the dominant author of film and thus also, its sole copyright owner.

Thus, if it is considered infeasible to make the director of a film its joint author in all cases, the authorship claim could be left to be determined by the court in each dispute as per the facts and circumstances of the case. The factors considered in this case could provide a useful yardstick for such determination.

I believe that monetary risk should not be the ultimate determinant of authorship and copyright ownership in a movie. A director should be given due recognition for his creative work, given the critical role he plays in the making of a movie. The current declination of a directors’ authorship of a movie not only defies Locke’s labour theory but also derogates Hegel’s theory of IP as an expression of one’s personality.