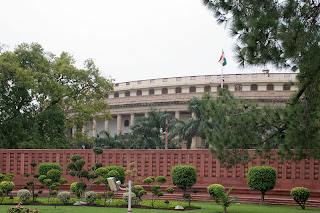 The Parliamentary Standing Committee, headed by Shri. Oscar Fernandes, examining the ‘Copyright Amendment Bill, 2010’, has finally tabled its report before Parliament. The report is available over here on the website of the Rajya Sabha.
This much awaited report runs into 118 pages and is one of the most comprehensive reports to have ever been authored by a Parliamentary Standing Committee. The report is a stunning victory for lyricists and composers. Book publishers, film and music producers are the big losers from this report and they would do well to urgently hire the services of Ms. Nira Radia, who is well placed to lobby their interests. It should however be pointed out that these recommendations are not binding on either Parliament or the Government.
The main recommendations of the Report have been highlighted below. A detailed analysis of the same will follow later on the blog:
(i) Principal Director: The Committee rejected the Government’s suggestion to allow the principal director to be the joint author of a film along with the producer.

(ii) Commercial Rent: The Committee found the proposed definition to too ‘wide and open-ended’. The committee also noted that there was no clarity on the implications for non-profit organizations and public libraries. The Committee therefore sought revision of the definition in such a manner that it clarifies the ambiguities pertaining to libraries/educational institutions.

(iii) Communications to the Public: The Committee accepted the amendment which amongst others changes was expanded to cover even ‘performances’.

(vi) Clause 6 – Section 18 – Assignment of Copyright: The Committee has accepted both amendments to this clause. This was one of the most contentious amendments in the Bill and can be seen as a clear victory for lyricists and composers. The Committee has taken note of the Supreme Court decision in the IPRS case in 1977 and has stated that the proposed amendments are merely a reiteration of Section 13(4) of the Copyright Act. This amendment would therefore allow composers and lyricists to retain their rights over the work which may have been incorporated into a cinematograph work. Thus although the producer of the movie is the first owner with respect to the music when it is used as part of the cinematograph work, the lyricist or the composer will be considered first owner for all other purposes.

Most interestingly the Committee also recommended the addition of the following proviso to Section 18: Provided also that the author of the literary or musical work included in a cinematograph film shall not assign or waive the right to receive royalties to be shared on an equal basis with the assignee of copyright for the utilisation of such work in any form other than for the communication to the public of the work along with the cinematograph film in a cinema hall, except to the author’s legal heirs or to a copyright society for collection and distribution and any agreement to contrary shall be void“.

This would mean that even if an author were to licence his rights he would have to receive a minimum 50% of the royalties in all cases where the work is exploited except when it is exploited as a part of a cinematograph film in a cinema hall. The provision also makes it clear that any contract attempting to waive these rights is void in law.
Another similar proviso has been added to cater to the interests of lyricists and composers in the case of sound recordings. The same is reproduced below:
Provided also that the author of the literary or musical work included in the sound recording but not forming part of any cinematograph film shall not assign the right to receive royalties to be shared on an equal basis with the assignee of copyright for any utilisation of such work except to the author’s legal heirs or to a collecting society for collection and distribution and any assignment to the contrary shall be void.

(vii) Section 19(9): The Committee has also proposed the following proviso to Section 19: No assignment of copyright in any work to make a cinematograph film shall affect the right of the author of the work to claim an equal share of royalties and consideration payable in case of utilisation of the work in any form other than for the communication to the public of the work, along with the cinematograph film in a cinema hall.

This provision basically allows the author to demand 50% of royalties and consideration that maybe collected as a result of the utilization of the work in a cinematograph work which is communication to the public in any form including the screening of a cinematograph film in a cinema hall. This would mean that a composer or lyricist would receive 50% of all royalties from the exploitation of the work as a part of the cinematograph work itself. It is not clear how this will be calculated.

A similar proviso is added with respect to ‘sound recordings’: “No assignment of the copyright in any work to make a sound recording which does not form part of any cinematograph film shall affect the right of the author of the work to claim an equal share of royalties and consideration payable for any utilization of such work in any form”.

(ix) Section 31A: The Committee has expressed an apprehension on expanding the scope of compulsory licences and has asked for the Government to ensure that the same did not conflict with the Berne Convention.

(x) The Disability Provisions: The Committee has accepted all the objections of disability activists and has recommended that the Government look into all recommendations made by them. The disability activists have requested the widening of the proposed Section 52(1)(zb) to include all special formats and not just Braille formats. They had also requested that compulsory licences be made available to even those organizations working on behalf of the disabled.

(xi) ‘Cover Versions’: The Committee accepted the recommendations to shift the infamous Section 52(1)(j) out of Section 52 and into Section 31C of the Copyright Act.

(xiii) Technology Protection Measures: The Committee has accepted the proposed Section 65A and has recommended that it be maintained in its broad terms.