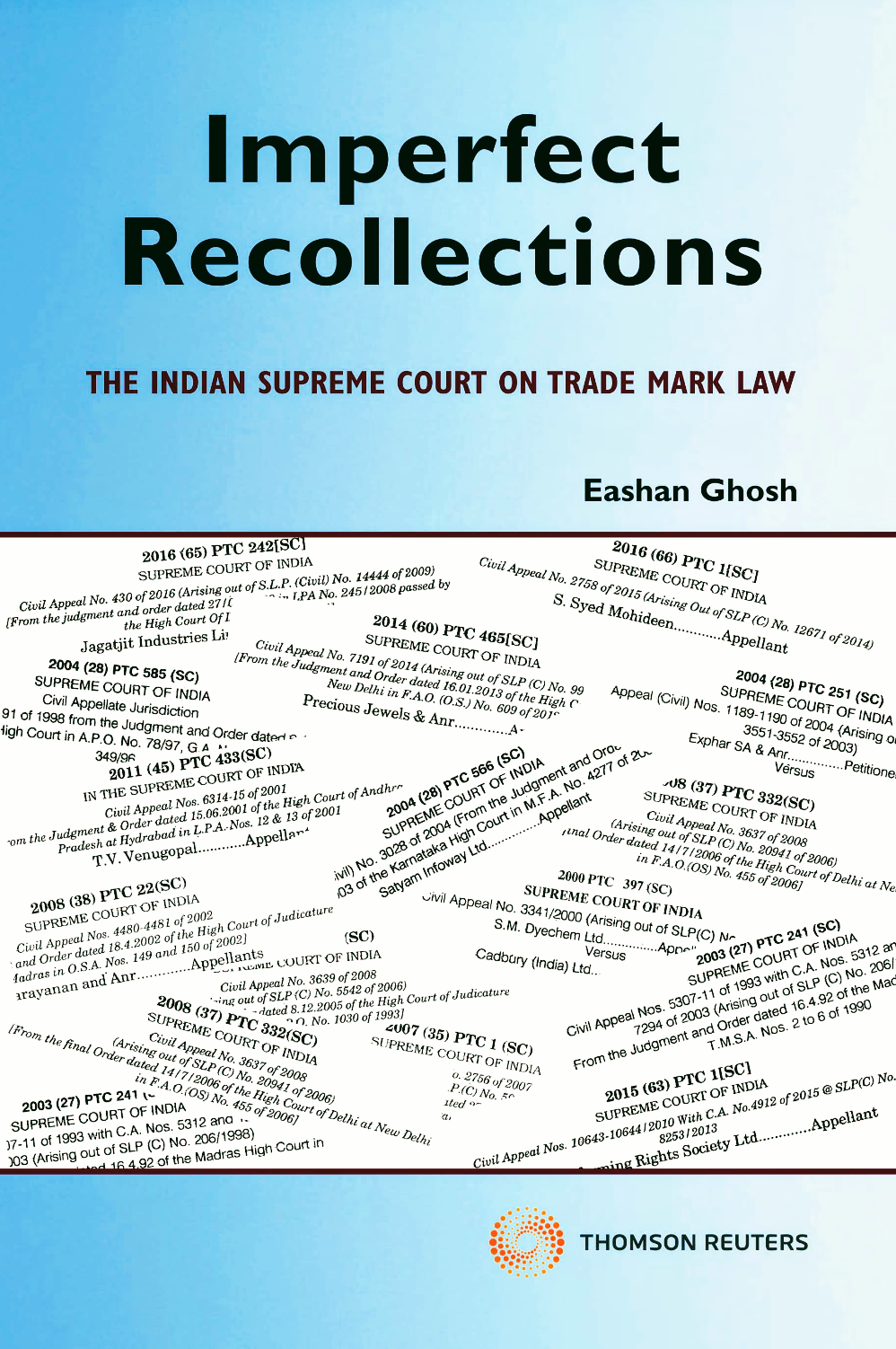 I am delighted to take this opportunity to share with the SpicyIP community the release of my first book, Imperfect Recollections: The Indian Supreme Court on Trade Mark Law (Thomson Reuters, 2020, ISBN-13: 978-9389891454).

In it, I tell the story of Indian trade mark law through Supreme Court cases.

The book is a collection of thirteen essays divided into three parts.

The essays on the similarity inquiry address perhaps the most important question in Indian trade mark law: on what basis can rival trade marks said to be similar enough to warrant legal intervention?

To this end, the first half of the similarity inquiry discussion is entirely narrative in nature. It picks up this inquiry from its origins in independent India and through a series of flagship decisions in the early years of the Supreme Court. Each of these rulings, adding to and taking from the ones before it, constructed a valuable substructure for later courts.

The latter half of the discussion examines the similarity inquiry in a more modern setting, against the backdrop of cases decided by the Supreme Court in the 21st century. It deliberates, also, on some specific issues, including the application of differing standards of similarity to classes of products/services and purchasers, and the extent to which the classic similarity inquiry solves for more modern functions of trade marks.

In the jurisdiction essays, I pick out three issues on the subject: what it means for a court to have jurisdiction over a trade mark case, how trade mark law links cause of action and jurisdiction, and the stages and sufficiency of facts informing when and where a trade mark claim may be instituted. This is followed by an essay dedicated to the clause offering Plaintiff-option jurisdiction under Section 134(2) of the Trade Marks Act and its transformative impact on recent jurisdiction practice in trade mark cases.

The first of these is on the descriptiveness question. This is a short inquiry on the circumstances in which courts can authorize actions to safeguard the use by rights holders of descriptive or common words. The second essay scrutinizes the role of the Registrar of Trade Marks in issuing restrictions on trade mark registrations. The final essay in this section takes up the prior use question, which, thanks to profound changes in the lifestyle, media and internet habits of common purchasers, has undergone a remarkable legal transformation in recent years.

The final part is led by an essay on the twin defences of delay and acquiescence in trade mark claims. This essay underscores that the two defences, though often applicable to similar cases, can diverge in critical ways. The next essay is on honest concurrent use. It focuses on the three most prominent applications of honest concurrent use under Indian law: the pure honest concurrent use defence, acquired distinctiveness, and the exemption for names and descriptors.

The section continues with an essay on criminal proceedings. These proceedings are somewhat marginalized in practice today, but carry a surprisingly rich history of case law, and draw on a stylistically disparate set of legal actions.

The final essay is on injunctions and relief. It assesses two prominent trends that have dominated Supreme Court case law on this subject recently. The first of these has been the explosion in interim injunctions, especially against Defendants set ex parte. The second has been a growing reluctance by the Supreme Court itself to weigh in on important trade mark law discussions, expressing a strong preference to shepherd cases to trial.

By a narrative-style re-telling of Supreme Court cases in each essay, I have attempted to address some of the most persistent criticisms typically made of long form academic writing on Indian trade mark law. I have also tried to offer a deeper, more systematic critique of the cases themselves and, with it, some reflections on the role of the Supreme Court in the broader Indian trade mark law meta.

The book is available for order online at the following links (please check for delivery area accessibility): Kstor and Amazon. It can also be found in the recently published list of IP books on this blog (also accessible from the Resources section of the website here).

I am happy to take questions about the book, and welcome comments and feedback. Please feel free to reach out to me in the replies below or on my Medium page.

Note: SpicyIP is a participant in the Amazon Associates Program, an affiliate advertising program designed to provide a means for sites to earn advertising fees by advertising and linking to amazon.in.