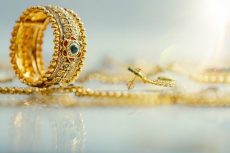 In Part I, in the light of jurisprudence, I had analysed whether copyright or design law would be the appropriate IP for jewellery protection. Additionally, I had also discussed if ‘adaptation’ or ‘reproduction’ would be the more suitable term for referring to the conversion of 2D drawings into 3D jewellery. In Part II, I look at other questions such as what would happen if a suit in respect of copying of jewellery is brought under copyright law and passing off, under design law and passing off, or under design law and Trademarks Act? I will also discuss the best mode presently available for protection of traditional designs in jewellery such as temple jewellery, meenakari, tarakasi etc.

Trademark Protection and Passing Off

The name and logo of a jewellery brand can be protected under trademark law. Interestingly, in A. Sirkar v. B. Sirkar Jahuree Pvt. Ltd., the grounds claimed by the plaintiff were copyright infringement and passing off. This action could probably be entertained by the court, as there does not seem to be any provision preventing dual protection. In their contentions, the plaintiff had also claimed some of the pieces of their jewellery were eligible for protection as shape of goods. Additionally, the defendant had claimed that the plaintiff can only protect his right in the shape of goods under Section 2(m) of the Trademark Act, 1999. This issue was neither discussed nor decided upon by the court. It is surprising how both the parties agreed that jewellery could be protected as shape marks, when the law says otherwise. It would be interesting to see if the court examines this issue in detail. If we examine Section 9(3) of the Trademarks Act, 1999 which deals with the absolute grounds for refusal of trademark protection, it provides that ‘a mark shall not be registered as a trade mark if it consists exclusively of ….(c) the shape which gives substantial value to the goods.’ After a bare perusal of the above section, it appears that jewellery would be excluded from shape mark protection.

Can a party approach the court for remedies under Designs Act, 2000, as well as passing off? As per Micolube India Ltd v. Rakesh Kumar, both can be pursued as separate causes of action. In the case, a three judge bench of the Delhi High Court observed– that design infringement is based on ‘uniqueness, newness and originality of the design’, and passing off is based on misrepresentation and damage to goodwill. In that case, there had been an attempt to combine them as a single cause of action and this was denied, leaving open the possibility of them being taken up separately within the same suit. (case discussed here)

In A. Sirkar, the plaintiff had alleged that the defendant had been selling identical jewellery, but the defendant had not claimed that the jewellery being sold by them was the plaintiff’s. Since the plaintiff was creating bespoke jewellery, a customer would probably expect that the plaintiff’s designs will only be sold at their shop and if it is being sold anywhere else, they might assume there to be some connection with the plaintiff. If the plaintiff can prove that the public was associating the defendant’s products with that of the plaintiff’s, they can successfully plead for passing off. Depending on the court’s determination regarding association, the misrepresentation criterion may or may not be fulfilled. And if misrepresentation cannot be proved, then the question concerning damage to the goodwill does not arise. (For more information on the general conflict between passing off and design protection, earlier posts can be found here, and earlier posts on trademark and design overlap can be found here) 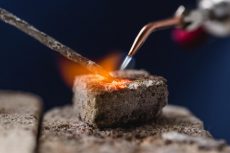 Many regions in India are famous for their traditional jewellery designs that have been passed down from generation to generation. The traditional jewellery is linked to the cultural identity of the regions and is not a mere decorative item. Usually the specific communities that were engaged in creating the jewellery two centuries ago, are presently involved in continuing the craft. For example, Cuttack is famous for its silver filigree work, known as ‘Tarakasi’, where jewellery pieces of trellis-like appearance are made from thin hair-like silver wires. This craft is said to have been introduced during the Mughal period and the work is community and heredity based. Tarakasi is linked to the cultural identity of Odisha. It is worn by Odia brides, Odissi dancers and is also used for creating the backdrop for Durga idols during Durga Puja. Similarly, ‘Temple jewellery’ originated in the 9th century and forms an important part of South India’s cultural heritage. Initially, it was created for royal families of the Chola and Pandya dynasty so that they could offer it in the temples and after that, royalty and temple dancers started wearing it. Later, the common public began using it. And under the patronage of Raja Man Singh Mewar, the creation of Meenakari jewellery flourished in the 16th century and since then, Rajasthan has been renowned for it.

All the traditional jewellery discussed above, fall under the category of traditional cultural expressions (TCEs). WIPO has described TCEs as including ‘songs, dances, handicraft, designs, ceremonies, tales or many other artistic or cultural expressions’, which ‘form part of the identity and heritage of a traditional or indigenous community’ and ‘are passed down from generation to generation.’ Presently, India does not have a sui generis legislation for protecting TCEs and because of this, the creators are left to choose between certification trademark (CTM) or geographical indication (GI) protection or both. (Adyasha has examined the approaches considered by WIPO’s Intergovernmental Committee for the formulation of a sui generis legislation for TCEs.)

Copyright protection requires there be a single owner, ‘originality’, and for the determination of the duration of protection, a definite date of creation is required. All of these requirements make copyright impractical for protecting TCEs. With there being multiple creators of traditional jewellery, the customers will not assume that the products are coming from a single source (person/entity). In the absence of a label informing the customers the source of the products, the customers cannot differentiate between silver filigree coming from Bhubaneswar and Cuttack, making it difficult to prove misrepresentation and thus, eliminating the ground of passing off. (In her post, Sreyoshi has highlighted the difficulty with protecting TCEs (referring to hand block prints) under copyright and trademark law)

The names such as ‘Tarakasi’ and ‘Meenakari Jewellery’ could be protected as CTM. However, a precondition for CTM registration is that there should be a body for certifying the products. This would require that the creators of jewellery come together to form a governing body. This might be difficult in practice, as usually there is hardly any awareness regarding the laws among many of these communities. Section 9(b) of the Trademarks Act, 1999 prohibits the registration of trademarks that ‘consist exclusively of marks or indications which may serve in trade to designate the…geographical origin’ of the goods. Based on a literal interpretation of the section, it seems that indications such as ‘Silver filigree of Karimnagar’ would not be excluded from the ambit of CTM protection and only marks like ‘Karimnagar’ would be excluded. Additionally, CTM cannot protect the subject matter, as previously discussed above, jewellery may not be eligible for protection as shape marks.

GIs can be held collectively and protects the indications for unlimited duration. A GI registration empowers the registered proprietor (GI holder) and the authorised users to prevent any use of an indication along with products that have not been manufactured by the authorised users. This means that if a GI is granted for ‘Tarakasi’ from Cuttack, only the authorised users of Tarakasi can use the indication. Even if jewellers from Bhubaneshwar manufacture similar silver filigree products of higher quality, they cannot use the term ‘Tarakasi’ with their goods. Section 22 of Geographical Indications Act, 1999 enlists the acts that would constitute infringement of a registered GI. Like the governing body of ‘Darjeeling Tea’ has registered the name as a GI as well as CTM, the creators of the traditional jewellery could also opt for such simultaneous protection.

In the past, some GIs that have been registered for traditional jewellery designs in India – and have somehow done this without making mention of the connection between those designs and the place of origin! In 2006, ‘Silver Filigree of Karimnagar’ was registered as a GI in class 14 for jewellery, as well as, in other classes for non-jewellery decorative items like key chains, cutlery, mirrors, etc. Its journal copy indicates that jewellery has been produced in Karimnagar for generations and the method of production is also stated in detail. However the information provided in the journal copy fails to demonstrate how the quality, characteristics or reputation of the jewellery is linked to its geographical origin. Interestingly, the application also provides that, in India, ‘filigree is specialty of Cuttack in Orissa and Karimnagar in Andhra Pradesh’. Orissa should also consider registering a GI for its filigree jewellery and it appears that the issue of registration of Tarakasi (silver filigree jewellery) was brought before the Orissa legislative assembly in 2019. After searching the GI registry, it seems no action has been taken about it.

A GI was granted for ‘Thewa Art Work’ from Pratapgarh (Rajasthan) in 2014. According to the journal copy, Thewa art work does not itself refer to jewellery, rather it ‘becomes jewellery when applied on items used for jewellery’. The GI originated three to five hundred years ago. Here also, the journal copy does not refer to any characteristics that can be specifically attributed to the geographical origin of the product. 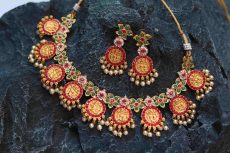 The relevance of discussing the source of raw materials for Silver Filigree of Karimnagar, Thewa Art Work and Temple Jewellery of Nagercoil, is to understand if the quality, characteristic or reputation of the jewellery can be attributed to the geographical region (terrior) or if the same jewellery can be produced anywhere in the world. Article 22 of TRIPS provides that geographical indications are ‘indications which identify a good as originating in the territory of a Member, or a region or locality in that territory, where a given quality, reputation or other characteristic of the good is essentially attributable to its geographical origin.’ (emphasis supplied) As there appears to be no link between the characteristics of the jewellery and their place of origin, it does raise questions regarding the basis on which the GIs have been granted. In case of jewellery, the raw materials such as gold, silver, stones are generally sourced from other places and this could create a problem when trying to register GIs. The lack of TCE protection has forced the creators of traditional jewellery to shoe horn their products into GI protection, which is clearly not meant for products that do not derive any characteristics from their geographical origin. It’s difficult to understand why the GI Registry went ahead with these registrations when the essence of ‘GI’ is missing from the products applied for registration. Another issue with GI protection is that it only protects the name of the products, while the knowledge and specialised techniques associated with it are excluded.

Though a sui generis framework for TCEs would be ideal, however in its absence, the options remaining for producers of TCEs are a piecemeal combination of copyright, design, certification marks, passing off and GIs. It is enough to confuse even lawyers, and also enough to make their purses happy. It is just the creators who have to bear the brunt of this deficiency in the law.