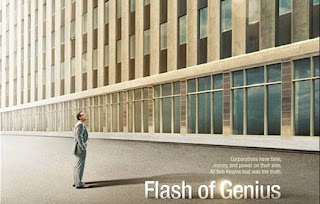 After Hari Puttar, it’s the turn of another movie to take the movie-IP spotlight. However, this time the movie is based around a patent. “Flash of Genius“, starring Greg Kinnear, Lauren Graham, Dermot Mulroney and Alan Alda, is the true (and possibly dramatized – I haven’t seen it yet) story about an inventor Robert Kearns, and his battle with the Big 3 of the Auto Industry in America – Ford, Chrysler and GM. The movie opened out earlier this month, and,as opposed to the reception of Taarzan: The Wonder Car – the last movie I can recollect which involved patents, this seems to be collecting more or less favourable reviews. The story is based on the college professor cum inventor’s long struggle against the U.S. automobile industry. As it turns out, he would dedicate nearly the rest of his life towards fighting to receive recognition for his invention.
Back in 1967 Robert Kearns’ invention, the intermittent windshield wipers, which go on till present day to become part of every car, is an invention that fills an area which researchers had been working on for years. Though engineers at Ford had come up with several similar designs, each one succumbed to some kind of flaw. What Robert Kearns came out with was a system that used an electrical current to flow and fill a capacitor. When the charge reached a certain voltage, it discharged and the wipers wiped. This idea suddenly struck him as he was straining to drive through a drizzle one day and evidently hence the title – it was a ‘flash of genius’. This system, though simplistic sounding, worked better than any of the other designs that had been thought of till then. Bouyed by his success, he approached Ford in order to license out his design to them. . What happens at this point is the crux of the issue. Having applied for about his first patent (he would go on to file for about 30 patents) for his wipers which paused for intervals set by the driver between wipes, making them especially useful in light rains or mist, Robert Kearns is sure that his invention will be received well by the automotive industry. However, after showing some initial interest in the invention, Ford tells Kearns that they are already working on a similar invention, nonetheless, subject to some conditions would like to take a look at it. Unknown to Kearns at that time, he was on the verge of the next breakthrough in automotive technology – moving from electricity into electronics.
After a series of demonstrations, Ford finally accepts Kearns into their wiper development team. They also stated that the law required the disclosure of all the engineering of safety items, including wipers and so he was required to show them the working of his intermittent windshield wipers. A little way down the line however he was told he was no longer required.
Come 1969, Ford releases a new ‘first’ in the industry – an intermittent windshield wiper based on the same configuration of a transistor, a resistor and a capacitor as Kearns’.

After trying and subsequently failing to get an explanation from Ford, Kearns takes the matter to the courts in 1978 for patent infringement. The movie goes on to show the automotive industry (in 1982 he sued Chrysler as well) dangling large amounts of settlement money in front of him, however Kearns is determined to get justice and not just money. Though he eventually wins the legal battles, they cost him his health and family, not to mention huge amounts in legal proceedings (almost $10 million). In the Ford case, the jury turned down Ford’s contention that it was an invalid patent because it contained no new concepts and was an obvious next step. They finally hold that there was infringement, however it was not willful infringement. After some more litigation over the award to be given, it was finally settled at $10.2 million. Chrysler ended up paying about $19 million.

Whether his main objective was to fight for inventors’ rights or to leave behind a legacy for his kids, a Kearns corporation perhaps, it does appear that Robert Kearns was more than just a ‘patent troll’ or only after licensing fees. (Patent trolls are entities which purchase/collect patents in use or not in use and wait for opportunities to sue for infringement by another entity – trolls nowadays are often corporations put together for this sole purpose)

Interestingly, as this blog points out, the title of the movie leaves a lingering doubt as to complete veracity of the movie, as “Flash of Genius” takes its title from the 1941 landmark case of Cuno Engineering Corp. v. Automatic Devices Corp. where J. William O. Douglas uses the phrase to refer to the criteria necessary for obtaining a patent. This doctrine was subsequently repudiated in 1952 by a revision to the Patent Code. Even in KSR v Teleflex, there is no mention of the significance, if any, of a ‘flash of genius’.

For those interested, a well written 1993 article in the NewYorker on the whole Robert Kearns incident is available here.

Also, for those interested, Ford’s press release soon after the movie released is reproduced below:

PRESS RELEASE
The film “Flash of Genius” chronicles the life story of Bob Kearns, who asserted that he invented the intermittent windshield wiper and sued Ford, Chrysler and other automakers for patent infringement. While films like “Flash of Genius” are made for entertainment purposes, the facts are often less dramatic.

Bob Kearns as well as hundreds of engineers from many companies, including Ford, helped develop the intermittent wiper as part of an evolution of existing automotive and electronic components.

While there are inaccuracies in the film, Ford sees no value in re-hashing the history of a legal case that was resolved in court almost 20 years ago, when a jury ruled that Ford did not willfully violate Mr. Kearns’ patent.

Today, Ford continues to make engineering and design breakthroughs in areas such as fuel efficiency, safety and smart technology, and is proud of its 100-year legacy of innovation in automotive technology.