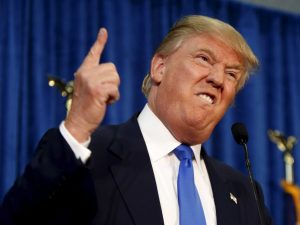 Like with many other things, seems to be angry about the idea of copyright

Given the serious nature of the many wrong doings that Donald Trump has been accused of, copyright infringement is certainly going to be on the bottom of the list of his misdemeanours and something his lawyers should be least bothered about. Nevertheless, with every passing day, charges of plagiarism against Trump and his coterie seem to be piling up. While most of these charges may have an element of truth to them, whether any of them would actually stand the test of copyright infringement in a court of law is altogether a different question.

In this context, we thought it would be fun to bring to you a list of instances when Trump and his entourage have raised eyebrows with their not-so-original expressions:

Trump’s eerily similar speech to the one delivered by ‘Bane’, the villain from the Batman movie series, is the latest one on the list and came during the occasion of his inaugural address as the POTUS. The portion of Trump’s speech, which is alleged to be a replica of the ‘Bane speech’, is the one where Trump promises to transfer power from the elite of Washington D.C. to “you the people”. Although the broad ideas in both the inaugural address and the Bane speech have some resemblance to one another, the only portion where the words have verbatim reappeared is the one cited above, where Trump promises to transfer the power back to the people (check out this video with the relevant portions from both).

While an average viewer might listen to the speech and suspect Trump (or his speechwriters) of having plagiarised, it is highly doubtful whether a claim of infringement can be sustained in this instance. Firstly, as I mentioned, the only portion, which is verbatim reproduced, is a phrase that should be saved by the doctrine of de minimis. Although it is true that while judging infringement, it is “quality and not quantity” that should determine the outcome, the inaugural address only borrows certain broad ideas from the “Bane speech” (if at all it was borrowed) and would most definitely be capable of immunity under the merger doctrine (merger doctrine broadly states that when there are only a few ways of expressing a particular idea, then the expression also won’t be capable of protection).

Even before the POTUS, it was the FLOTUS who got into trouble with her speech during the Republican National Convention in which she allegedly ripped off a substantial portion of Michelle Obama’s speech from 2008. Unlike the Bane speech, in this instance, not only were ideas borrowed from Michelle Obama’s speech but even the way in which they were expressed bore substantial similarity. Here again, one would have to use the touchstone of de minimis and other factors to judge if there was infringement. While some of Trump campaigners had come out in support of Melania stating that the portion alleged to have been lifted constituted only a small portion of her entire speech, whether this is a viable argument would depend on a thorough comparison of the two speeches and if the portion plagiarised can be termed to be the heart of Michelle Obama’s speech.

Problems seem to be following Donald Trump even with the most unlikely of things, as is obvious from this instance when the cake used as part of the Trump’s inauguration celebrations courted controversy. The cake apparently mirrored the cake designed by celebrity chef, Duff Goldman, and used four years ago during the inauguration of Obama’s second term. As per the release given by the bakery, which made the cake in question, they were in fact asked to recreate the cake used during Obama’s inauguration. While it would be a hard stretch to pin the blame for messing up a cake order on the president of the world’s largest democracy, it sure shows that the president would do well to recruit some professionals who understand the idea of copyright. As to the more fundamental question of whether a copyright would subsist in a cake, readers may refer to this.

In addition to the above, Monica Crowley, who was expected to fill-in a key position in Trump’s National Security Council, has been hit with even more serious charges of plagiarism. As I write this post, yet another key member of Trump administration, Betsy Devos, has come under the cloud of plagiarism allegations.

Jokes aside, Trump is not the first one to face charges of plagiarism in his political speeches. During the 2008 election campaigns, the Clinton camp had accused Obama of plagiarising some portions of his speech. Readers may also refer to Balaji’s piece here, which discusses the plagiarism charges levelled against Martin Luther King Jr. Also, it would be unfair to pass a quick judgment on all the allegations of plagiarism against Trump, given how deceptive a place internet can be.

On a lighter note, given the original and varied forms of expression that Trump is capable of coming up with, it is rather disconcerting that he has chosen to borrow strikingly similar expressions from others. Also, considering the fact that Trump’s speeches are couched in words so generic that one would find it impossible to discern any unique expressions from them, it is quite a feat that he still manages to raise suspicions of copyright infringement. Since Trump loves all things ‘right’, all that one can hope is that he warms up to the idea of copy ‘right’ at the earliest!