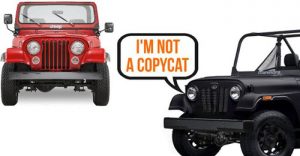 A long-standing rivalry between Mahindra and Mahindra and Fiat Chrysler Automobiles took a new turn on 11th September 2018, when the US International Trade Commission (“USITC”) [the US federal agency which investigates matters of trade and interrelated IP infringement issues] instituted an investigation based on a complaint made by Fiat. In its complaint, Fiat makes allegations of trade dress, trademark infringement and unfair competition under Section 337 of the Tariff Act of 1930 against Mahindra for “sale of certain motorized vehicles and components”. Section 377 provides protection against unfair competition in importation of articles and recognizes various IP infringements as “unfair acts”. This provision vests authority in the USITC to conduct investigations in such matters and protects IP holders from infringing imports.

According to the press release dated 29thAugust 2018 by Mahindra, the complaint alleges that certain features of the Mahindra ROXOR infringes the IP rights of Fiat’s Jeep design as the latter was designed based on the original Willys Jeep. Mahindra defends its stance by stating that the ROXOR was not “an imported low quality “knock-off” kit car” since it was only intended as an off-road vehicle and hence, it does not directly compete with the Jeep. Further, Mahindra’s statement informs us that Fiat is seeking to restrict imports and getting an injunction from the USITC to that effect; it has not claimed for monetary compensation.

This is not the first instance of Mahindra and Fiat warring over IP infringement issues. Earlier, SpicyIP had covered two Mahindra-Fiat disputes which occurred in 2008, one over Mahindra’s ad which used the marquee “jeep” and the other over the design of Mahindra Scorpio’s front grill. It is understood that Fiat and Mahindra entered into an agreement in 2009, according to which Fiat agreed to “never bring such claims” if Mahindra used a grill approved by them. In their press release, Mahindra has claimed that they were using an approved grill and had applied to the Federal Court in Michigan to restrain Fiat from participating in the ITC complaint.

Fiat has specifically claimed the violation of subsection (a)(1)(A) of Section 337 [dealing with unfair methods of competition in importation of articles] and subsection (a)(1)(C) [dealing with importation of articles which infringe registered trademarks]. According to Fiat, the ROXOR infringes its trademark rights in different kind of grills used in the Jeep. (Note that most news articles incorrectly term this as a patent dispute!)

Fiat has been highly protective of its IP in Jeep as was witnessed in its unsuccessful attempt to injunct the sale of the Hummer H2 (alleging infringement of its grill design) and its crackdown on user-generated trademark infringing content on Zazzle.com. It seems Fiat’s main concern in this entire matter is to protect its trademark rights in Jeep’s design and to prevent copycats from diluting its brand image since it hasn’t claimed for any sort of compensation from Mahindra.

All in all, this dispute might hamper Mahindra’s bid to enter the US market or might just boil down to yet another instance of Fiat’s paranoia over its grills!