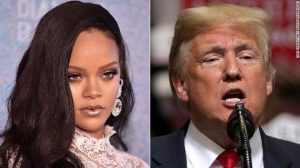 This month saw a highly publicised altercation between pop queen Rihanna and US President Trump.  She called out the President for playing her popular hit song “Don’t Stop the Music” at his rally. In her cease-and-desist letter, Rihanna’s legal team specified that the idol’s consent should have been taken before playing her song at the rally. The issue, however, is more complicated than the simple matter of the artist’s consent to such usage and has been highly debated in the past. This is not the first time a US politician has faced claims of IP infringement for such usage. (In fact, here’s a lengthy list of famous artists who have publicly protested the use of their works by politicians such as Trump, Mitt Romney, Sarah Palin and many more.)

In USA, copyright of musical works are administered by Performing Rights Organisations (PROs) such as American Society of Composers, Authors and Publishers (ASCAP),  Broadcast Music, Inc. (BMI) etc. PROs acts as representatives for musical woks of various artists, songwriters and composers. Politicians need to obtain “public performance” licenses from the appropriate organisations to play the copyrighted musical works at their campaign. If these campaign events are properly licensed, politicians can use these works without taking the prior consent of the concerned artist and avoid copyright infringement suits. The following defences, however, can be availed by artists in such cases:

Status Quo in India: Issue not Addressed Yet

In India, public performance licenses for using musical works at public venues need to be procured from Indian Performing Rights Society (IPRS) or Phonographic Performance Limited (PPL). Though Indian politicians don’t use musical works in their rallies as frequently as their American counterparts, politicians in Meghalaya, Kolkata etc. have been reported to use popular musical works to evoke emotions from the crowd and garner votes. Surprisingly, neither of the bodies have considered the possibility of such legal confrontations arising in the future. Neither IPRS nor PPL address political usage of musical compositions in their public performance licenses.

The legal claims against unauthorised use of musical compositions by politicians in USA have often proven to be ineffective in the past and hence, copyright holders remain dissatisfied with the current legal protection available to them. Usually, PROs in USA issue  “all or nothing”  licenses which grant permission to licensees to use numerous musical compositions under the PRO’s ambit for a fixed fee, thereby allowing politicians to bypass the procedure of gaining the consent of each individual copyright holder. It has been proposed that such licenses should be altered to include clauses which give the power to artists and songwriters to opt out from usage of their compositions at political venues. For example, BMI had introduced a Political Entities license which allows the concerned songwriters or publishers to withdraw any particular musical work from the license. Although such requests can only be made after the song is used, such licenses aid in preventing further usage of the copyrighted work. ASCAP’s guidelines also suggest that before availing a public performance license, politicians must gain the artist’s and/or the songwriter’s consent for using the copyrighted musical work.

Conclusion: A shift in current licensing norms and a shift in attitude towards artists’ and songwriters’ copyright in their musical compositions would both go a long way in preventing such legal confrontations. Also, a suitable licensing framework addressing such issues needs to be adopted in India to prevent similar controversies from cropping up in the future.