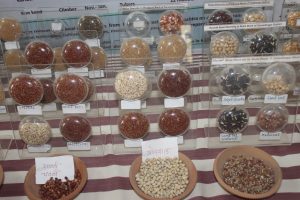 Near the beginning of this position paper we gestured briefly toward some links between Mendelian genetics, with its distinctive emphasis on hybrid seeds, and post-Green-Revolution high-yield, industrially farmed, chemically saturated agriculture.  With the two genetics pedagogies in view, we can now pursue a further question: What, exactly, might the affinities be between a start-with-Mendelism, “genes for traits” training in genetics and “farming-as-spraying” industrial agriculture?  Or, to put the same question from the opposite direction, what, exactly, might the affinities be between a more Weldonian, interactionist, “genes, environments and variability” training in genetics and the more sustainable style of agriculture envisaged in this position paper?

We shall proceed by addressing the latter form of the question. Our answer to it, in brief, is that a farmer taught well within a Weldonian curriculum has a better shot than a Mendelism-trained farmer at acquiring the following three, sustainability-promoting cognitive attitudes or biases:

ii) No presumption in favour of hybrid seeds

Let us consider each in turn:

i) No indifference to the role of the environment in bringing about phenotypic effects. Imagine our farmer in an Agricultural Extension classroom where, from the start and throughout, it is hammered home that a bit of chromosome has its effect on a body in a context, under conditions – and that is always the case – it is never not the case – and if it seems that you can forget about the conditions, that is because environments have become standardized.[1] Indeed, one perspective on post-Green-Revolution agriculture sees it as an agriculture which seeks to adapt local environment to globally distributed seeds, with the adaptation taking place thought the use of machinery, pesticides, herbicides, fungicides, intensive irrigation, etc. Farmers are never invited to see what they are doing in that way;[2] rather, they are invited to see the seeds they buy as genetically superior, full stop, and to see all the accessories that are needed to bring out that superiority as merely damping down whatever might inhibit the full realization of that superiority. By contrast, a Weldonian farmer would be alert to how profoundly dependent the marketed seeds are on re-engineered surroundings, and so be better positioned to compare and contrast the environmental toll of using those seeds as against that of using local seeds already adapted to local conditions.[3]

ii) No presumption in favour of the superiority of hybrid seeds. The vocabulary of “F1 hybrids” was introduced by Bateson, as a way of labelling the offspring of an initial cross: the first “filial” generation.[4] When two lineages are crossed, sometimes the character of the hybrid will resemble one parent or the other, as with Mendel’s peas. But as Mendel knew, there are also crossings where the hybrid character is unlike either parent but is instead distinctive, sometimes even attractively so. It had been a perennial frustration for farmers and breeders and horticulturalists that such hybrids tended not to “breed true” but instead to have offspring with a mix of the characters. As Bateson was the first to point out, Mendelian principles explained that “breaking-up” of the hybrid character, and even, via segregation, explained why the resulting characters included the parental characters and came in the proportions they did.

Hybrids, and above all hybrid corn, went on to become the great emblem of the power of Mendelian genetics to deliver impressive results agriculturally. Hybrids and the Green Revolution went hand in hand. Hybrid seeds were what was offered as salvation in Mexico, India and elsewhere; hybrid seeds were what came to be taken for granted as the only way to get yields up high enough to stave off starvation.[5] Yet for decades, the geneticist Richard Lewontin has been arguing – another instance of counterfactual history of genetics – that there was no inevitability here. We might well have had corn as high-yielding as the hybrid corn that Nikita Kruschev famously came to admire, yet produced through open pollination and selection.  But it was not in the financial interests of anyone selling the corn to produce the seeds by those means.  The early promoters of hybridization were entirely plain-speaking about the fact that, from the breeder’s point of view, the great advantage of using hybridization is that farmers need to come back to the market – and so to the breeder – year on year if they want to plant those seeds. With non-hybrid seeds, the breeder loses all control after that first sale. With hybrid seeds, control is maintained.[6]

iii) No presumption against a variety whose attractive character is region-specific. Recall the story of the farmer Jitul from Assam, who matches different plants with different parts of the life cycles of silk worms. By conserving geographically highly-delimited varieties of the plants on which his silk worms grow, he has been able to optimize the production process. He is, in the old expression, doing well by doing good: creating a market niche for a unique product in a way which maintains otherwise threatened biodiversity. And the fact that the plants mainly thrive in just a few valleys in Assam does not count against those plants, reducing their value. On the contrary, here is a marvellous example of someone working with gene-environment interactions rather than fighting them.

Charnley, Berris, and Gregory Radick. “Intellectual Property, Plant Breeding and the Making of Mendelian Genetics.” Studies in History and Philosophy of Science Part A 44, no. 2 (2013): 222-33.

Conway, Gordon R, and Edward B Barbier. After the Green Revolution: Sustainable Agriculture for Development. Routledge (2013).