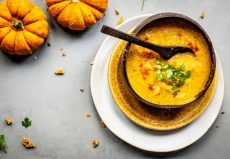 Earlier this month, Pune-based home maker Shubhangi Patil was granted a patent over her unique ragi walnut soup mix composition (Edit: Application No. 201621034764). The mix claims to combine ragi (finger millet) and walnut to create a nutrient-rich substitute for non-vegetarian foods containing calcium, Omega-3 and Omega-6 fatty acids which can be used to treat Vitamin B12 deficiency. According to the patentee’s statements to The Hindu’s Business Line, she invented the soup out of necessity owing to her husband’s health condition which needed him to consume protein-rich foods such as eggs and meat whereas he preferred only vegetarian diet.

Since the 2005 amendment to the Patent Act, 1970, the Indian Patent Office has granted patents on food-related inventions. A previous post by Kiran Mary George explains how the threefold requirement of novelty, non obviousness and utility, apply to food-related inventions. Some Indian food patents have been granted on: wheat chocolate bar for sustained energy release (IN 229291), fermentation process for production of tender coconut wine (IN 209015), and fried banana masala chips making process (IN 198069).

When it comes to food-related inventions, Section 3(e) is particularly relevant as it screens claims to ensure that frivolous patents aren’t granted. This section assists the Patent Office in determining whether the food-related claim is an invention in the first place. Section 3(e) disqualifies claims that fail to meet its standard in addition to the threefold test of patentability. It prohibits the grant of patent on substances ‘obtained by a mere admixture resulting only in the aggregation of the properties of the components thereof or a process for producing such substance’ (emphasis added). To avoid attracting Section 3(e), a claim must show that the interaction between the components involved in the invention achieves a combined effect which is different from the sum total of the effects of the individual substances. The invention should be able to show an unforeseen synergistic effect, rather than a mere additive effect. That is, (A) + (B) = (A+B).

This presents a challenge before food-related inventions because usually, food items are simply the expected sum total of their individual components. A new method of cooking rice might not have been previously employed, but if it provides the nutritional value that is expected to be provided through such a method or by use of the chosen ingredients, i.e., it shows nothing more than an additive effect.

The ragi walnut soup applicant, in reply to the 3(e) objection, states that the soup shows ‘enhanced health benefits and nutritional values’. While it does provide the nutritional value of each of the ingredients and that of the soup mix, it is doubtful whether this sufficiently proves synergistic effect. To meet the threshold, experiment results must show the individual values of ingredients as well as their expected sum total value. This sum total would then serve as a reference point to compare with the actual value obtained, in order to prove that the latter is different from what the ‘mere admixture’ would provide. Thus, both the expected (A) + (B) = (A+B), and the invented (A) + (B) = (A+B)’ must be shown and the difference between (A+B) and (A+B)’ be explained through data analysis. Without this, the synergistic effect analysis is incomplete. And yet, this has passed the scrutiny of the Patent Office.

Nonetheless, all said and done, food is rather innocuous and it would be interesting to see how this patent is enforced in other people’s kitchens. However, let’s turn to a sector that has more noticeable, far-reaching consequences. Section 3(e), along with Sections 3(d) and 3(i), forms a set of anti-evergreening provisions present in the Act that create exceptions from patentability in order to prevent the extension of patent monopoly over variants of existing inventions. Thus, a detailed scrutiny into whether Section 3(e) disqualifies the patent is absolutely necessary for the safeguards in the Patent Act to fully operate. While the soup mix patent does not have significant implications on public health, the Patent Office has faltered in its assessment of synergistic effect in case of other types of patents as well, including pharma patents.

AccessIBSA’s study of 2293 patents granted between 2009 and 2016 shows that nearly 72% of these patents were granted for marginal improvements over previously patented drugs. The study estimates that from this pool, as many as 297 patents are likely in violation of Section 3(e). The complete report can be accessed here. 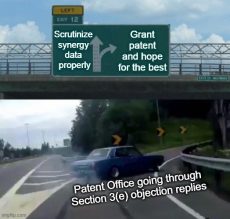 Let’s look at some other recent examples (and a shoutout to Sandeep Rathod and others who regularly mention such examples on their social media pages). In the proceedings of a recent post-grant opposition filed against Troikaa Pharmaceuticals for IN 231479, one of the grounds for opposition was Section 3(e). The Controller found that there was no data provided to establish or substantiate unexpected synergistic effect between the components used in the formulation when taken individually or in combination. The revocation order emphasized that the data showing that effect must be clearly incorporated in the description by way of comparison. Similarly, a pre-grant opposition against Lincoln Pharmaceuticals’s application for ‘A Pharmaceutical Formulation for Paracetamol Injection’ (Appl. No. 1746/MUM/2008) succeeded in obtaining a rejection on multiple grounds including Section 3(e). The Asst. Controller specifically stated: ‘since Glycofurol and alcohol are individually known to solubilize paracetamol, it was imperative to provide comparative data to show the synergistic effect (enhanced solubility) achieved through the combination of solvents.’

Although IN 231479 was ultimately revoked and 1746/MUM/2008 rejected, their lack of synergistic effect data went unnoticed in the Patent Office’s Examinations. The fact that such a serious issue wholly escaped the scrutiny of the Patent Office and only came to light through Opponents’ intervention is worrying.

Section 2 of the Patents Act lays down the conditions of patentability, whereas Section 3 creates exceptions from patentability. The Supreme Court in Novartis v. Union of India, while discussing therapeutic efficacy under Section 3(d), held that in order to gain a chemical or pharmaceutical patent, a product must pass this test in addition to the requirements of Sections 2(1)(j) and 2(1)(ja) (see para 190-192).

However, pharma companies have been seen to rely on novelty and/or non-obviousness of a claim to bypass the requirements of Section 3(e). In reply to the Patent Office’s Section 3(e) objection in Application No. 4045/DELNP/2014, the applicant stated that since the novelty of the composition was acknowledged, it cannot be deemed a mere admixture of known components. The Controller then proceeded to grant the patent. Similarly, in Application No. 4538/CHENP/2013 filed by Genentech, the Patent Office, after raising aSection 3(e) objection, then went on to accept that the provision would not be attracted because novelty and inventive step are acknowledged. These are not isolated cases. The AccessIBSA report linked above lists 19 pharma patents between 2009-2016 where such an objection has been overcome by citing Section 2(1)(j).

Considering Novartis makes it clear that the Sections 2(1)(j) and 2(1)(ja) and Section 3(d) have to be satisfied separately, the Patent Office’s practice of allowing applicants to circumvent Section 3(e), a similar anti-evergreening provision, by showing novelty and/or inventive step, cannot make for sound legal precedent.

The synergistic effect in an invention cannot simply be stated, but needs to be shown through detailed, comparative analysis of data relating to individual and combined results. This would entail not only the statement of the result or technical effect achieved by the claim, but the description and measurement of the improvement from what would have been the expected result. While several errors persist, the Patent Office has also rightly rejected a number of applications which have not shown how synergistic effect is achieved (see for e.g. applications 2641/MUM/2015 and 4670/DELNP/2011). Such an in-depth scrutiny approach needs to be followed for all patent applications.

Unlike the more controversial Section 3(d), so far Section 3(e) has not received equal international attention. However, its importance in preventing evergreening attempts cannot be undermined. AccessIBSA’s report shows that only 12 patents were granted where the order clearly cited the data that proves synergism (see page 27). In many others, either no synergism data was reproduced in the order (it might still have been submitted to the Patent Office) or the order does not provide any clear reasoning as to how the objections were overcome. This, coupled with the estimated 72% error rate in secondary patent grants, makes it evident that the Patent Office needs to be more vigilant and observe stricter scrutiny.

(Note: All comments on the specific patent applications/grants above are after a personal first level analysis and readers are welcome to give in their comments if they have a contrary take or more information on the same).