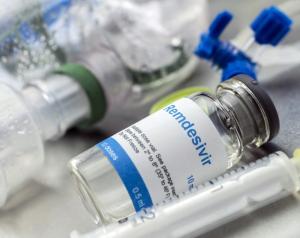 A vial of Remdesivir (image from here)

Amid the ongoing surge in Covid-19 cases, many states in the country are reported to be facing shortage of Remdesivir, an anti-viral drug patented by Gilead. The drug was approved by India’s drug regulator in June last year for restricted emergency use for treatment of Covid-19 patients and is presently being manufactured and supplied by seven Indian companies under a voluntary license agreement with Gilead. In order to address the shortage, the Government has (among other measures) banned its export for now and asked the manufacturers to ramp up its production to their full capacity. However, given the continuing rise in cases and the resultant soaring demand for the drug, it is not clear whether these companies will be able to timely fulfill the demand.

Last year, when Gilead was yet to launch the drug in the market and the licensed manufacturers were awaiting marketing approval, the Maharashtra Government had announced its decision (put on hold later) to import 10000 vials of a generic version of this drug from Bangladesh (it being the first country in the world to manufacture a generic version of the drug). Individual patients were also reported to be importing the drug from Bangladesh for personal use with the drug regulator’s approval due to its unavailability in India at that time (see also here). There was also a report of a Mumbai based pharma company seeking approval to import the drug from Bangladesh for supply in Maharashtra on a cost to cost basis.

Given the urgent unmet demand of the drug currently prevailing in many parts of the country, governments, hospitals, pharma companies, individuals etc. may again consider importing the drug from Bangladesh, which has been exporting the drug to many countries. Would such import (after obtaining an import license from DCGI) infringe Gilead’s patent under India’s Patents Act? In this post, I seek to explore the legal issues surrounding this question and revisit the debate on parallel importation of patented inventions in India.

Under section 48 of India’s Patents Act, 1970, Gilead, being the patent holder for Remdesivir, has an exclusive right to prevent third parties from importing it to India without its consent. However, this right is not absolute. Under section 107A(b) of the Act, any person can import the drug (without the patentee’s consent) “from a person who is duly authorised under the law to produce and sell or distribute the product”. Therefore, import of Remdesivir by any person in accordance with this provision will not be considered as an infringement of Gilead’s patent rights and Gilead has no right to prevent such import.

Is the import of Remdesivir from Bangladesh covered under Section 107A(b)?

Bangladesh, being a least developed country (LDC), is not obligated to protect product patents under TRIPS until 2033. Therefore, any person in Bangladesh can manufacture, use, sell or distribute a drug which is patented in other countries without seeking a license from the patentee. Pursuant to this, many pharmaceutical companies in Bangladesh (Beximco Pharma, Eskayef Pharma etc.) have been manufacturing generic version of Remdesivir without obtaining a license from Gilead. Now, whether an import from these companies is permitted under Section 107A(b) depends on whether these companies qualify as “a person who is duly authorised under the law to produce and sell or distribute the product”.

However, after the amendment, the requirement of ‘authorisation from the patentee’ was done away with. One can now import a product from any person who is ‘duly authorised under the law’, whether ‘authorised by the patentee’ or not. Unfortunately, however, it is still not clear what is meant by “duly authorised under the law” and it has not been interpreted by any court yet in my knowledge. Going by a plain meaning reading of the provision, as long as a person has obtained marketing approval for Remdesivir from the drug regulation authority in Bangladesh, they would be considered to be ‘duly authorised under the law’ to manufacture and sell or distribute the product. So, a person in India can legally import Remdesivir from them under Section 107A(b) without obtaining permission from Gilead. In fact, as discussed by Prof. Basheer in one of the first few posts on the blog in 2005 here (interestingly, in the context of the anticipated flu pandemic then) and later in another post in 2008 here, an Indian company (which is otherwise not permitted to manufacture and sell Remdesivir in India) could arguably use this provision to even set up operations in Bangladesh (or any other LDC), manufacture the drug there and export it to India and supply it to the Indian market. So far no Indian company seems to have gone this route though.

The Government also seems to have adopted an interpretation that allows such import. This is reflected in a circular that was issued by the Central Board of Customs & Excise (CBEC) on 8th May, 2012 (discussed by Prashant in an earlier post here) clarifying that the IPR (Imported Goods) Enforcement Rules, 2007 will not apply to ‘parallel imports’ under the Patents Act, 1970. The clarification, as stated in the circular, was based on DIPP’s interpretation that Section 107(A)(b) provided for parallel imports, which were defined in the circular as “import of original/genuine products (not counterfeit or pirated) which are sold/ acquired legally abroad and imported into the country, by persons other than the intellectual property right holder without permission/authorisation of the IPR holder.”

Such interpretation, however, has been met with criticism for hitting at the very essence of the patentee’s exclusive right to import under Section 48 by permitting import of  products whose first sale has also not been authorised by the patentee and vis-a-vis which its exclusive right have thus not been exhausted. It is also likely to be violative of (Article 28 of) TRIPS. A PIL was also filed challenging the legality of the above mentioned Government’s circular, arguing that Section 107A(b) doesn’t permit all kinds of parallel imports but only permits imports from a person who is duly authorized under ‘Indian’ law. The petition was, however, dismissed by the court noting that persons concerned with imports and  affected by the circular could approach the court themselves. Given the ambiguity in the provision and the problems with its plain meaning interpretation, Prof. Basheer and Mrinalini had recommended amendment to it. But till the provision is suitably amended, it would be interesting to see how it would be interpreted by the court if a case comes up before it.

Can the Govt import Remdesivir under Sections 47 and 100 ?

Other than under Section 107A(b) which allows any person to import, the Government can also import the drug under section 47 and section 100 of the Patents Act.

Section 47(4) allows for the import of any patented medicines or drugs by the Government (State or Central) for “the purpose merely of its own use” or for “distribution in any dispensary, hospital or other medical institution” maintained by or on behalf of the Government or any other such institution notified by the Government” having regard to the public service rendered by such an institution. The Government is not required to pay any royalty to the patentee for import under this provision.

Therefore, under the Patents Act, the Central Government as well as any State Government can import Remdesivir from Bangladesh (or any other country) for use in government hospitals and similar institutions, without seeking a license from Gilead. So far no government in India is known to have invoked the Act for importing any drug though – if it does so to import Remdesivir, that would be a first!

Could import be a faster solution?

Although the Indian manufacturers of Remdesivir have indicated that they are scaling up its production, it may take some time for fresh stock to hit the market. The grant of a compulsory license (as been urged by some – see here, here, here and here) could also help increase the supply further, but it will again take time for the new manufacturers to produce and bring the product to the market. Therefore, if sufficient quantities of the drug are available in Bangladesh for immediate export, its import into India may be a faster way to ease the current shortage in the country. Although the larger question on Remdesivir’s effectiveness and use in treatment of Covid-19 still remains open.

[Update (19/04/21): Yesterday, Jharkhand’s Chief Minister tweeted that they are planning to import 50,000 vials of a generic version of Remdesivir from Beximco Pharma in Bangladesh to address the shortage of the drug in the state. He has sought permission from the Central Ministry of Chemicals and Fertilizers to do so. However, it is not clear why such permission is required. In my knowledge, all that’s required is an import license from the CDSCO (Central Drugs Standard Control Organisation). Once that’s in place, the State Government can import the drug for distribution in public hospitals and similar medical institutions without requiring any authorisation of the Central Government, as empowered under section 47(4) of the Patents Act. Also, the Maharashtra Government had written to the Centre last week urging them to grant a compulsory license for the drug under section 92 of the Act. It has also granted approval to two companies (which were exporting the drug) for supplying it locally within the state, but these companies do not have a license from Gilead to do so. In the absence of any action from the Central Government, Maharashtra Government could also consider importing the drug from Bangladesh as it planned to do last year. Although, unfortunately, that may also not help tackle the shortage immediately as Beximco Pharma has indicated that it doesn’t have large quantities of the drug in stock and it would take them some time to supply the drug.