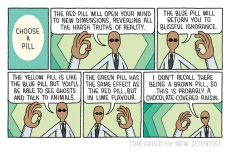 This is not how our public policy works…. hopefully! Image from here

On 11th May, it was reported that Kerala High Court has sought a response from the Central government on a PIL seeking direction to the government to invoke the compulsory license (CL) provisions for the COVID-19 vaccines. In the PIL, the Petitioner (Adv. Gopakumar GV) argues that in the present crisis resorting to CL will assist the nation to ramp up the quantity of vaccine output and thus overcome its scarcity. As reported before, the government is already facing a Gatling gun of questions on its stance pertaining to CLs and opinions seem to be divided on the effectiveness of the mechanism in assuring access to vaccines and other treatments in the pandemic.

However, a CL could be granted under sections 84 and 92 of the Patents Act only when the invention is patented in the first place. Therefore, the million-dollar question (quite literally) remains:-

Are there any patents on the vaccines yet?

To simply answer this question- No, there is no patent granted on the COVID-19 vaccines yet (as explained by Prashant in this session and also stated in the petition). But alas things are not quite simple. It has been reported that despite having no patent on any of COVID-19 vaccines, many vaccines are still protected owing to patents on their underlying technology. For instance- internationally:-

Things are not different in India too where the tech behind Astrazeneca vaccine (Covishield) is protected under Patent no. 318021 see (pdf) (for- adenovirus vector comprising capsid derived from chimpanzee adenovirus AdY25)  and Patent no. 263933 see (pdf) (for- immunogenic composition or vaccine with simian adenovirus vector). The owner of this tech is ISIS Innovation Limited- Oxford University’s technology and research commercialization company, which has now been renamed to Oxford Union Innovation. Apart from these 2 registered patents, there are at least 2 applications pending under the name of Oxford University Innovation Limited for (Application no. 201817047327; filed on 14.12.18) (pdf)  and (Application no. 202147007710; filed on 24.02.21) (pdf). With regard to IP on Covaxin- after a thorough public search on ipindia.com, I could not find any applications by ICMR or Bharat Biotech on the vaccine yet. (The last application that I could find by Bharat Biotech concerns the Zika virus vaccine – see pdf here) However, it has been reported that Bharat Biotech and ICMR have been sharing the IP behind the vaccine and have agreed to divide the royalties generated – see also Anupriya’s recent post.

Therefore, despite not being protected by patents themselves, the vaccines still enjoy some sort of exclusivity from the patent protection accorded to the technology behind it. This brings me to my next question-

CLs are suggested as means to ramp up outputs. Assuming that the government is satisfied that owing to the present pandemic it is necessary to grant CLs on the patents relating to the technology underlying the vaccines, it could issue a notification under Section 92(1) for CL and then the interested parties may apply before the Controller for such a license. Issuing CLs to the interested parties on these patents would help remove the existing patent barriers to the manufacture of more vaccines in the country. Further, even if the Government cannot grant CLs for the Covid-19 vaccines yet as there are currently no “patents in force” on them, it can invoke Section 100 of the Act to authorize any person to manufacture these vaccines for the purposes of the Government if patent applications have been filed for them. It is unclear though if any application has been filed for these vaccines yet. The Government can, however, authorize the use of the technology behind the vaccines in respect of which patent applications have been filed. For using the flexibility under Section 100, there is no need for a patent to be registered. Rather, the Central government can use it anytime after an application for a patent has been filed with the Patent Office. Prashant had earlier highlighted this alternative among other provisions of the Patents Act to ensure that a stockpile of essential medicines and medical devices are available for prompt disposal in the pandemic.

In practice though, it seems slightly improbable that CLs or government use of the invention alone will do the trick to increase the output of COVID-19 vaccines for the reasons discussed below.

As Chris Garrison has succinctly explained here, there is an ‘IP Stack’ which causes hindrance to accessibility. This stack contains three types of protection:-

Via CL, the generic manufacturers can only overcome the patent barrier and use the information disclosed by the patentee to the Patent Office in exchange for the patent monopoly. There are other substantial bits of information that remain undisclosed and to which the generic manufacturer will remain oblivious despite getting a CL for the invention. But then many of us may ask, isn’t the entire purpose of granting a 20-year patent monopoly to bring to the public domain all the information that may be necessary for others to effectively manufacture the invention once the patent monopoly ends and thereby benefit the public? Under TRIPS, countries are bound to require the patentee to disclose only the sufficient (which may not be the best way) to carry out the invention. Therefore, while countries like India (see section 10(4)(b) of Patents Act) and the US require best mode disclosure (Section 112 US Patents Act,  see page 412), Europe requires only sufficient disclosure. Even where the patentee is required to disclose the best way, the disclosure may still be lacking (see pages 3-5; also see here, here ) some information required to carry out the invention in an effective and commercially viable way (for instance, because it is required to disclose the best way known on the date of filing only and so it can keep secret the information on a better way that they may find over time). Considering that disclosure is the cornerstone of the patent bargain, it is upsetting to see how little has been done to ensure that the disclosure is meaningful.

Description: Disclosed and undisclosed information. Each bar represents the total information required to carry out the invention in an effective and commercially viable way at some point during the lifetime of the patent. The white and grey fractions notionally represent the portions of the information that have had to be disclosed (made public) by the patent owner and those which have not (kept secret). See Source

Without falling prey to the western straw man arguments that the scientists in India do not understand science or produce substandard medicines etc, it is true that reverse engineering a biologic using just the disclosure made before the Patent Office does not necessarily yield a biosimilar. For example in the past, the Brazilian Patent Office sought to translate important patents of developed countries into Portuguese, as a way to encourage industry to circumvent the obligation to pay royalty and imitate these inventions. However, without access to other undisclosed information, this experiment proved to be a recipe for disaster as the products manufactured out of this exercise were something else altogether.

While CLs can be a fruitful alternative for reverse engineering molecule based drugs (like paracetamol, which apparently has a ceiling price unlike COVID-19 vaccines) or for accessing disclosures made before the Patent Office, it will fall short to ensure that complicated biologics like Covishield or Covaxin can successfully be reverse engineered to biosimilars in no time, unless there is also an eco-system in which such inventions can be worked, including skilled personnel, appropriate equipment, the required know-how, etc. As Prashant has pointed out here, it is necessary that focus shifts from IP to undisclosed information and tech transfer especially in the context of COVID-19 vaccines. This brings me to my third question-

How can the undisclosed information be accessed?

As explained by Anupriya, clinical trial data is relevant to evaluate the safety, quality, efficacy, risks and benefits of the drug along with its composition, including physical and chemical characteristics. TRIPS under Article 39.3 prescribes for protection of clinical trial data which can be disclosed when it is ‘necessary to protect the public’. However, Prof. Basheer in his paper has pointed out that there are no express provisions within any Indian laws that prevent disclosure of the test data results to any third party. An elaborate discussion on this is done by Amit Singh and Pramita Dasgupta here.

Leaving the patent disclosure and clinical trials data aside, the third piece of the puzzle is to access trade secrets. Trade secrets refer to information that can range from technical designs and specifications to instruction manuals, process controls etc. While India doesn’t have a specific law for trade secrets, they can be protected (paywalled) under the Indian Contracts Act and Common Law Principle of Equity. Unlike the above two sets of information, trade secrets are not disclosed before any authority. Therefore, to access trade secrets, voluntary cooperation with its holder is required. In such a situation, if measures like CL or disclosure of clinical trials are resorted to, then there is a probability that the holder of a trade secret might end up protecting the information in a much more aggressive manner. Owing to the above reason, CLs may not be sufficient to ensure access to vaccines. In the same vein, organizations like IDMA and OPPI have suggested that waiving patents alone won’t be sufficient for improving the output of vaccines.

The government has recently come out (sorta) on its rationale for the nonuse of flexibilities under the Patents Act. In the affidavit filed before the Supreme Court, the government preferred to get into voluntary negotiations with the drug manufacturers instead of resorting to any TRIPS compliant flexibility under the Patent Act. While it is understandable that undisclosed information behind Covishield might require cooperation on part of Astrazeneca, it is startling to see the Centre’s opacity over Covaxin esp now when it is out in the open now that the government is one of the IP owners of Covaxin. Anupriya in her three-part post (here, here, and here) wrote on this issue and suggested that the government must make it available to the public. Similar requests of tech transfer have been made by various Chief Ministers recently (see here and here).

Seemingly the government has paid heed to these requests and has announced its plans to ramp up production of Covaxin by roping in 3 PSUs (Haffkine Biopharmaceutical Corporation Ltd, Mumbai, Indian Immunologicals Ltd, Hyderabad and Biologicals Limited (BIBCOL), Bulandshahr) under  “Mission Covid Suraksha”. It has further been reported that Bharat Biotech will share the Covaxin “formula” with the interested manufacturers, which comes after ICMR said something similar a few days back. An official announcement is yet to be made in this regard. The bigger issue is all of this planning could have and should have happened one year ago, not only after a deadly 2nd wave. India is supposed to be one of the most capable vaccine manufacturers and arranging sufficient quantities shouldn’t have been an issue with a bit of foresight and planning. Sure, India did bet on Novavax (see here, here (paywalled)). However, it should have realized that betting all the monies on one horse in a pandemic might only take the jockey this far.

Thanks to Pankhuri and Swaraj for their valuable inputs!