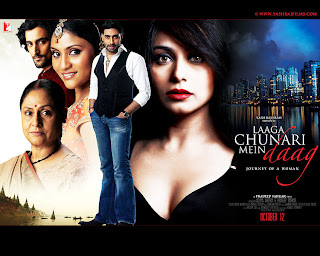 When I visited one of my friends recently in London, I found that he was deeply engrossed in a bollywood flick titled “Laaga Chunri Mein Daag“. The femme fatale, Rani Mukherjee (my reason for suffering the movie) plays the role of a high class hooker. She finally meets her hero (Abhishek Bachan)—and lo and behold, he turns out to be a world famous patent attorney from India!! And one scene even has him speak at a world patent and trademark conference in Bern, Switzerland.

A beaming smile shot across my face: Bollywood finally recognizes our lot and casts us in the role of a hero. No doubt, it only thinks us worthy of hookers—but then Rani, our femme fatale is no ordinary hooker—she is a high class one. Given that that we are in the same company as Spitzer, that can’t be such a bad thing …..!!

The best is yet to come….

Our hero asks Rani what she thought of patents. Pat comes the reply: it is a tool used by the West to exploit India and other poor nations!!

Bravo—our media has indeed done its job well. With patents hitting front pages with increasing regularity and being painted in a satanic light, is this all that surprising??

Hats off to bollywood though–Not only does it capture what patents mean in the popular media, but also successfully establishes a causal nexus between prostitution and patents (something I have always suspected)…..