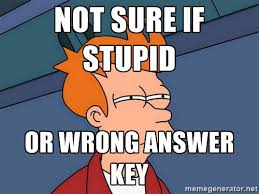 We are happy to bring to you a guest post by Dinesh Parmar, who works with Parker & Parker Co. LLP and is one of the candidates who wrote the Patent Agent Exam 2016. In a recent post, we had brought to light the controversy surrounding the credibility of the viva scores awarded to the candidates of this exam and urged those aggrieved to challenge the constitutionality of the viva exam requirement in the court. In this post, Dinesh takes issue with the Answer Key recently published by the Patent Office and points out that answers to two of the Paper-I Set C questions stated therein are incorrect. He argues that marks should be awarded to the candidates who selected correct answers to these questions, which may help some of them clear the exam.

Patent Office has published the Answers Key of Paper-I Set C of the Patent Agent Examination 2016 here. Upon verifying, I have found that there are two questions whose answers provided by Patent Office are NOT correct. The first one is as follows:

c. Can file an application for patent in a foreign country only after filing a PCT application on same Subject matter.

d. None of the above  (Patent Office’s Answer)

Section 39: Residents not to apply for patents outside India without prior permission. –

(1) No person resident in India shall, except under the authority of a written permit sought in the manner prescribed and granted by or on behalf of the Controller, make or cause to be made any application outside India for the grant of a patent for an invention unless–

(a) an application for a patent for the same invention has been made in India, not less than six        weeks before the application outside India; and

(b) either no direction has been given under sub-section (1) of section 35 in relation to the                application in India, or all such directions have been revoked.

The answer to Q. 27 should be option ‘b’ in light of the words “except under the authority of a written permit sought in the manner prescribed and granted by or on behalf of the Controller” in Section 39(1). The question seeks to ask if and when an Indian resident can file a foreign application without first filing an application for the same invention in India and Section 39(1) makes it clear that such application can be filed in cases where written permit has been granted by or on behalf of the Controller. This, in my opinion, qualifies as a special circumstance and thus the correct answer to Q. 27 is option ‘b’ and not option ‘d’ as stated in IPO’s official answer key.

Further, Q. 27 was asked in Patent Agent Exam 2010 as Q. 8 in Part A of Paper 1. Answer to the said question has been provided by two books: Patent Agent Examination by Sheetal Chopra – Registered Patent Agent, M.Sc, MBA and Dr. Akash Taneja – M.Sc, MBA, PG Diploma in IPR Law, Master Diploma in IP, Ph.D. and other one by Nitin Sharma – BE, MBA and LLB. Both of these books are very popular and known among IP professionals. In both books, the answer to Q. 8 is mentioned as option ‘B’ (PAE Book by Sheetal Chopra and Dr. Akash Taneja at Page 249 and PAE Book by Nitin Sharma at Page 241). Nitin Sharma has also provided explanation why the correct answer must be option ‘B’.

The second question is as follows:

Q.49:  X decides to oppose the amendment after grant to the description of a Patent obtained by his rival Y. The options before him is:

Here, the Patent Office’s answer ‘b,c’ is incorrect as there is no provision to apply for compulsory license while opposition to amendments has been filed. X can simply file Form-14 to oppose amendments in description and upon completion of filing evidence and other formalities, X can request for hearing under Rule 62. So, the correct answer must be ‘b,d’ only.

I have already e-mailed these questions to the Controller General of Patents and they said that these questions and answers have been prepared by experts; however, they have forwarded my e-mail to review these answers. But NO timeline has been provided as to when they will reply to me about these issues.

Many candidates of the Patent Agent Exam 2016, have been declared failed due to the VIVA marks and INCORRECT answers of IPO. Some of them have failed by a margin of 1 to 5 marks (I got a total of 148 marks and a few candidates even got a total of 149 marks). If, we can prove that the answers of IPO to Q. 27 and Q. 49 are incorrect, a total of 5 marks (2 marks for Q.27 and 3 marks for Q.49) would be awarded to those candidates who have selected CORRECT answers to these questions, which may help some of them clear the exam.

Therefore, I request the IP professionals to share their views in this regard, so that we can communicate with the IPO accordingly. Your comments and opinions would be very helpful to many patent agent exam candidates.