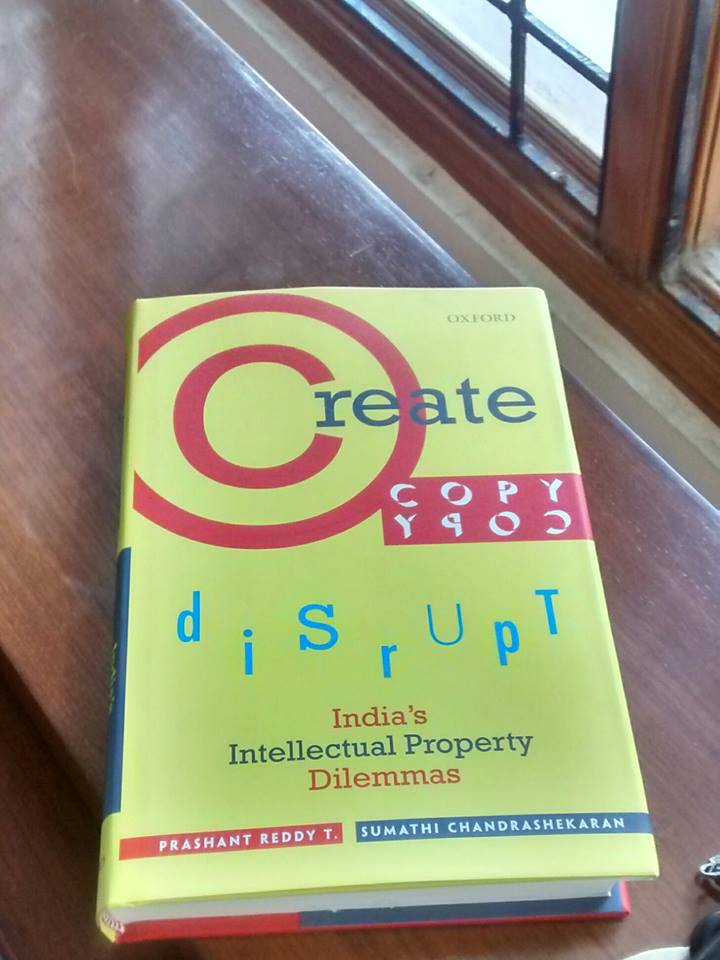 I’m happy to announce to our readers that the Oxford University Press has recently published a book on Indian IP that I have co-authored with Sumathi Chandrashekharan, who used to blog with us on SpicyIP and who is now with the Vidhi Centre for Legal Policy.

The book is titled Create, Copy Disrupt: India’s Intellectual Property Dilemmas and attempts to narrate the history and the politics surrounding India’s intellectual property policies since it declared independence from the British in 1947. You can (and I hope you do!) purchase the book on Amazon or from OUP’s website. It is also available in select book stores.

Why did we write this book?

Most of the literature on Indian IP caters to either IP academics or lawyers. But as we have discovered over the years while writing on SpicyIP and working on IP issues elsewhere, the interest in IP goes way beyond the circle of professional academics or IP lawyers. We’ve often been asked for recommendations by a non-specialist audience for books that could explain Indian IP law to a lay reader in jargon free language. We could never find such a book so we decided to write one ourselves. The focus of our effort has been to keep the language simple and jargon free – it turned to be a surprisingly difficult task to write in simple English without using legal jargon in every sentence. In the process of researching for this book, we came across a lot of very interesting material which we have incorporated into this book and which we suspect will be of interest to even the specialist IP academics and lawyers. Let me however also add that this book is not an exhaustive account – we only covered areas that interested us the most. We aim for the book to be an introduction to readers interested in the subject of IP in India.

We have several people to thank for this book getting published. While the book itself has a detailed list of acknowledgments, we would like to mention a few over here. Top of the list is of course Shamnad. He brainstormed with us on the outline of the book, reviewed some chapters for us and wrote us a generous foreword for the book. A close second on the list, is Aparajita Lath, who was then a student at NUJS and now a lawyer with AZB & Partners, Bangalore. She did a fantastic job researching for us, reviewing chapters and pulling out material from different libraries. A big thank you to Sai Vinod Nayani for being our RTI lawyer and getting out some important material for us from the Parliamentary library through RTIs. We would also like to thank some of the bureaucrats, who in their role as Public Information Officers responded to our RTI queries and provided us with very helpful information. In particular we would like to thank Ms. Chandini Raina (DIPP), Mr. S.K. Lal (DIPP), Mr. G.R. Raghavender (former Registrar, Copyrights) and several others in the support staff who arranged for photocopies and were very helpful as we occupied their offices while inspecting the necessary files.

We would like to thank the anonymous reviewers for their sharp observations and the editors at the Oxford University Press for their terrific editing. Also, especially, since a lot of people really liked the cover design of our book we would like to thank Manoj Nath for translating our ideas so effectively into the final design.

Last but not the least, we would like to thank our long time SpicyIP readers who have commented, praised and criticized  several of our posts on issues that have made their made into the book.

The outline of the book

Our book can be divided into three sections.

The first four chapters deal with the evolution of India’s pharmaceutical patent policy through the 22 years (1948-70) it took for India to abolish pharmaceutical patents till the negotiation and enforcement of TRIPS (1986-2013) along with its consequences. A lot of the broad details will be familiar to most of you but we’ve managed to add some very interesting historical material and analysis. For example, during the efforts in the sixties to rewrite Indian patent law, although there was a broad consensus to abolish pharmaceutical product patents, the one political party which fiercely opposed this move and this was the Swatantara Party – perhaps the only party in that era which supported free market economics. On the other end of the spectrum were the communists, a remarkably potent force in Indian politics at the time.

Another interesting fact that we discovered was that Ayyangar’s patent report, which all of us praise today, actually came under scathing criticism from some quarters in the sixties on the grounds that it hadn’t done enough to abolish even process patents. The fear at the time as explained to a Parliamentary committee by Dr. K.A. Hameid who founded Cipla, was that some foreign companies were patenting all known processes to manufacture pharmaceuticals and chemical thereby creating a thicket around the ultimate product.

The next four chapters deal with India’s approach to copyright law in four sectors: book publishing, music, movies and finally the debate over the ‘safe harbour’ provision in Indian copyright law. Indian copyright law has some of the most fascinating history but unfortunately it is not narrated to a larger audience. The tale of how India almost shook the foundations of the Berne Convention for the Protection of Literary and Artistic Works in 1967 is a story that is worthy of its own book. A few foreign authors like Ricketson and others have covered India’s role in their works on the Berne Convention. We however managed to get access to a lot more Indian sources which provide the Indian perspective on these issues.

The last three chapters deal with IP and its interactions with religion, traditional knowledge and basmati. The chapter ‘Of Gods & Gurus’ is an account of how Indian IP law intersects with both religion and the businesses of god-men. India is one of the few countries with a provision in its trade mark law that specifically prohibits the registration of trademarks that could offend religious sensibilities and it’s very interesting to analyse the manner in which the Trade Mark Registry interprets the provision. Similarly on the issue of god men, you will be surprised to discover that IP is one of the most valuable assets in the vaults of god men. Where there is IP, there will be a dispute and we narrate a few of these stories from around the world.

One of the challenges that we faced while writing this book was accessing primary source material on Indian IP such as older versions of the statutes, parliamentary debates and reports. So we decided to put together some of the research material that we discovered during the course of research and put it together in the form of an e-book which can be freely downloaded by anybody. This particular compilation deals with only Indian copyright law and consists of three volumes spanning the period 1952 till 1999. The quality of some of the documents in this compilation are really poor and if our readers have better copies please do share with us and we will update this compilation.

Please note that Volume 3 is 146 MB and can only be downloaded – you will not be able to preview it on Google Drive.

The first volume consists of different versions of the Copyright Act, 1957 starting with the Copyright Bill, 1955. We’ve made it a point to make available each version of the law in the format that it was introduced in Parliament as a Bill and also as enacted by Parliament. This includes all the amendments introduced since 1983. Merely comparing the version as introduced and version as enacted can be an educational experience. Some of the older versions deserve to be read just for their drafting – for example the notes and clauses on the Copyright Bill, 1955 are a delight to read when compared to the bland versions that are put out by the government these days.

The second volume consists of delegated legislation such as the Copyright Rules, 1958 and International Copyright Orders.

The third volume (146 MB) consists of almost all the Parliamentary debates on the issue of Indian copyright law. This includes some classic debates from the fifties on the Copyright Bill, 1955, the decision to ratify the Berne Convention and the Universal Copyright Convention. While the Rajya Sabha debates are digitised and easily available, the older Lok Sabha debates are not digitised and we had to manually source the debates, so we can’t really guarantee that we have all the Lok Sabha debates.

We hope this material makes it easier for IP academics and lawyers to write and debate the history and politics of Indian copyright law. God knows we need a lot more analysis on these issues!

We are hoping to repeat this exercise for even trademark law and patent law and we can really do with some help from people who have the time (or interns) to source material from public libraries.

Editor’s note: The book is available for order online on Amazon. It can also be found in our list of IP books (also accessible from the Library section on the home page of our website or the Resources section of the website here).

SpicyIP is a participant in the Amazon Associates Program, an affiliate advertising program designed to provide a means for sites to earn advertising fees by advertising and linking to amazon.in.