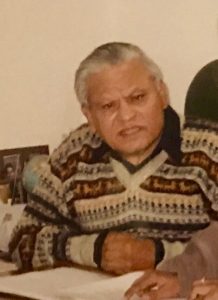 As many of our readers may already know, Mr. Shanti Kumar, a leading patent and design expert and former Joint Controller of Patents and Designs, passed away early last week. We would like to bring to our readers a moving tribute to him written by Ms. Jaya Bhatnagar, Founder & Chairperson, SiebenIP. Jaya is one of the leading design lawyers in the country. She worked extensively with  Mr. Shanti Kumar at Anand & Anand.

A Tribute to Mr. Shanti Kumar

The Indian IP fraternity lost one of its most knowledgeable patent and design experts on 18th July with the demise of Mr. Shanti Kumar.

Shanti Kumarji had a vibrant career where he made a significant impact in the Indian patent and design field as the Joint Controller of Patents and Designs at the Indian Patent Office and as a director in the Department of Scientific and Industrial Research, Ministry of Science and Technology. He joined Anand and Anand in 1992 and played a pivotal role in shaping the firm’s patent and designs department, following which, he joined Lex Orbis in 2008 as the head of its patent department.

In my 20 years of association with him, I have never met a man as dedicated and passionate about patents as him. He had an unmatched zeal to learn the patent law and painted the entire canvas of his life with patents. Workaholic by nature, he very often said, “If you cut me, you will see only patents flowing through my blood stream”. He envisioned achieving an Indian patent system in tune with the global standards by not only revising the laws, but in all practicalities.

Even post his retirement from work, his conversations with me would always entail discussions on the latest developments in patent law and the Indian IP regime. He had a deep understanding of the law which is evident from the valuable decisions given by him during his term as the Joint Controller of Patents and Designs as well as the numerous articles published by him.

Shanti Kumarji was a repository of knowledge and yet will always be fondly remembered for his humble ways, especially for his famous dialogues: “Main patent law ka ‘P’ bhi nahi jaanta” or “If this entire table is patent law, I only know this corner of it”. His ability to recite sections of the Indian Patent Act and the Design Act without referring to any books even in his early 80s always left me in admiration.

Those who have worked under his guidance would agree that he was an inspirational mentor who played a key role in building the careers of many by giving young minds the right opportunities and teaching them the law with great enthusiasm, albeit the regular and much-needed scoldings. It was an honour to have had the opportunity to learn from one of the greatest teachers whose lessons were not limited to books but involved those on life as well.

It is nearly impossible to bid goodbye to you, Sir. I am sure wherever you are, your passion for patents continues to live with you.