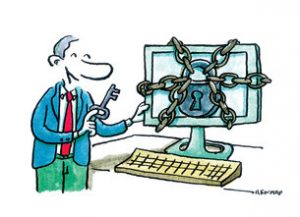 In B.N. Firos v State of Kerala and Ors., the Supreme Court of India, on March 27, held that only those ‘computer systems’ may be designated as protected system under the Information Technology Act, which qualify as ‘Government Works’ under the Copyright Act.

The present dispute related to the ownership of copyright in software which was being used by the Government of Kerala for a project known as FRIENDS (Fast, Reliable Instant, Efficient, Network for Disbursement of Services). The present appellant had created the software for a pilot project of the Government, under contract and for consideration, for Microsoft Inc, which was then granted the contract for implementing the software across multiple districts in Kerala, which responsibility was devolved to the present appellant.

As Microsoft attempted to displace the Appellant in his responsibility in implementing the software, the appellant claimed that his copyright has been violated, and sought to get his copyright registered. Microsoft responded by instituting civil and criminal proceedings which stalled the registration proceedings.

(1) The appropriate Government may, by notification in the Official Gazette, declare that any computer, computer system or computer network to be a protected system.

(2) The appropriate Government may, by order in writing, authorise the persons who are authorised to access protected systems notified under sub-section (1).

(3) Any person who secures access or attempts to secure access to a protected system in contravention of the provisions of this section shall be punished with imprisonment of either description for a term which may extend to ten years and shall also be liable to fine.”

Grounds of Contention and the Decision

The High Court dismissed the challenge to the constitutionality of Section 70(1). The Court held that the Copyright Act and the IT Act had to be read harmoniously, and that the implication of such a reading was that only those works in which the Government could claim copyright would be affected under Section 70.

Section 17 of the Copyright defines the first owner of copyright. In the case of any literary work, including software, the author is generally the first owner, unless the work has been made ‘in the course of the author’s employment under a contract of service or apprenticeship’, in which case the employer would be the first owner, as per Section 17(c).

Further, under Section 17(d), the Government is the first owner of all Government Works, which are defined under Section 2(k) as “work which is made or published by or under the direction or control of —

(ii) any Legislature in India; or

(iii) any court, tribunal or other judicial authority in India”

The High Court therefore held that there was no conflict between the Copyright Act and the IT Act, as only that software of which the Government owns the copyright could be the subject of a notification under Section 70(1). The question of whether the Government was, in fact, the first owner in the present case would have to be decided in trial.

The Supreme Court upheld the reasoning of the Kerala High Court, stating that “if Section 70 of the I.T. Act has to be read in conjunction with Section 2(k) and Section 17 of the Copyright Act 1957 the rigours that would control the operation of Section 70(1) of the I.T. Act are clearly manifested.”

Further, the Supreme Court held that ex facie, the first owner of the Copyright in this case appeared to be Microsoft, as the appellant had created the software for consideration under a contract. Therefore, the appellant did not have any locus to challenge the notification of a protected system. The Supreme Court therefore, declined to interfere with the division bench’s judgement.

The Court however, declined to establish whether the Government was, in fact, the assigned owner of the FRIENDS software, which would be required to uphold the challenged notification under Section 70(1), as per its own reasoning.

The Supreme Court’s judgement fails to address some crucial issues –

Firstly, the Court did not adequately address the issue of the confusing language used under Section 81 of the IT act, which states that –

“S. 81. Act to have overriding effect. — The provisions of this Act shall have effect notwithstanding anything inconsistent therewith contained in any other law for the time being in force.

Provided that nothing contained in this Act shall restrict any person from exercising any right conferred under the Copyright Act, 14 of 1957 or the Patents Act, 39 of 1970.”

The proviso to Section 81 has created ambiguity in the construction of the IT Act vis a vis the Copyright Act in the past, which we have written about here. This was a missed opportunity to clarify the scope of this provision.

Secondly, holding that Section 70(1) of the IT Act is constrained by the Copyright Act would have implications for India’s cyber security and critical infrastructure. Section 70 allows the Government to control and restrict access to computer systems or software which it deems are important in the functioning of its critical information infrastructure. If such restriction is limited to only Government Works under the Copyright Act, the Government will be unable to restrict or control access to proprietary software which is (unfortunately) currently applies across a range of essential software, including, importantly, the software for the Central Identities Data Repository, perhaps the most sensitive information database in the country.