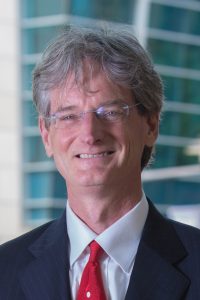 We’re pleased to bring you an unconventional post. A hilarious hard hitting letter penned by Prof. Glynn S. Lunney, Jr. to the US Supreme Court, taking issue with the uncertainty unleashed thanks to the doctrine of equivalents, as elucidated in Festo Corp. v. Shoketsu Kinzoku Kogyo Kabushiki Co. This letter is likely to resonate with many of us who’ve been at the receiving end of court decisions that may be difficult to understand, much less teach.

Professor Lunney is an internationally recognized scholar and holds a joint appointment at the School of Law and the College of Engineering at Texas A&M University.  He has an engineering degree from Texas A&M, a law degree from Stanford, and a Ph.D. in economics from Tulane. He is the author of a casebook, Trademarks and Unfair Competition (West 2d Ed. 2015), a book on copyright and music, Copyright’s Excess: Music and Money in the U.S. Recording Industry (Cambridge U. Press 2018), and numerous law review articles.

I taught your Festo decision on the doctrine of equivalents yesterday.  While I welcome your return to patent law, I have a complaint.  I understand that patent law is complex, complicated, and sometimes nearly nonsensical.  It can be very tempting as a result to listen to those very insistent voices in our head and offer a new grand unified theory to explain some doctrine in, or aspect of, patent law that is troubling.  Otherwise, you might have to review a nearly uncountable number of earlier cases in order to understand why patent law is the way it is.  To take the doctrine of equivalents as an example, you might have to read four or five Court decisions to understand the historical roots and traditional justifications for the doctrine. That’s a lot to ask given how busy you are.  Nevertheless, I would ask that before you tie some central doctrine of patent law to your newly discovered pet theory that you at least test your pet theory against the facts in the case before you.

In Festo, for example, you insist that we need a doctrine of equivalents because language can be inadequate to describe new technology. Often, the words just don’t exist, you tell us.  As pet theories go, I can see where someone with a background in literary theory might like that one.  Unfortunately, it just doesn’t work.  How am I to tell my students that, while the patentee could say “two single-lipped sealing rings,” the words “single dual-lipped sealing ring” just didn’t exist back then? Or that while a patentee could include the phrase “at a pH of 6 to 9,” the words simply weren’t available to say “at a pH of 5 to 10”? If there were even a single Court decision on the doctrine of equivalents where the words just didn’t exist, I could at least teach your pet theory without too much overt ridicule. Unfortunately, in more than one hundred fifty years of Court case law on the issue, there’s not.

As a result, I’m forced to explain that we have to follow your rules on the doctrine of equivalents not because they are well-reasoned, sensible, or otherwise just. Rather, we have to follow your rules on this issue for the same reason we had to put down our toys and come to dinner when our parents called us: Because I said so. And that’s just so hard on my students.

They’re so young and idealistic, you see. (Some might say naïve, but not me.) They truly believe that you are a source of wisdom and justice. When I teach them Festo, I can see the light of that belief start to fade from their eyes. If they choose to practice patent law, they will become cynical soon enough.  Help me preserve their faith in the legal system just a little longer.

P.S. This letter was sent by Prof. Lunney to the IPProfs mailing list and has been reproduced here with his permission.