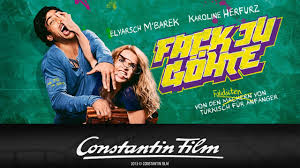 We’re pleased to bring to you a guest post by our fellowship applicant, Adyasha Samal. Adyasha is a 4th year student at Hidayatullah National Law University, Raipur. This is her first submission for the Fellowship.

In this post, she explores issues relating to morality based prohibitions in trademark law in light of the Court of Justice of the European Union’s decision permitting the registration of the ‘Fack Ju Göhte’ mark earlier this year. We’ve had several posts on the issue of IP and morality on the blog before, including those by Justice Gautam Patel (‘Content Legitimacy and Copyright: Guest Post by Justice G. Patel‘) and Prof. Basheer (‘Sexual Pleasure is Immoral: So Says the Indian Patent Office!).

From Iancu v. Brunetti to Constantin Film: Should Morality Interfere with Trademark law?

In February this year, in the case of Constantin Film Produktion v. EUIPO (“Constantin Film”), the Court of Justice of the European Union (“CJEU”) permitted the registration of the ‘Fack Ju Göhte’ mark, which had been rejected on grounds of morality under EU law. CJEU’s multidimensional approach to applying the morality provision to trademarks addresses issues similar to those identified by the US Supreme Court in Iancu v. Brunetti (“Brunetti”), which dealt with a similar-sounding trademark. These developments have raised concerns regarding the utility of morality-based prohibitions in trademark law.

In 2015, the appellant had sought to register an EUTM for the sign Fack Ju Göhte, which is the name of its successful German comedy film that has been followed up with two sequels of the same name. The EUIPO had rejected the application as it contains a German reiteration of the popular English expletive ‘F**k you,’ which it deemed to be ‘contrary to accepted principles of morality’, as per Article 7(1)(f) of EU Regulation No 207/2009. After successive appeals, the General Court had upheld the rejection, finding the trademark ‘intrinsically vulgar’, owing to its sexual connotations.

Before the CJEU, the appellant argued that the General Court did not examine the sign, ‘Fack Ju Göhte’, but its English translation, ‘Fuck you, Goethe’. Further, it examined the sign broadly and in abstract terms, relying on personal tastes rather than objective assessment through empirical evidence of the general public’s perception. It also claimed that the expression ‘Fuck you’ and its equivalents had lost their vulgar implications and evolved into expressions of anger and contempt. EUIPO contended that the expression remains inherently vulgar and the trademark in question ‘manifestly obscene.’ It also submitted that purpose of trademark rights is to ensure undistorted competition and not freedom of expression.

CJEU observed that the prohibition in Article 7(1)(f) aims to safeguard the ‘fundamental moral values and standards to which a society adheres at a given time.’ These values are likely to evolve with time. This necessitates an objective inquiry from a reasonable person’s standard of sensitivity into all elements specific to the case, so as to understand public perception of the trademark. Having established that, it considered several factors – the humourous context in which the expression is used, the resounding success of the film viewed by almost 7.4 million spectators across Germany, the uncontroversial reception of the title followed by its use for educational purposes by Goethe Institute which is tasked with promotion of German language worldwide. It also referred to Article 11 of the Charter of Fundamental Rights of the European Union, acknowledging the responsibility to apply the law in such a manner as to ensure complete respect for the fundamental freedom of expression. Relying on this examination, it ruled that the trademark did not offend the moral principles of the German public at large.

Across the Atlantic, the US Supreme Court in Brunetti had previously struck down the morality-based prohibition in Section 2(a) of the Lanham Act for allowing viewpoint discrimination which offends First Amendment’s free speech threshold. This has been discussed in the blog here. These decisions reflect a trend towards dilution of morality-based prohibitions in trademark law when weighed against free speech thresholds. Although green-signaling Fack Ju Göhte by relying on the changing perceptions towards sexually-loaded expletives is practical and progressive, to what extent free speech should safeguard morally questionable trademarks is a matter requiring deliberation.

Other than sexually-charged trademarks, the past decades have seen use of trademarks such as ‘Paki,’ ‘Redskins,’ ‘Black Tail,’ and the (Nazi) Swastika. Attempts to register tragedy-inspired trademarks like ‘MH370,’ ‘MH17,’ and Coronavirus have also been made (discussed in the blog here and here). Marks like these represent disparaging, racist and sexist notions and embody the most despicable elements of society. Professors Phillips and Farley demonstrate how racially charged trademarks cause tangible psychological damage as they influence, shape and comment upon social identities, promoting stereotypes and discrimination.

It has been suggested that like in case of sub-standard products, market forces themselves should determine the fate of objectionable marks. If the public perceives a mark as scandalous, they will abandon the product and eliminate it from the market without government intervention. However, it is likely that such marks may still win customers through their ‘shock value’ or out of sheer consumer-ignorance. Commercial success does not make these marks acceptable. On the other hand, as pointed out by Professor Farley, affording legal protection to them indicates government approval of the beliefs they perpetuate, which is harmful for the society.

Another concern is that withholding registration of offensive marks is pointless as it will not prevent their use in branding. This is not entirely true, as registration provides legal protection and economic incentive to trademarks. Rejection reduces incentive to invest in the brand as it remains vulnerable to imitations. Moreover, regardless of subsequent use, the government has a responsibility to discourage marks that outrage the core moral values of modern society. In an insightful post, Harshavardhan Ganesan highlights the lack of awareness in India about the Holocaust and the ill-informed perceptions of Hitler in Indian society. He suggests that the Trademark office must also take up the task of educating people as to the cause of rejection of trademarks.

Does a bar on marks deemed immoral curtail free speech? Though denial of registration does not prevent commercial use of the mark, it may be argued that withholding legal protection creates a chilling effect on freedom of speech as there remains little economic incentive in using the mark. The solution to this lies in crafting a well-defined, narrowly-applicable law. The principles of morality must be confined to the most fundamental set of values that form the fabric of the society. While assessing trademarks, contextual factors must be given due consideration and only those marks must be turned down which are outrageously offensive and reinforce hateful stereotypes and misinformation. A balance must be achieved by treating trademarks as instruments of commercial expression and avoiding callous rejection of marks on grounds of distaste. While Brunetti has left things in a precarious position by removing all restriction on objectionable marks in US, Constantin Film sets a good precedent for EU by narrowing ‘accepted principles of morality’ to those morals and values which are fundamental to the society.

In India, Section 9(2)(c) of Indian Trade Marks Act, 1999 prohibiting marks containing ‘scandalous or obscene matter’ targets marks likely to offend ‘accepted principles of morality’ (according to the Draft Manual of Trademarks). This is unlikely to be struck down because restrictions on free speech on grounds of decency or morality are permissible under Article 19(2) of the Constitution. However, while Brunetti and Constantin Film expressly hold that freedom of expression permeates trademark law, Section 9(2)(c) remains untested in court. Though commercial speech stands protected under Article 19, Indian courts are yet to grapple with the question of whether trademarks constitute speech at all.

In my opinion, such a conception remains in line with the Supreme Court’s decision in Tata Press v. MTNL, which held that advertisements ought to be protected as commercial speech because they play the crucial role of passing information to consumers in the economy and enable them to make an informed choice. Like advertisements, trademarks by performing the twin functions of source-indication and quality-assurance, transmit commercial information that facilitates consumer choice. Thus, Indian law should acknowledge trademarks as means of commercial expression and extend protection under Article 19(1), so far as they do not breach pre-determined thresholds of morality and send dangerous social messages.