Back in 1970, Justice Stephen Breyer, (now of the US Supreme Court, then a professor at Harvard Law School), in contemplating the proposals to extend copyright terms, wrote an interesting article where he pointed out that the Copyright regime seemed to be based more on fear, than on fact (paywalled link). His conclusion regarding the copyright system, ended up echoing what the economist Fritz Machlup had famously said even earlier, in 1958, about the patent system – that if we didn’t have a [copyright/patent] system already, there wasn’t enough evidence to justify creating one (in Breyer’s case – expanding copyright further); but given that we do currently have copyright/patent system, there wasn’t enough evidence to justify doing away with it either.

While it turns out that 62 years later, the evidence conundrum still exists, the IP system is, by and large, assumed to be a proxy for innovation. And as countless authors have written, especially vis-a-vis public health and medical technologies, this is a very problematic yet strongly prevailing assumption. While the faulty proxy is problematic on its own, it appears that there is another side effect that this proxy brings – one that seems to be related to the concept of technology-solutionism. 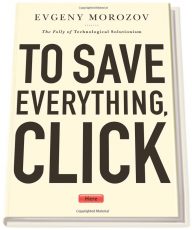 If only it were this easy! Book available here

Leaving aside the mechanics of copyright or patents, they are inherently dependent on the market for their value. In fact, in the innovation-systems literature, the decentralised nature of society’s demands (as expressed on the market), are posited as one of the benefits of a market-based innovation-rewards system. Since this means that ‘the market’ can decide what is valuable, rather than a single player (i.e., government / prize fund) who would have to incur massive information costs in determining what society deems valuable. Leaving aside the problem of public goods like health not being able to express themselves on a market place (i.e., for e.g. poor patients cannot signal to pharma companies that they want to save their lives by spending money on treatment, because they don’t have money to spend (‘signal’) in the first place), this also implicitly puts forward the idea that market-based innovations are always a useful spend of society’s resources, because after all, it is what people are willing to spend money on. And either as a fall out of this, or due to other factors, there seems to be a very common understanding that solutions to all our problems will a) be technological, and b) incentivized through the market place. In short – it really seems that a market-centric innovation incentive system (of which Copyrights/Patents play a large role), is contributing to so many startups and companies trying to solve the world’s biggest problems through a new app or the latest greatest technology, rather than looking at the basics, and perhaps sometimes ‘profit-less’ solutions. Of course, this is not an ‘either/or’ situation – however, that also means not relegating one to the realm of the forgotten. To repeat an example I had mentioned recently (see this post for more details and context), “The ‘humble checklist’ (it is what it sounds like) was a simple non-proprietary public health intervention which resulted in highly reduced infection rates in US hospitals by stopping infections before they could happen, even as patent-incentives were instead driving heavy investments into creation of antibiotics for the same infection problem. Both may have their roles, but this shows the clear difference between focusing on maximising health benefits, and focusing on the market for health benefits.”

This thinking – focusing on technological solutions to the exclusion of other types – has permeated government levels as well – with several governments often eager to bring on ‘app’ based ‘solutions’, even while spending lower and lower amounts on crucial areas like public health. Those like Evgeny Morozov also point to the often insidious nature of this tech-solutionism.

Check our list of IP and related books here!

Given the nature of which portion of society tends to have access to capital and entrepreneurial networks – this has also frequently meant that there is very little diversity in background and life-perspective of those who end up being ‘incentivised’ by the formal IP system. About a decade ago, Shamnad had written a few pieces (such as this) on how the IP regime did not really cater to the ‘informal’ economy, despite the fact that the informal economy consists of the major part of India’s overall economy. Readers can find further discussion from the blog on grassroots innovation under the tag ‘grassroots innovation’ or specific posts like this and this. Aside from being grossly unfair, societally this is costing us. As Prof Anil Gupta famously quipped, “Minds on the margins are not marginal minds”. And whether we know it or not, we are losing out on countless brilliant minds by ignoring them, by only recognising ‘innovation’ when it comes through the formal, often elite, processes. For the past few decades, Prof Anil Gupta has been doing some amazing work bringing out grassroots innovations from across the country, through his teams at the National Innovation Foundation, and the HoneyBee Network and has been writing about his take on the present status of innovation/ creativity in India, in his blog (here).

There is another aspect to this though, perhaps best framed through the question Siva Vaidhyanathan posed some years ago – click here to read my post discussing that article – the question being: “Has Innovation supplanted the idea of Progress“? There, he argues that perhaps IP should not only consider “innovation”, but also progress – distinguishing between the two concepts. He goes on to say,

“Innovation differs from progress in many ways. Innovation lacks a normative claim of significant betterment. It emerges from many small moves rather than grand, top-down schemes. Innovation does not contain an implication of a grand path or a grand design of a knowable future. It makes no claim on the future, except that it always exists in that future, just out of reach of the now. And innovation always seems to come from the distributed commercial world rather than from grand, planned policies engineered from a strong central state. States are now encouraged to innovate rather than solve big problems or correct for market failures. The ultimate goal of innovation seems to be more innovation.”

Recently, in an (excellent) IP and TWAIL webinar held by the AfronomicsLaw blog, Jacquelene Mwangi from Harvard Law School, spoke about ‘social innovations’. She very succinctly pointed out a very crucial difference between ‘regular’ innovations and social innovations, when she referred to social innovations as ‘innovation which changes power’. I found this a very helpful way of thinking about ‘social innovations’ – more than the more vague concept of ‘innovations which help people’. In a world with ever-increasing inequality, if one starts to re-look and re-examine innovation and incentive systems, that seems like a fascinating place to start this thinking process from. In a follow up conversation, she was also generous enough to share a reading list with me, for more on these lines, and I’ll leave those suggestions here (along with some of her comments, paraphrased), for readers who may be interested in more on this lens.

If readers have more suggestions, please feel free to leave them in the comments below!