[This post has been co-authored with Praharsh Gour. His previous posts can be found here.] 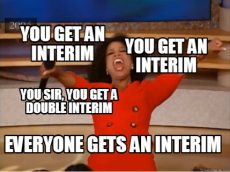 (Someone somewhere had already made this meme! Found here)

India’s tryst with interim injunctions in high tech patent disputes is a long, problematic one, as covered several times in this blog.  Despite all the issues pointed out, and despite courts stating that it should be used judiciously, it probably surprises few observers to see it being used too frequently. Over the course of this two part post, we will first try to provide an overview of the interim injunction minefield, as it were, including several of the points put forward by various authors on this blog over the years, and then look towards some possible remedies for this.

A study by Prof Ramakrishna Thammaiah looking at patent cases between 2000 to 2016 in High courts across the country, notes that in about 60% of the cases (36/59) where an application for an interim injunction has been filed, the courts have granted it. Praharsh and Rishabh Joshi (a former intern with SpicyIP) manually went through the PTC Journals for 2016-19 and found that of the 13 patent cases heard in the High Courts in this period, interim injunctions were granted in 5.

And what happens to those interim injunctions? Prashant and Aparajita, who combed through 143 patent suits, instituted between 2005 – 2015 at the High Courts at Bombay, Delhi, Madras, Calcutta and Gujarat, noted that only 5 judgments were delivered in this period – underscoring the massive delays that happen (despite, as they point out, Justice Katju’s order that trials in all IP cases should conclude within 4 months!). Research compiled by the SpicyIP team that had worked on the i3 series (“interrogating interim injunctions”) points towards several ‘interim’ injunctions which have lasted more than a couple of years! Vifor v. D Mohan was the standout example here, wherein the injunction lasted for more than four years!. We are in the process of updating this data and at a later point, we’ll try to bring out more of  the egregious examples, as well as problematic patterns over the years.

Various posts on SpicyIP have looked into these problematic interim injunctions in the past (indicatively, by Namratha here, by Shamnad here and by Saahil here). Shamnad had also strongly argued for doing away with this interim phase altogether in complex matters, in an earlier blog post here, as well as in this paper jointly authored with Jay Sanklecha and Prakruthi Gowda.

In the context of broader patent policy vis-a-vis development, there may even be more to this debate. The 2017-18 Annual Report of the CGPDTM (“Patent Office” – which for some reason has yet to publish the Annual Reports for 2018-19, and 2019-20) shows that:

i) of the 13,045 patents granted that year, only 1937 were granted to Indians/Indian entities.

(Tangential note: The Annual Report on Page 31 also notes that only 12,246 patents are shown as being worked in India, out of the 56,764 patents. Those interested in interim injunctions in this context may be interested in this new paper by Sandeep Rathod. It is outside the scope of the current posts though).

In other words, the development and technology transfer promise of the TRIPS Agreement is still far from being realised, with so few Indian patent holders even 15 years after India’s become a TRIPS compliant country. In this light, interim injunctions which unfairly prevent or delay indigenous activity (patented or not) are also worth noting as possible contributors to this failure. This is of course a topic that requires more investigation and detailed nuancing – perhaps a question we can look into in the future. Nonetheless, the question is one worth considering.

While there has been some consensus (at least on paper) that interim injunctions are to be granted only in exceptional circumstances, things are less clear when it comes to translating that into reality. Nonetheless, there are usually three criteria that the court must look into while considering these grants: (i) prima facie case, (ii) irreparable injury, (iii) balance of convenience. In matters of pharmaceutical patents, courts have opted for an additional criterion i.e. (iv) assessment of the impact of the proposed injunction on public interest. As pointed out by Shamnad in the above link, and Maitreyee here, there is inconsistency in interpreting the scope and matter of these heads. Applications for interim injunctions are (to be) decided within a very short span of time and are occasionally ex parte i.e. without the presence of the defendant. With respect to ‘public interest’, the principle of audi alteram partem is unfortunately a difficult one to implement in this framework where private rights have public interest fallouts. This leaves it up to the court to watch out for the irreparable harm that may be happening to the larger public interest, including those whose lives (or deaths) may be depending on the medicines in question. It is therefore vital that court-imposed changes to the status quo during the interim period, be imposed only in very carefully considered circumstances. As Adarsh’s argument here shows, even understanding ‘public interest’ is more than a black and white matter, with possibilities for ‘public interest’ aligning with the patentee’s position in some situations, and in other situations – possibilities for multi-faceted application of ‘public interest’ aligning with defendant’s position, beyond just the mere ‘price-differential’ factor.

There is also the need to watch out for clever litigation tactics that are sometimes employed. As discussed by Sandeep Rathod (here) and Prof. Yogesh Pai (here), the recent past has seen a hike in the number of pharma patent cases where the case is instituted against an individual as the first defendant, rather than the supposed infringing generic company. Pointing towards data put forward in Sandeep’s paper, both authors say that while these individuals usually do have some nexus with the entity, the intention seems to be more to create an impression of the defendant being a ‘fly by night’ party or a party with not much to lose.

While there is much that can be said on all of these 4 factors, for now we’ll just highlight one issue regarding developing the prima facie case. Due to the ‘presumption against validity of a patent’ rule  (under Section 13(4) and upheld by the Supreme Court here), courts are not expected to automatically assume patent validity in all cases. For instance, in cases where strong oppositions are in process, a court would be at liberty to require the plaintiff to defend the patent afresh. In other cases of course, where there are little to no questions about the patents validity, the court is free to assume that it is valid. (See more on this in the Basheer, Sanklecha, Gowda paper linked above. They additionally note that our courts are vulnerable to the lack of expertise to understand the technical jargon of the pharmaceutical patent claims, which is a problem particularly in ex-parte hearings – more on that later below.)

However, this needs to be seen in consonance with  the seemingly high error rates by the IPO, as pointed out by Prof. Feroz Ali and Roshan John here. The study underlying their article is this 2018 AccessIBSA study suggesting the error rate is as high as 72% for pharmaceutical patents! Along similar lines, Prof. Bhaven Sampat had conducted an empirical study that indicated that the “high standard” for judging the eligibility of an invention for a patent under the Indian Patent Act, in section 3(d) isn’t actually put into practice by the Patent Office. Of course, the statistic alone is not reason to automatically tilt the balance against patentees – but it does give good reasons for courts to be a little more careful before assuming validity. The unfortunate fact is that there is no easy method, barring either drastically fixing the challenges faced by the Patent Office, or just outright challenging the majority of patent applications, to correct for this potentially huge error.

Ex-parte interim injunctions, especially in complex/high tech patent cases, are almost always even more problematic. Indicatively, Shan had highlighted the SC judgment in Ramrameshwari Devi v. Nirmala Devi that laid down circumstances in which ex-partes could be granted. The SC in that case noted, “experience reveals that ex-parte interim injunction orders in some cases can create havoc and getting them vacated or modified in our existing judicial system is a nightmare.” Further, patent specific posts on how problematic ex-parte injunctions can be, include this one by Prashant, and this one by Shamnad. Nonetheless, courts have used the (supposedly) exceptional power to issue ex-parte interim injunctions much more frequently than one would expect in patent disputes.

Order 39 Rule 3A of the CPC prescribes that the court shall ‘make an endeavour’ to dispose of the ex-parte application within 30 days from the date on which it is granted. However, pharma patent disputes are comprised of extremely complex scientific and technical issues which are difficult to resolve in such a short time span, opening the door to errors. The difficulty in successfully establishing all four criteria without looking into substantive questions of law and facts also frequently results in what is essentially a mini-trial. This is despite the Supreme Court in Colgate Palmolive v. Hindustan Lever Ltd. expressly stating “..the court should not attempt to resolve difficult issues of fact or law on an application for interlocutory relief.” (Readers can also refer to Prashant’s post here, for more on this).

In short – determining the prima facie case of infringement of a patent (which might not have been eligible for the protection in the first place) by authorities (who might not be equipped with the technical prowess to address the issue at hand) coupled with the limited time accorded to adjudicate upon the application for ex parte injunction, essentially leaves a wide margin of error. On one hand, this may lead to courts extending this interim process, sometimes to a painful extent. On the other hand, courts may hastily grant what turns out to be an unfair / inequitable injunction, which also may have damaged the business and reputation of the defendant. And of course, in pharmaceutical cases, such injunctions additionally can deprive the public the ability to access medicines that are often exponentially cheaper and sometimes of a lifesaving nature.

In the second part of this post, we shall examine some possible safeguards against these seemingly erroneous interim orders.