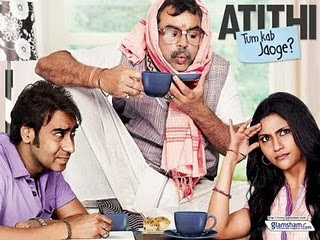 Tania Sarcar, a student of NUJS, Kolkata who earlier blogged for us, has sent in this well researched piece on the various copyright disputes between script-writers and producers/directors.

Yet another controversy involving copyright infringement has come up in Bollywood. This time 75 year old painter-author Aabid Surti has filed a case of copyright infringement before the Bombay High Court against the makers of the 2010 film Atithi Tum Kab Jaoge on the grounds that the film’s story has been entirely copied from his Gujarati novel Bauter Varas No Babo which was later translated into Hindi as Bahattar Saal Ka Bachcha (72 year old child) and which was first published in 1975. Aabid Surti has been fighting the case for the past one and a half years before the Film Writers’ Association. The film in question was produced and distributed by Warner Bros Pictures and Wide Frame Pictures.

The Film Writer’s Association has a two-tier mechanism to deal with matters related to plagiarism. The Dispute Settlement Committee, which is the first tier, ruled after six months, that the story and screenplay of the movie were not inspired by Aabid Surti’s book. However this decision was over-ruled by the Appellate Board, six months later. A HT report on this story is available over here.

In one of the sittings, Kumar Mangat who owns Wide Frame Pictures and screenplay writer Robin Bhatt claimed that the similarities between the book and the film were mere coincidences and that the film was inspired by the late Sharad Joshi’s family and has been taken from there. They also accused Aabid Surti of filing the complaint only for publicity.

The Appellate Board objected to the statement of the film makers that the similarities were merely co-incidences and stated that Surti should be compensated adequately. But the producers only agreed to formally apologize and did not offer any compensation.
If the decision of the Film Maker’s Association is not complied with, they may refer the matter to Federation of Western India Cine Employees (FWICE), which is a film industry workers union in Mumbai.
A recent matter where this was done was in the case of Sanjay Leela Bhansali in regard to his film Guzaarish. The director had been asked by the Dispute Settlement Committee of the Film Maker’s Association to pay a remuneration of ` 10 lakhs to Taabish Romani for allegedly plagiarizing from his script Goonj Uthi Shehnai for his film Guzaarish. They had informed Bhansali that they unanimously came to the conclusion that Guzaarish was lifted from Romani’s script. The committee also pointed out that Guzaarish was similar to Romani’s story in the ‘fundamental, material and substantial plot points’.

The committee also noted that the film’s script submitted to it by Bhansali did not mention the writer’s name although he was credited for screenplay and dialogues.

The apex joint-committee of the FWICE is to sit and hear the matter as an appellate body where due consideration is given to what had transpired at the earlier stage. The parties can then go to court against the decision of the joint committee if they are not happy with the decision.

The DSC had asked Bhansali to pay Romani `Rs.10 lakh as remuneration and by way of damages, and to give him credit in a separate card reading, ‘Story By Taabish Romani’ in all the subsequent copies of the film and film’s publicity material.

The apex joint-committee of the FWICE is to sit and hear the matter as an appellate body where due consideration is given to what had transpired at the earlier stage. The parties can then go to court against the decision of the joint committee if they are not happy with the decision.

Getting back to the Surti case, he decided to move the High Court since he had exhausted all other remedies. He has claimed a compensation of Rs. 1 Crore.

As per Section 14 of the Indian Copyright Act 1957, a literary, dramatic or musical work, not being a computer programme is protected under the meaning of Copyright and the owner of such copyright has the exclusive right and can authorize the making of any cinematograph film or sound recording in respect of the work. In the present case, Aabid Surti claims that it was his story that the film makers of Atithi Tum Kab Jaoge adapted their film from his story without his permission therefore infringing his rights under the Copyright Act.

The present status of the case in the Bombay High Court can be found over here.

The Warner Bros Representatives have been waiting to hear from their legal team in Los Angeles, USA and hence have not commented.