We’re pleased to bring to you a guest post by Tanya Saraswat. Tanya is a 3rd year BBA LLB student at Kirit P Mehta School of Law, NMIMS, Navi Mumbai.

Intellectual property rights, including trademarks, patents and copyright, protect the innovations and inventions of creators from other companies or individuals. Logos come under the wide ambit of trademarks. The trademark protection for a business logo means that no one else can exploit or use it. However, in the same vein, the protection provisions may also get the companies and owners in trouble because of similarities in style with other logos and companies. It can deliver both positive and negative implications on the business community and the society.

Since there are many companies in the world and there are only a handful of shapes and designs that can be used in any standard logo, there should be considerable flexibility in the copyright and trademark law. The key to success in the market is to make sure that the business owners and creators should not intimate what’s already there; instead, they should transform the logos into something new and different.

The trademark protection for logos is territorial and must be sought in every country where the protection is desired. The protection of trademark can be granted on a nation-to-nation basis and can also be in the entire European Union (see here). The Paris Convention is an international treaty that provides crucial priority right to trademark owners, which also includes the logo protection. The convention provides for the right of priority in case of patents, marks and industrial designs. This right provides that, on the basis of a regular first application filed in one of the contracting states, the applicant within six months, can apply for protection in any other contracting state. The benefit of a priority right is that the latter application shall be deemed to be filed on the same day when the former was filed. Hence, while determining any trademark infringement, the courts also consider the priority rights because such applicants have an upper hand in case any other person or enterprise applies for the same mark.

Multi-national corporations have recently started exploiting the legal provisions by filing logo infringement suits against small companies and new start-ups. It has become a trend in the recent past and thus, small-scale companies are facing unanticipated and unreasonable claims by big players. It is unfair for the former companies because the contentions of the latter are unreasonable (as can be deciphered from the mentioned cases) and against the basic principle of freedom of expression and conducting any profession. A survey of recent cases shall depict how huge brands try to weaponize trademark law to suppress the creative expression of smaller firms. 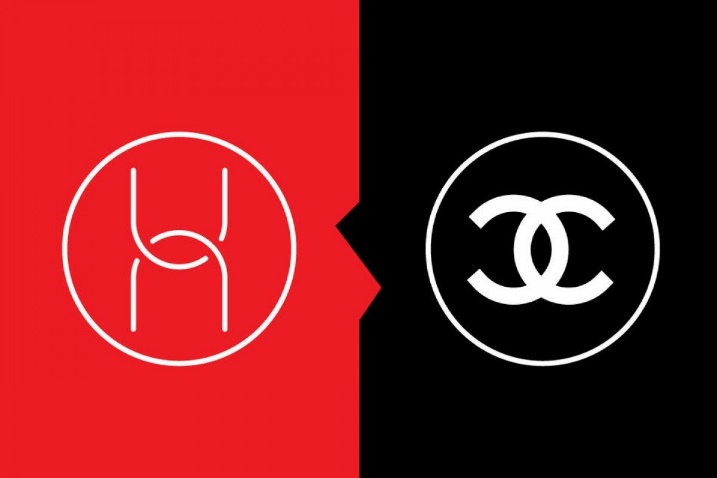 Chanel’s logo is well-known in the minds of many across the globe. Recently, Chanel was unhappy with the new logo of Huawei’s computer hardware because according to the former, the latter’s logo resembled its own (see here). It is true that both the logos contained two interlocking curves inside a big circle but they were visibly opposite of each other. The visible difference could be understood by the thickness and direction of the curves. To substantiate, Huawei’s logo has two vertically interlocked thin curves whereas Chanel’s logo contains two horizontally connected thick curves. Chanel lost its battle before the European Union court battle. The EU General court, Luxembourg ruled in favour of Huawei stating that the logos share some similarities but their visual differences are significant (see here). The exact language of the EU court was: “The figurative marks at issue are not similar.” To explicate, not only do the curves face in a completely different direction but Chanel’s logo also has more rounded curves and thicker lines. Further, the two brands are in different sectors. There is the least possibility of consumer’s being confused after seeing Huawei’s logo on computers with Chanel’s logo. The marks must be compared as applied for and registered, without altering their arrangement or position. 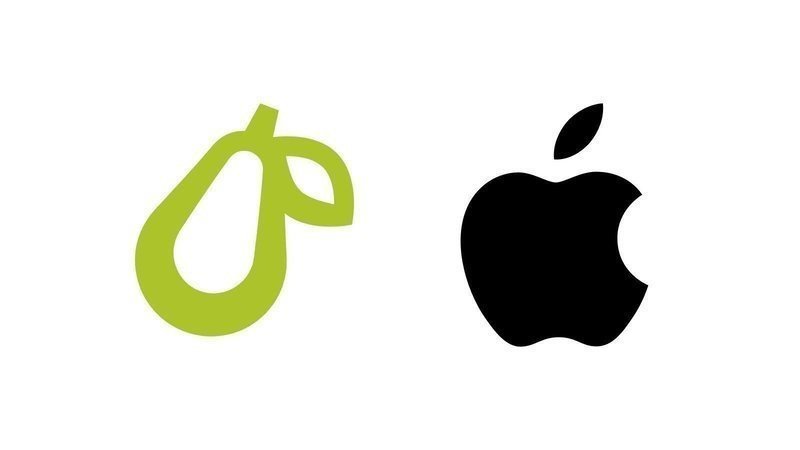 In the instant case, Apple had instituted a suit against a small business for its logo design of a pear (see here).

Prepear is a meal planning app, which has its logo in the shape of pear with a green outline, tilted a little to the right. The plaintiff (Apple) states that the defendant’s (Prepear’s) logo is very similar to its own iconic bitten apple and that the logo design will “cause dilution of differentiation” of the giant company’s logo. Herein, the social media also played a very crucial role. Prepear’s parent company Super Healthy Kids highlighted the said situation on Instagram. The parent company stated that it feels its own moral obligation to take a stand against the giant company’s aggressive legal action against small businesses and fight for the logo. According to Apple, the defendant’s mark consists of a fruit design with a right-angled leaf, which is quite similar to Apple’s famous logo (see here).

Hence, it is very hard to even imagine that consumers cannot identify the visible differences between a pear and a bitten apple. Moreover, it is also not likely that the Apple shall use the icon of an entirely different fruit i.e., a pear for its other products.

Citron sued the Swedish automotive brand Polestar (owned by Volvo and Geely). The logos of both the brands were made up of two silver chevrons. In Citroen’s case, the logos are stacked on top of each other and in the case of Polestar’s, the chevrons are facing towards each other. It is quite clear that there is a visible difference between the logos of both the brands. The overall shape of the logos is also different quite evidently. At a quick glance, the consumers can differentiate between the two, but the bench of Tribunal Judiciare de Paris was not convinced by the same (see here).

Subsequently, Polestar has been handed a fine of $175,000 as well as banned from selling its cars in France for a period of six months. According to the court in Paris, the resemblance between the two is weak. However, the logos of Citroen are well known in France and have existed for more than 100 years. The court also stated that Citroen is a part of the French history and culture and a Sweden newcomer cannot compete with it. The hon’ble court also pronounced that the products of both the brand are identical and Polestar has unmistakably used chevrons in its logo and there are several websites that link both the brands together because of the logos. Hence, Polestar has infringed the exclusive rights of Citroen (see here).

The distinctive attribute of this case is that even after having no close similarities in the logo, Polestar had to stop its production in France for a period of six months. This cannot be a fair verdict because the devices are not sufficiently similar and thus, a criminal penalty cannot be justified. Polestar may not be a well-known brand in France but it has an established reputation and the judgment was an unintentional harm to the same.

The logos of companies act as their source of identity and therefore, each logo should be different than others. There has been a trend in the logo infringement cases that has also been observed by the author in this article. This trend is that the giant companies go after smaller companies and start-ups with a collection of baseless arguments, in a bid to broaden the scope of their brand and cash in on the consequential benefits that flow from the same. The difference between a pear and an apple is quite evident to customers but maybe not to the executives at apple. The judges can also make a mistake and pass an illogical and unreasonable order. A ban on the production in a particular country based on some countless unreasonable arguments is unfair and arbitrary. The giant companies do not consider the financial problems that the small companies might face where the process itself is the punishment. These companies already face capital issues and such lawsuits might exhaust their resources entirely. Empathy is also, and should be, a part of this competitive world.