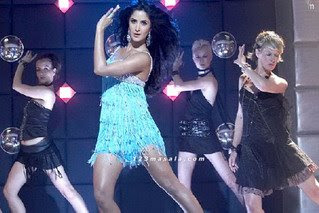 Once again Bollywood music directors are being accused of copyright infringement. Sheela Narayanan & Chang May Choon of The Electric New Paper Show (interesting name!) were the first and so far only media outlet to report that Sony BMG has initiated legal proceedings against Tips on the grounds that Pritam’s ‘Zara Zara Touch me….‘ song (featuring the drop dead gorgeous Katrina Kaif in the video) from this year’s Bollywood blockbuster Race has been ripped off from a tune composed by Wang Lee Hom, the rights of which are owned by Sony BMG. According to The Electric New Paper Show, Sony is suing Tips for copying the tune, adding lyrics to it, incorporating it into a movie, playing it on radio stations and TV channels and commercially selling it. They’re allegedly claiming whopping damages of $ 451,953. Read the rest of this excellently researched report here.
Moving on to other Bollywood news: Shah Rukh Khan’s blockbuster Om Shanti Om is facing its own problems regarding accusations of script-lifting also known as copyright infringement. Anshika Misra of DNA India reports that: 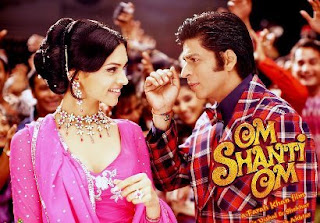 Ajay Monga, who has written the scripts of films like Corporate and the forthcoming Fashion, has filed a suit in Bombay High Court, alleging that OSO is a copy of a script he wrote. Alleging copyright infringement, Monga’s suit states that he had wanted Shah Rukh to play the lead role in the film, and gave a copy of the script to his company — Red Chillies Entertainment — in December 2005, but got no response. Monga’s action may seem belated given that OSO was released in November. However, he has stated that he filed complaint with the Script Writers’ Association in December itself. He decided to file a suit in the HC on August 2 after learning that the film is slated for a worldwide television release on August 10.

Apparently the Script Writer’s Association had already dismissed the complaint as having no basis. Mongia has reportedly filed a suit against King Khan’s Red Chilli Entertainment alleging copyright infringement. It should still be interesting to note how the Bombay High Court would deal with this case.

This news is a bit stale but still, its news: The ET had reported a month ago that two entertainment majors Percept Picture Company & UTV have entered into a major copyright dispute r 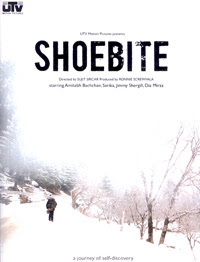 egarding UTV’s new movie ShoeBite (consequently renamed Johnny Mastana). Initially Percept had engaged Director Shookit Sircar for UTV on the basis of the same script. The Delhi High Court granted a stay in favour of Percept restraining UTV from releasing the movie. Hopefully both companies enter into some agreement since it doesn’t make sense to can a movie, the shooting for which has already been completed.

Thats all for now folks!