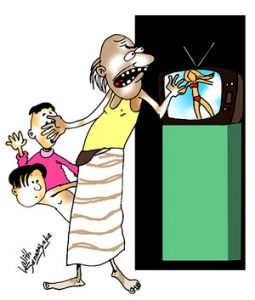 Obscenity under  the Indian Penal Code (“IPC”) is a relic of India’s colonial past. Though the need for such a provision is often subject to debate, it is indisputable that the judiciary’s interpretation of this provision has been often been anachronistic in past instances. The judiciary has, no doubt, evolved from the infamous Hicklin Test (tendency of the impugned material to deprave and corrupt those whose minds are open to such immoral influences) to the contemporary community standards (testing the impugned material against contemporary national standards and not by the standards of sensitive people). However, the latter test has still been criticized for its vagueness and subjectivity.

In examining the treatment of obscenity under IP law, it is not surprising to unearth that it suffers from similar legal lacunae, lack of clarity and skewed opinions of morality, as shall be demonstrated by the following instances.

In a guest post on SpicyIP, Justice Gautam Patel considered the hypothetical example of extending copyright protection to content which would be “obscene” under the IPC. In his discussion, he raised an interesting question: Does the legality of the content have any impact on whether it should receive copyright protection? He noted that the Indian Copyright Act makes no mention that the content which is sought to be protected must be “lawful”. Does this imply that illegal content, and for that matter “obscene” content, can be copyrighted? In his response to Justice Patel’s post, Professor Sarnoff opined that, in such cases, it must be seen whether the existing legislative and constitutional framework allows for the judiciary to examine the legitimacy of the content. No legislative or judicial clarification has, however, been given on the same and hence, the question of whether the legality of content impacts copyright protection in India remains an unsettled one.

Recent posts on SpicyIP have dealt with the disturbing attitude of the IPO in its denial of a patent grant to a creative and unique sex toy.  In its decision, it claimed that the sex toy was not patentable according to Section 3(b) of the Indian Patents Act since its use would affect “public order” and “morality”. Claiming that sex toys were neither “useful” nor “productive”, it went on to brand sex toys as “obscene” objects and state that the sale and import of them would be illegal under Section 292 of the IPC.

Section 9(2)(c) of the Indian Trademarks Act prohibits the registration of a trademark which consists of “scandalous or obscene matter”. A quick look at the Draft Manual of Trademarks Practice and Procedure(“Draft Manual”) reveals that “scandalous marks” are ones which offend “accepted principles of morality”. The Proposed Trademark Manual for Comments(“Proposed  Manual”) states that whether a mark is obscene or not  is a “question of fact and it is for the applicant to demonstrate that it is not so when faced with objections” under this Section.

“If a mark is merely distasteful an objection under Section 9(2) (c) is unlikely to be justified whereas if it would cause outrage or would be likely significantly to undermine religious, family or social values then an objection must be raised.”

Further, in his assessment of the trademark, the Examiner is required to be objective, not subjective.

The above discussion gives rise to the following conclusions:

Unlike the Indian Patent Act and the Trademarks Act, the Copyright Act does not make any reference to the morality of the content which necessarily implies that the Copyright Office and Courts cannot assess the morality of the content sought to be copyrighted. Assuming, however, that  the legality of the content needs to be assessed in India, the main problem would arise when legal institutions attempt to blur the distinction between obscenity as an offense under the country’s penal laws and their personal opinions on morality and public policy. A recent Israeli Magistrate Court ruling in the case of Sex Style v. Abutbul serves as an example of this. In this case, the plaintiff, a producer of pornographic movies, sued the defendant for providing links to the producer’s porn movies on his own website. While the Court recognized the movies were entitled to copyright protection, it refused to extend the same. In its discussion, though they ruled that the content was “obscene” and hence illegal under their Penal Code, they went on to base their decision on a number of other moral and public policy considerations. This leads to the question: Would the Indian Court, faced with a similar factual scenario, adopt a similar approach and examine the morality of the “obscene” content which is sought to be copyrighted? Given the tendency of the Indian Courts to base its decisions on traditional notions of propriety and decency, I would not put it past them.

It is clear that the Courts and IP law offices should not be allowed to use the garb of the law to pontificate about their opinions on morality. Surprisingly (or not), the same has been done by the IPO in the above-described case of the rejection of patent grant to a sex toy in its interpretation of the term “obscene” and “useful”. As explained in the post, the IPO’s conclusion merely applies the bare interpretation of Section 292(1) and does not apply the presently accepted contemporary community standards test to reach its conclusion that sex toys are “obscene”. The IPO also deliberates on the law’s negative attitude towards sexual pleasure and other unrelated grounds to reach its faulty conclusion (more of which can be read here).

As pointed out in a previous post, the interpretation of Section 9(2)(c) by the Patents and Trademarks Office is decidedly vague. How is one to determine these “accepted principles of morality”? The Proposed Manual vaguely states that it is hard to define these principles and “general principles applied in UK” would be relevant in determining them. Also, as pointed out in the post, how is the Examiner supposed to remain objective in his examination when he is provided with fairly subjective standards such as “distaste” and “outrage”?

It is important to note that I am not questioning the law here and whether the law should dictate moral standards (and hence, I am not reproducing the Hart-Devlin debate in this context!). My conclusion is this: Faulty and vague interpretation of existing legal provisions dealing with obscene/scandalous content ultimately leads to imposition of arbitrary moral standards in IP practice. As has been rightly pointed out by the Supreme Court itself, courts have often used the obscenity provision under IPC to appoint themselves as guardians of morals. Indians can certainly do without more such self-appointed “moral guardians” in the realm of IP law!