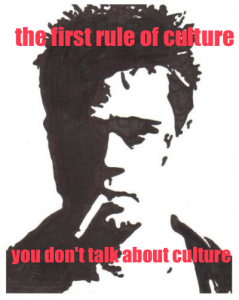 Can a culture die? It’s debatable.

Can a culture be erased from the memories of the public and/or assimilated completely into a dominant culture? When we think of the loss of several Indian languages, the whitewashing of our favourite Disney heroes, the loss of cultural identities of indigenous people across the world and other similar instances, it seems quite plausible, doesn’t it? And this issue lies at the heart of the discourse surrounding cultural appropriation. Quite simply put, cultural appropriation is the use of a cultures’s symbol, artifact, ritual etc. from a different culture, often without giving adequate compensation to the source community for such usage and/or resulting in the perpetration of negative stereotypes. This term and its implications has, however, faced severe backlash from various critics. Most cases are said to amount to harmless acts of “cultural exchange” or “cultural borrowing“. It hence becomes crucial to differentiate between genuine cases of appropriation which require public attention and legal consideration and baseless allegations used to pull off publicity stunts.

Protection of Cultural Expressions and IP-Is there a Link?

The best way to protect such cultural facets would be to protect them as Traditional Cultural Expressions (“TCEs”), provided they fall within the scope of the term. In its documents prepared for its 39th Session to be conducted in March 2019, the Intergovernmental Committee on Intellectual Property and Genetic Resources, Traditional Knowledge and Folklore of the WIPO has described TCEs as “tangible and intangible forms in which traditional knowledge and cultures are expressed, communicated or manifested” (the exact definition can be found in their Draft Articles here). The Committee also provides two kinds of protection for TCEs:

(1) Positive Protection: This refer to the use of IP and non-IP approaches to “prevent others from gaining illegitimate access to traditional knowledge” and to build up self-made enterprises based on these expressions.

(2) Defensive Protection: This refers to a “set of strategies to ensure that third parties do not gain illegitimate or unfounded intellectual property rights ” over such expressions.

The problem with IP approaches to such cases are that IP laws is most countries do not recognise such situations. For instance, if we examine the legal situation in India, we find that our IP legal framework is ill-equipped to protect TCEs, as has been elaborately discussed by Sreyoshi in an earlier post on cultural appropriation.

For more clarity on legal intricacies involved in cases of cultural appropriation, the following two sections lay out recent instances where such allegations have cropped up.

Remember the scene where the Narrator in the  film, Fight Club,  remarks that “everything’s a copy of a copy of a copy“? This adage seems to literally apply when it comes to this world-famous bi(kiini)! Fashion lovers and active Instagram users may be aware of the popular Victoria’s Secret Crochet Trim Teeny Triangle Bikini Top and the Crochet Trim Cheeky Bottom. Available in bright hues, composed of tiny, yet well-fitted dimensions and clothing and complete with a distinctive crochet-and-elastic finish, the bikini is certainly eye-catching and unique. These bikinis, however, have been labelled as rip-offs of the Kiini bikini. The Kiini is an equally famous brand of bikinis promoted by several celebrities and made famous on Instagram and other social media outlets. Ipek Irgit, the owner of Kiini, filed a suit against Victoria’s Secret in 2015. The suit was later put to rest via a confidential settlement in 2017. In 2018, Ms. Irgit sued Neiman Marcus and two other swimwear companies for unfair competition and for violating Kiini’s trade dress. The lawyer representing Marcus and the companies, Jason Forge, did a bit of digging and uncovered interesting tidbits about the making and evolution of the Kiini, all of which can be found in this engrossing New York Times article. The long and short of it is that the Kiini is apparently a knockoff too! Maria Ferrarini, an independent street artist hailing from Brazil, started weaving and selling these colourful crochet-and-elastic bikinis way back in 1994. Apparently, her bikinis “inspired” the famous Kiini (and other knockoffs too, it seems). After this information came out in the public, Ms. Irgit dropped the suit and Ms. Ferrarini was adequately compensated. Though it’s not clear if this handmade crochet-and-elastic design can be considered to be a traditional cultural expression, some commentators have termed this as a classic case of cultural appropriation. And that’s not the end of the story (or knockoffs) yet. According to this report, Liverpool-based, fashion e-tailer MissPap is selling bikinis which look highly similar to Kiinis. And at much cheaper rates, too!

Hakuna Matata…It means no worries for the rest of your days-Apparently not for Disney!

Often quoted by the lovable Timon-Pumba duo in the Lion King movie, this catchy Swahili phrase (which literally translates to “no trouble”) became almost as famous as the movie. This phrase is also reportedly used often in common parlance by Swahili speakers. In 1994, Disney applied for a trademark on this phrase and the same was granted in 2003. In 2018, tens of thousands netizens signed an online petition which decried the grant of this trademark as yet another act of cultural appropriation, colonialism and robbery and termed it as “an assault on the Swahili people and Africa as a whole“. It has also been revealed that a Kenyan band had used this term way back in 1982 in a famous musical composition. Although Disney’s trademark of the phrase is justified under trademark law,  it does lead to a number of ethical dilemmas about theft of ideas, language and culture.

I can go on and on about various other interesting cases which have arisen recently (for instance, this bikini has been alleged to promote fetishisation of Asian women and the photographer Charles Freger is being accused of cultural appropriation for his recent works). For the sake of brevity however, I’ll limit the scope of my discussion to these two examples. The conclusions which can be drawn from the above discussion are:

Given the various conceptual and legal uncertainties underlying cases of cultural appropriation, more discourse is required on the same for a uniform and workable legal framework for protection of cultural expressions. As Prof. Basheer puts it in his article, the need of the hour is a finalised WIPO text “that would not only prevent the cross-border misappropriation of cultural expressions, but also permit indigenous communities to proactively leverage their intangible wealth“.